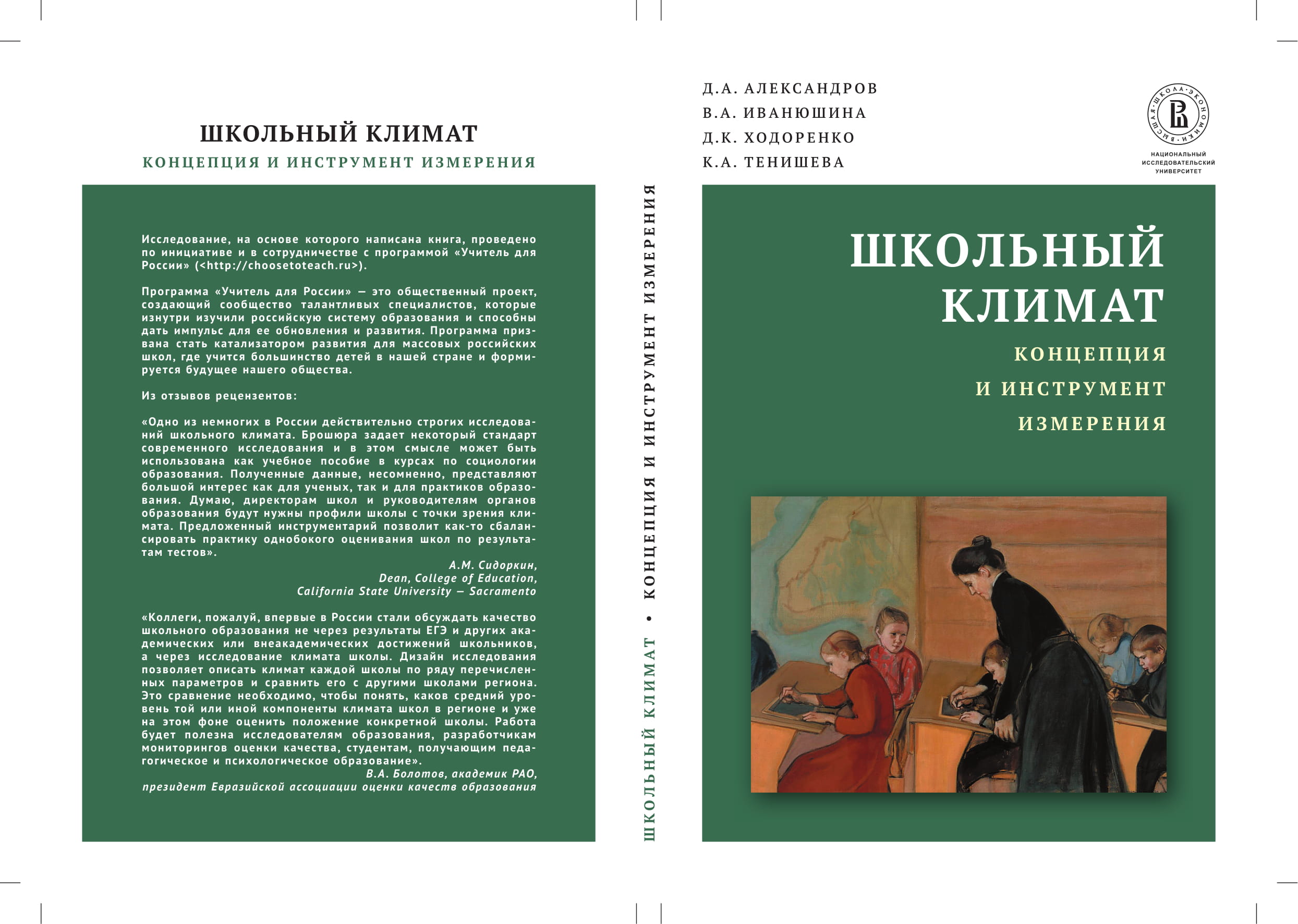 The requirements of the «Journal of Educational studies» to the publications with results of development of any assessment tool are set out. The term «tool» is used here as a superconcept of widespread forms of standardized evaluation procedures, such as a test, questionnaire, scale, methodology, etc.

The article is dedicated to the analysis of school and family factors’ correlation with adolescent’s aggressiveness. Parental education and financial status of family were used as indicators of socio-economic wellbeing. School climate parameters were measured as relevant school characteristics. Multiple significant correlations of school climate and adolescent’s aggressiveness were found. Significant differences in the level of aggressiveness between groups of respondents with various rates of socio-economic wellbeing were also detected.

This publication presents Russia results in PISA 2018. It also shows the dynamics of PISA scores in the 2000-s. The changes in different types of reading skills are presented as well as the proportion of functionally illiterate students. Besides the scores, the data that describes schools climate, including attitude to school, bullying, discipline in class, are analysed. Some issues related to the provision of schools with resources are being addressed.In addition, the social and territorial inequality of educational outcomes in Russia is described. In particular, PISA 2018 allows us to compare the results of the Moscow region and the Republic of Tatarstan with the average scores in the country. Based on the analysis, authots make basic hypothesis about possible changes in Russian education that can be associated with Russia results in PISA. At the end, the publication proposes  some steps that could help to improve educational outcomes of Russian students. The publication will be interesting to a wide audience of specialists engaged in educational policy and practice, as well as to researchers of educational inequality and education quality factors.

School climate is a significant factor of educational achievement. However, relevant research in Russia is difficult due to the absence of instruments. The paper peeks into the history of the notion of school climate, discussing approaches to defining the term. It also describes the most widespread questionnaires used to measure school climate and provides an analysis of their components. The empirical study is based on the student questionnaire used by the Programme for International Student Assessment (PISA), which should ideally allow measuring a number of school climate aspects. A psychometric analysis based on the methods of confirmatory factor analysis and modern test theory reveals that the structure of school climate indices is different from what questionnaire designers expected it to be. It can not be clearly determined whether the questions reflect the school climate indicators that the questionnaires were supposed to measure. Some statements are worded in such a way that most school students should either agree or disagree with them, without showing any difference in their attitude toward the subject. The scale is unbalanced for the majority of items. The article suggests making some specific steps to improve this instrument

main characteristics of school bullying prevalence in Russia and other countries in the world are discussed in the following paper, as well as classification of bullying roles, bullying consequences and family and school factors of victimisation. The results of the study of school bullying conducted by the Laboratory for Prevention of Asocial Behaviour of the Institute of Education (HSE) on the sample of 891 high-school students, living in 5 Federal districts offRussia are given. According to these results the prevalence of school bullying in Russia is high (75% of the sample have faced any type of bullying in the position of a victim or a bystander at least once in two months before the research). Among the main correlates of school bullying prevalence gender, GPA, socio-economical characteristics of student’s family and factors of school climate are considered.

The phenomenon of school bullying is considered from the point of its connection with the domains of school climate. Main characteristics of school bullying are given, specifically its prevalence, age, gender and socio-economical correlates, as well as effectiveness of most common anti-bullying programmes. Social relationships, both student–teacher and peer-to-peer are discussed as a significant factor of victimisation.   Particularly data on teachers’ perspectives on bullying, their main preferred strategies of coping with respective situations in classroom and characteristics of relations with students which affect the risk of victimisation of the latter are in the main focus. The paper is analytically designed and based mostly on the findings presented in the past 10 years research, both Russian and foreign.

Constructing Identities And Boundaries: Fashion And Clothing Of Working And Middle Class Youth In Contemporary Russia
Margarita Kuleva. Humanities. HUM. Basic Research Programme, 2015. No. 85.
Clothing and fashion play significant role in the process of ageing, and help put bodily experiences in the context of culture. It is especially important for young people as social subjects, who are starting to become independent but do not have sufficient experience and social competences to do this.    This paper explores how youth of middle and working class in Russia use clothing to denote their social identity and construct boundaries.The paper is based on materials of 81 IDI with young people from St. Petersburg.
Экономическая активность населения России в 1990-е гг.
Гимпельсон В. Е. Проблемы рынка труда. WP3. Высшая школа экономики, 2002. № 01.
University Students’ Use of Information and Communication Technologies (ICT) in Russia: A Focus on Learning and Everyday Life
Porshnev A., Giest Hartmut. Seminar.net. 2012. Vol. 8. No. 1. P. 27-53.