In line with previous editions, AAMAS 2016 attracted submissions for a general track and five special tracks: Innovative Applications, Robotics, Embodied Virtual Agents and Human-Agent Interaction, Blue Sky Ideas track, and the JAAMAS presentation track. The special tracks were chaired by leading researchers in their corresponding fields: Onn Shehory and Noa Agmon chaired the Innovative Applications track, Francesco Amigoni and Roderich Gross the Robotics track, Tim Bickmore and Hannes Vilhjálmsson the Embodied Virtual Agents and Human-Agent Interaction track, and Frank Dignum the Blue Sky Ideas track. As a new initiative, the chairs of AAMAS 2016 also solicited articles published in the Journal of Autonomous Agents and Multiagent Systems for the JAAMAS Presentation Track. Only papers that have appeared in the Journal of Autonomous Agents and Multi-agent Systems (JAAMAS) in the 12 months period preceding the AAMAS notification date were eligible. This new track was chaired by Peter Stone.

Jointly with the PC chairs the special track chairs were responsible for appointing the Programme Committee (PC) members and the Senior Programme Committee members (SPC) for their tracks, and they made acceptance/rejection recommendations for their tracks in consultation with Programme Chairs based on input provided by the track PC, SPC, and Area Experts. This year the PC chairs introduced the new role of Area Experts, i.e., SPC members with additional responsibilities, to assist with selecting SPC members for specific research areas, identifying appropriate keywords, and assisting in potential issues during discussion phase. This new role was a success and increased the quality of our SPC and PC, and also the reviewing process in general.

Full paper submissions (8 pages plus bibliographic references) and Blue Sky Ideas paper submissions (4 pages plus references) were solicited for AAMAS 2016. Some of the full paper submissions were accepted as extended abstracts (2 pages). The papers were selected by means of a thorough review and discussion process, which included an opportunity for authors to respond to reviewer comments during a rebuttal phase. All SPC members, Area Experts, and Track Chairs followed and contributed to the technical discussions on the papers they were overseeing. The JAAMAS presentation Track submissions published as extended abstracts were handled by the track chair.

The proceedings also contain 17 Demonstration papers, 13 Doctoral Consortium papers, as well as abstracts of the invited talks and details of some of the awards given.

Chapters
Simulation of Agent-rescuer Behaviour in Emergency Based on Modified Fuzzy Clustering
, in: AAMAS'16: Proceedings of the 2016 International Conference on Autonomous Agents & Multiagent Systems. .: Richland: International Foundation for Autonomous Agents and Multiagent Systems, 2016.. P. 1275-1276.
Although there are various methods and models of agent’s behaviour in emergencies, the problem of the synthesis of the optimal control systems, which can support best evolution strategies for agent-rescuers in emergency characterized by a high level of an uncertainty, is still needed. We developed the simulation of agent-rescuers behaviour in emergencies and proposed an ...
Research target: Mathematics Sociology (including Demography and Anthropology Computer Science
Priority areas: IT and mathematics
Language: English
Sample Chapter
Full text
Text on another site
Keywords: agent-based modelingautonomous systemmultiagent systems 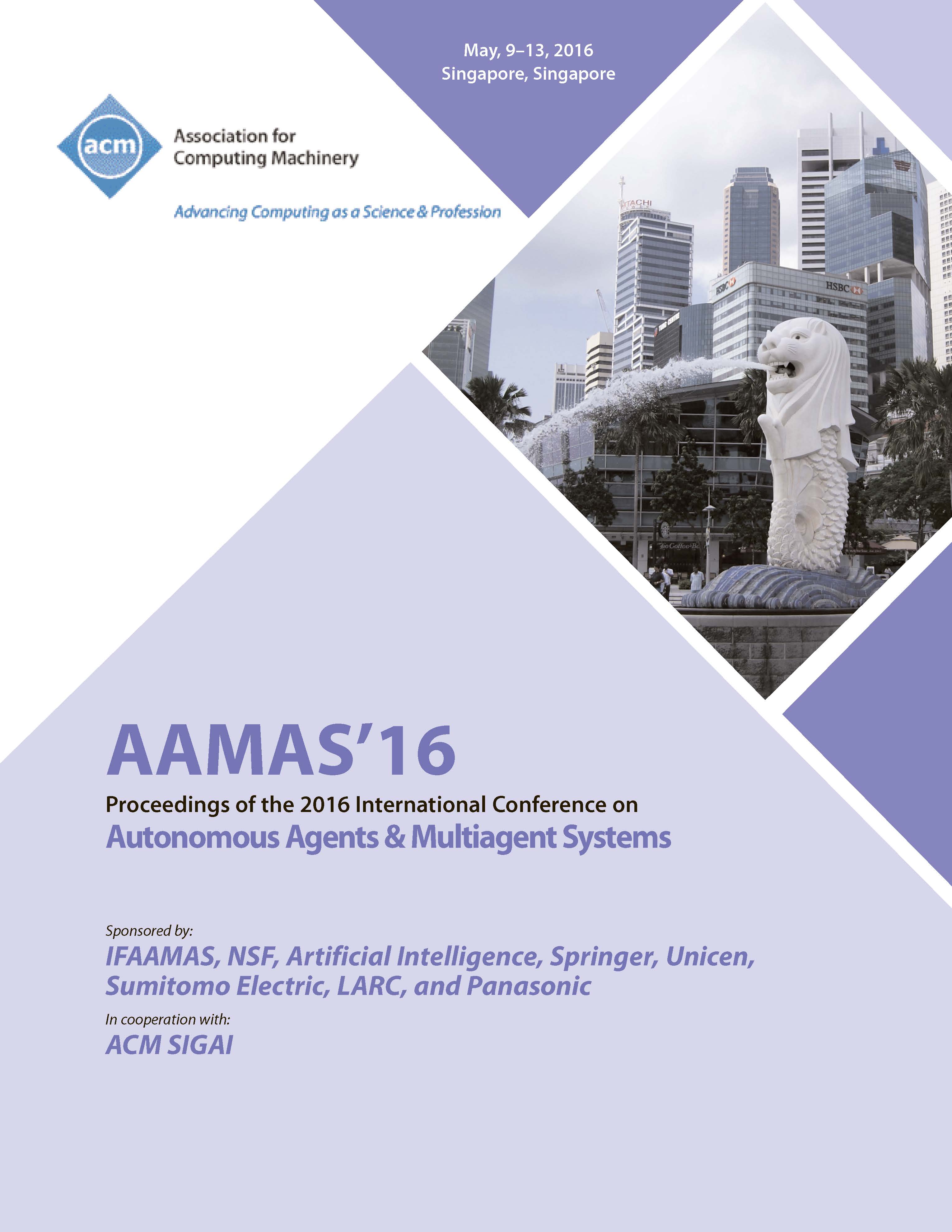