Assemblies of Ta | CD2 | Ta, Ta | Ta | CD2 | Ta | Ta and Nb | CD2 | Nb foils were irradiated 30th pulses of high-argon plasma on the "plasma focus" (PF-4). After irradiation, all the samples were investigated by foils registration recoil hydrogen and deuterium (ERDA) on both sides of each foil. It found redistribution of hydrogen and deuterium in stacks of foils. Experimental results for lung penetration ultradeep gaseous impurities: hydrogen and deuterium are explained based on the effects of shock waves on the foil and accelerated diffusion by an external force. 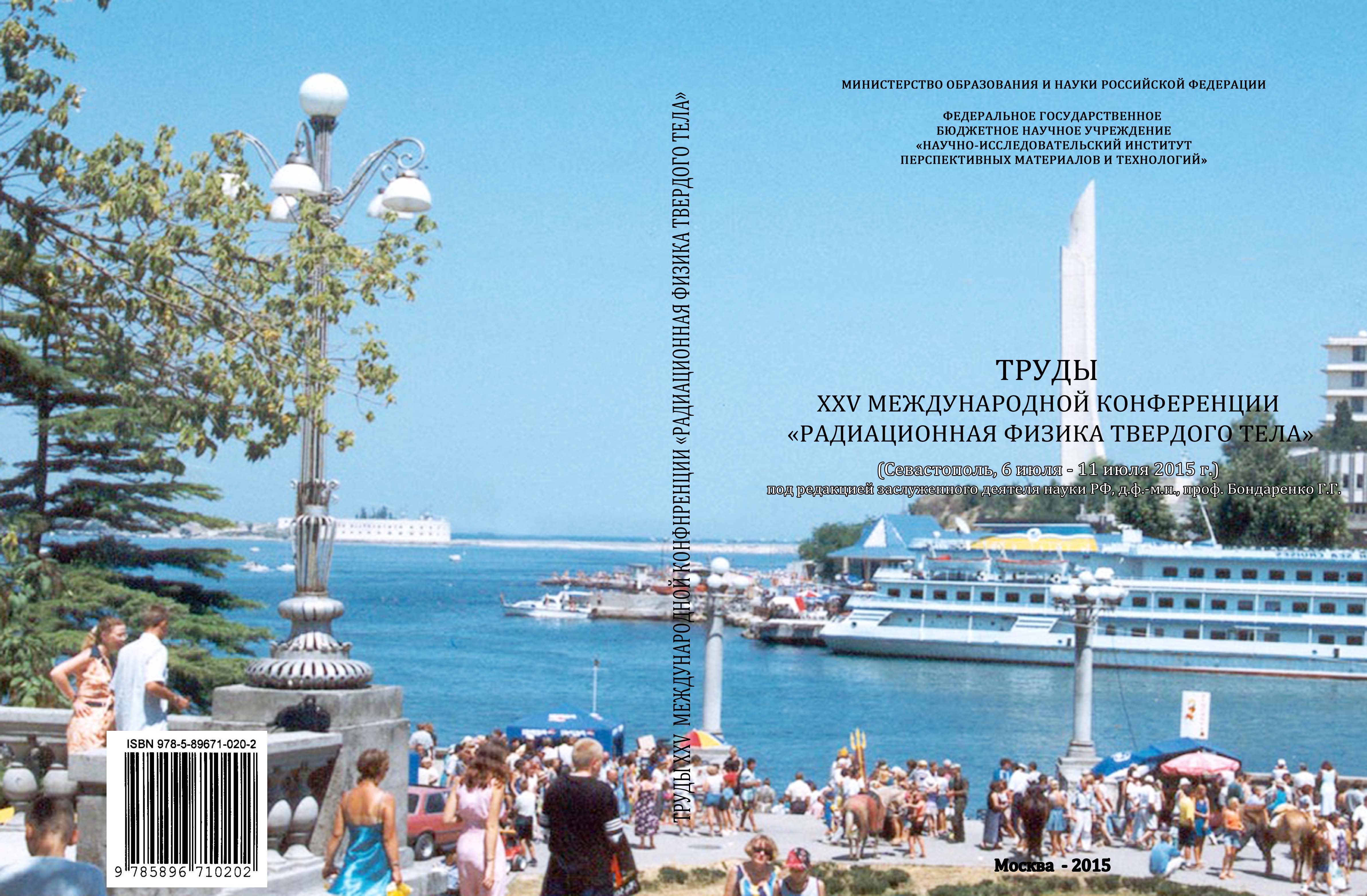 In the works of the conference presented reports of materials dedicated to research the passage of charged and neutral particles processes, X-ray and gamma radiations through matter, electron-atom, atom-atom, ion-atom and others. Collisions in solids, orientation phenomena in the interaction of high-energy particles solid, radiation-induced and radiation-induced phenomena in solids, radiation effects on the physical and chemical properties and structure of metal, semiconductor and dielectric materials, the influence of space factors on the properties of structural and functional materials and spacecraft coatings, radiation-technological methods modification and processing of materials in order to improve their performance properties, creation and production of nano-materials and environmentally friendly materials with low induced radioactivity.

Труды XXIII Международной конференции "Радиационная физика твердого тела" (Севастополь, 8-13 июля 2013 г.), под ред. Г.Г.Бондаренко. М.: ФГБНУ "НИИ ПМТ", 2013 г., 584 с
М.: ФГБНУ "НИИ ПМТ", 2013.
Variable-step-length algorithms for a random walk: hitting probability and computation performance
Klimenkova O., Menshutin A., Shchur L. 2018. No. 1811.03788.
We present a comparative study of several algorithms for an in-plane random walk with a variable step. The goal is to check the efficiency of the algorithm in the case where the random walk terminates at some boundary. We recently found that a finite step of the random walk produces a bias in the hitting probability and this bias vanishes in the limit of an infinitesimal step. Therefore, it is important to know how a change in the step size of the random walk influences the performance of simulations. We propose an algorithm with the most effective procedure for the step-length-change protocol.
Loop groups, Clusters, Dimers and Integrable systems
Marshakov A., Fock V. arxiv.org. math. Cornell University, 2014
We describe a class of integrable systems on Poisson submanifolds of the affine Poisson-Lie groups PGLˆ(N), which can be enumerated by cyclically irreducible elements the co-extended affine Weyl groups (Wˆ×Wˆ)♯. Their phase spaces admit cluster coordinates, whereas the integrals of motion are cluster functions. We show, that this class of integrable systems coincides with the constructed by Goncharov and Kenyon out of dimer models on a two-dimensional torus and classified by the Newton polygons. We construct the correspondence between the Weyl group elements and polygons, demonstrating that each particular integrable model admits infinitely many realisations on the Poisson-Lie groups. We also discuss the particular examples, including the relativistic Toda chains and the Schwartz-Ovsienko-Tabachnikov pentagram map.
XXII научно-технический семинар. Научные материалы для обычной и атомной промышленности и электрической энергии. (Badania materialowe na potrzeby elektrowni konwencjonalnych I jadrowych oraz przemyslu energetycznego, XXII Seminarium naukowo techniczne, Poland, Zakopane, 17-19 czerwca, 2015 roku)
2015.
Лекции по вариационному исчислению
Перескоков А. В., Амосов А. А., Зубков П. В. М.: Издательский дом МЭИ, 2011.
Foreword: Fundamental Problems of High Temperature Superconductivity
Sadovskii M. V., Pudalov V.M. Journal of Superconductivity and Novel Magnetism. 2016. Vol. 29. No. 4. P. 1035-1036.
Dynamics of the Davydov-Scott soliton with location or velocity mismatch of its high-frequency component
Blyakhman L. G., Gromov E., Onosova I. V. et al. Physics Letters A. 2017. Vol. 381. No. 17. P. 1490-1492.