Corporate governance and decision-making in business-groups

This chapter and the following one are devoted to independent legal entities that constitute united companies and are known as business groups (BGs) or holding company groups. In modern economic literature, BGs are defined as “a set of firms which, though legally independent, are bound together by a constellation of formal and informal ties and are accustomed to taking coordinated action” (Khanna & Rivkin, 2001, pp. 47-48). Russian law defines a parent company and its subsidiary, which together constitute a holding company group, as a pair of agents, one of which, namely, the parent company, has sufficient authority to determine the decisions of another based on ownership rights or any other type of control rights.  In this respect, both terms, BGs and holding company groups, are synonymous.
In Russia, the term “business group” usually applies to legally independent entities under the same control that were historically independent businesses and have experience acting independently. BGs are sometimes considered to be newly established integrations that occurred after privatization.
In this book, a business group is defined as a set of legally independent entities joined by ownership rights. The set of entities (enterprises) is under control of the ultimate owner (or small groups of interrelated ultimate owners) or parent company. No distinction is generally made between BGs founded during the Soviet times and those established in mergers during the economic upturn that started in 1999 after the completion of a mass movement of privatization. 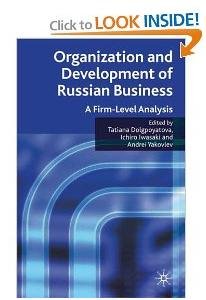