The fuzzy representation of prior information for separating outliers in statistical experiments. 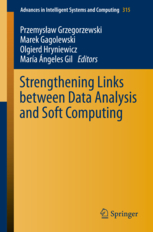 The definition of a phoneme as a fuzzy set of minimal speech units from the model database is proposed. On the basis of this definition and the Kullback-Leibler minimum information discrimination principle the novel phoneme recognition algorithm has been developed as an enhancement of the phonetic decoding method. The experimental results in the problems of isolated vowels recognition and word recognition in Russian are presented. It is shown that the proposed method is characterized by the increase of recognition accuracy and reliability in comparison with the phonetic decoding method

This volume contains papers presented at the 13th International Conference on Rough Sets, Fuzzy Sets and Granular Computing (RSFDGrC) held during June 25–27, 2011, at the National Research University Higher School of Economics (NRU HSE) in Moscow, Russia. RSFDGrC is a series of scientific events spanning the last 15 years. It investigates the meeting points among the four major disciplines outlined in its title, with respect to both foundations and applications. In 2011, RSFDGrC was co-organized with the 4th International Conference on Pattern Recognition and Machine Intelligence (PReMI), providing a great opportunity for multi-faceted interaction between scientists and practitioners. There were 83 paper submissions from over 20 countries. Each submission was reviewed by at least three Chairs or PC members.We accepted 34 regular papers (41%). In order to stimulate the exchange of research ideas, we also accepted 15 short papers. All 49 papers are distributed among 10 thematic sections of this volume. The conference program featured five invited talks given by Jiawei Han, Vladik Kreinovich, Guoyin Wang, Radim Belohlavek, and C.A. Murthy, as well as two tutorials given by Marcin Szczuka and Richard Jensen. Their corresponding papers and abstracts are gathered in the first two sections of this volume.