Decentring the West: The Idea of Democracy and the Struggle for Hegemony

We live in a world where democracy is almost universally accepted as the only legitimate form of government but what makes a society democratic remains far from clear. Liberal democratic values are both relativized by the self-description of many non-democratic regimes as 'local' or 'culturally specific' versions of democracy, and undermined by the automatic labelling as 'democratic' of all norms and institutions that are modelled on western states.

Decentring the West: The Idea of Democracy and the Struggle for Hegemony aims to demonstrate the urgent need to revisit the foundations of the global democratic consensus. By examining the views of democracy that exist in the countries on the semi-periphery of the world system such as Russia, Turkey, Bolivia, Venezuela, Brazil and China, as well as within the core (Estonia, Denmark and Sweden) the authors emphasize the truly universal significance of democracy, also showing the value of approaching this universality in a critical manner, as a consequence of the hegemonic position of the West in global politics.

By juxtaposing, critically re-evaluating and combining poststructuralist hegemony theory and postcolonial studies this book demonstrates a new way to think about democracy as a truly international phenomenon. It thus contributes groundbreaking, thought-provoking insights to the conceptual and normative aspects of this vital debate. 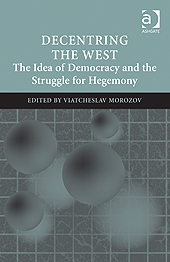