The book is dedicated to the emergence and development of big business in Russia during the period between 1993 and the first half of 2008. Institutional and reproductive factors of its formation and evolvement are analyzed. The book gives a short history of the most significant and well-known business players: integrated groups and companies. It also contains a detailed description of the formative stages of the Russian model of big business in 2000’s under the influence of two major factors: the widening interaction with world financial markets and the transformation of the economic role of the state. 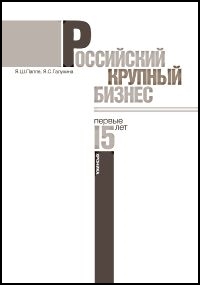