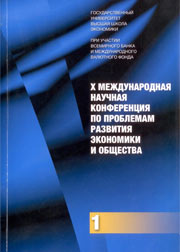 Dynamical Interaction between Financial and Business Cycles
Petronevich A., Billio M. University Ca' Foscari of Venice, Dept. of Economics Research Paper Series. WP/2017. University Ca' Foscari of Venice, 2017
We adopt the Dynamical Influence model from computer science and transform it to study the interaction between business and financial cycles. For this purpose, we merge it with Markov-Switching Dynamic Factor Model (MS-DFM) which is frequently used in economic cycle analysis. The model suggested in this paper, the Dynamical Influence Markov-Switching Dynamic Factor Model (DI-MS-FM), allows to reveal the pattern of interaction between business and financial cycles in addition to their individual characteristics. More specifically, this model allows to describe quantitatively the existing regimes of interaction in a given economy and to identify their timing, as well as to evaluate the effect of the government policy on the duration of each of the regimes. We are also able to determine the direction of causality between the two cycles for each of the regimes. The model estimated on the US data demonstrates reasonable results, identifying the periods of higher interaction between the cycles in the beginning of 1980s and during the Great Recession, while in-between the cycles evolve almost independently. The output of the model can be useful for policymakers since it provides a timely estimate of the current interaction regime, which allows to adjust the timing and the composition of the policy mix.
Научные комментарии к учебнику «Экономика для топ-менеджеров: бизнес-курс МВА/Филип К. Й. Янг, Джон Дж. МакОли»
Аносова А. В., Акимов Д. В., Андронова И. А. и др. М.: Омега-Л, 2007.
От олимпиады к олимпиаде: экономический деловой цикл
Нуреев Р. М., Маркин Е. В. Вестник спортивной науки. 2011. № 1. С. 52-56.