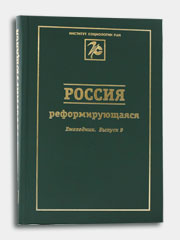 The article is devoted to analysis of discursive practices of public representation and discussion of the political course of “modernization” announced by president Dmitry Medvedev. It is focused at interpretations of the idea of modernization by the leading Russian politicians as well as at the role of the notions about collective past, present and future in its ideological justification and contestation.

Skills Shortages and Training in Russian Enterprises
Lukyanova A., Savchenko E., Tan H. et al. IZA Discussion Paper. IZA, 2007. No. 2751.
In the transition to a market economy, the Russian workforce underwent a wrenching period of change, with excess supply of some industrial skills coexisting with reports of skill shortages by many enterprises. This paper uses data from the Russia Competitiveness and Investment Climate Survey and related local research to gain insights into the changing supply and demand for skills over time, and the potential reasons for reported staffing problems and skill shortages, including labor turnover, compensation policies and the inhibiting effects of labor regulations. It discusses in-service training as an enterprise strategy for meeting staffing and skill needs, and presents evidence on the distribution, intensity and determinants of in-service training in Russia. It investigates the productivity and wages outcomes of in-service training, and the supportive role of training in firms’ research and development (R&D) and innovative activities. A final section concludes with some policy implications of the findings.
Imperial Political Culture and Modernization in the Second Half of the Nineteenth Century
Kaspe S. I. In bk.: Russian Empire: Space, People, Power, 1700-1930. Bloomington; Indianapolis: Indiana University Press, 2007. P. 455-493.
Elites - the Choice for Modernization
Grigoryev L. M. In bk.: Russia: the Challenges of Transformation. NY: NYU-Press, 2011. P. 191-225.

Stuck Between Surplus and Shortage: Demand for Skills in the Russian Industry
Gimpelson V. E., Kapeliushnikov R., Lukyanova A. IZA Discussion Paper. IZA, 2009. No. 3934.
In order to remain competitive, firms need to keep the quantity and composition of jobs close to the optimal for their given output. Since the beginning of the transition period, Russian industrial firms have been widely reporting that the quantity and composition of hired labor is far from being close to optimal. This paper discusses what kinds of firms in the Russian manufacturing sector are not able to optimize their employment and why. Do they suffer from a labor shortage induced by rapid growth, or are they still struggling with employment overhang? What are the occupations and skills in which there is a supposed surplus or shortage? What factors affect the probability that a firm will report non-optimal employment and be unable to solve this difficulty? Where is the labor excess/shortage concentrated and what makes it persistent? Finally, we discuss the costs of non-optimal employment. The analysis presented in this article is based on the data from a large-scale survey of Russian manufacturing firms.
Individual Returns to Training in a Russian Firm
Aistov A., Aleksandrova E. Economics. EC. Высшая школа экономики, 2015. No. WP BRP 101/EC/2015 .
This work is devoted to estimating the individual return to worker's professional training. This empirical research is based on unique monthly data, comprised of the personnel records of workers in a Russian metallurgical enterprise between 2006--2010. Using the original time distributed difference-in-differences technique we control for the effect of workers' mobility and the ``non-parallel'' dynamics of earnings in estimates. A qualitative comparison of mobility in trained and control groups is also made by Kaplan-Meier survival curves. The main factors that distinguish this paper from others are the following. (I) We focused on the internal labour market, concluding that it has common peculiarities of wage setting concerned with training as an open labour market. (II) We show that mobility-friendly training programs give high returns, and not only in transition economies. (III) We suggest controlling for mobility by choosing a corresponding control group. (IV) We use a robust new specification that is reactive to different dynamics of the dependent variable in treated and control groups in difference-in-differences estimates. (V) We compared three different kinds of training and our conclusions could have practical application (at least in Russian context). The best way to raise personal earnings is on-the-job training. The internal mobility caused by retraining courses was the same impact on workers as if they lacked retraining. The wages of workers trained in the same field grow randomly for a few months before and after training. Nevertheless it is difficult to prove the causal effect of this kind of training on wage growth.
Информационно-аналитический интернет-портал российского медико-производственного комплекса как основа интеллектуальной системы управления инновационным развитием МПК
Мешков Н. А. В кн.: . С. 556-561.

The concept of an information-analytical Internet-portal of the Russian medical industrial complex as the basis of the intellectual control system of innovative development of the MIC is stated.