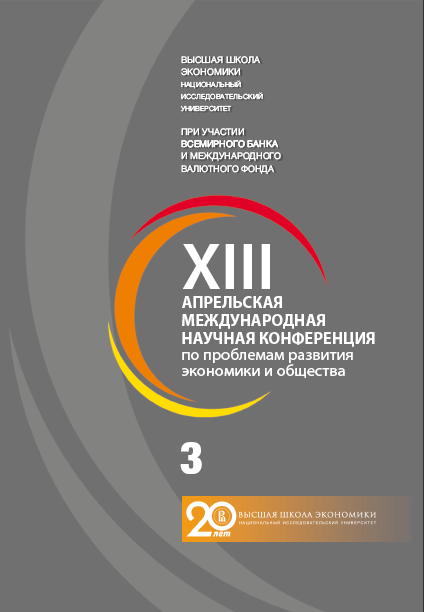 The chapter analyzes the migration processes in Russia in 2013, can be traced trends of internal and international migration in previous years, the conclusions for policy in this area.

Segmentation of Inhabitants in Place Marketing: The Case of Karelian Towns
Rozhkov K. L. Management. MAN. Высшая школа экономики, 2012. No. 02.
Inhabitants become the important target group of place marketing along with other place consumers. The problem of defining criteria for the attractiveness of places for different inhabitants and classification of factors is one of the most important for the marketing policies aimed at development of local communities. The paper shows that the combination of three criteria of place attractiveness (retention and attraction, conditions for external growth and settling) may be considered as the main characteristic of a place market segment that determines its distinctive attributes. Based on these criteria, the heuristic monothetic 3-dimensional typology of market segments and the hypothetic classification of distinctive characteristics of the Russian place market segments were developed. Combination of three demographic indicators (emigration, birth rate, difference of general birth rates and emigration of natives - in accordance with the criteria of place attractiveness) were selected to estimate the place consumers’ behavior in the segments. The results of the empirical study (survey of inhabitants of five Karelian towns) allows us to conclude that both tangible and “intangible” attributes of places can have an impact on the behavior of inhabitants as place consumers. This paper also shows that both those, and others, in turn, depend on market segments, which towns occupy. Study results are important for marketing analysis and marketing policy of Russian towns.
Breaking out of Poverty Traps: Internal Migration and Interregional convergence
Guriev S., Vakulenko E. Centre for Economic Policy Research Discussion Paper Series. ISSN 0265-8003. Centre for Economic Policy Research, 2013. No. 9675.
In this paper, we study panel data on region-to-region gross migration flows in Russia for 1995-2010. We find that barriers to labor mobility that hindered internal migration in 1990s, have been generally eliminated by the end of 2000s. In 1990s many poor Russian regions were in a poverty trap: potential workers wanted to leave those regions but could not afford to finance the move. In 2000s (especially in late 2000s), these barriers were no longer binding. Overall economic growth and development of financial markets allowed even poorest Russian regions to grow out of the poverty traps. This resulted in convergence in Russian labor market in 2000s; the interregional gaps in incomes, wages and unemployment rates decreased substantially and are now comparable to those in Europe.
Моделирование конкуренции в российском банковском секторе с использованием подхода Панзара–Росса: теоретический и прикладной аспекты
Мамонов М. Е. Прикладная эконометрика. 2010. № 4(20). С. 3-27.
Влияние рыночной власти российских банков на их склонность к кредитному риску: результаты панельного анализа
Мамонов М. Е. Прикладная эконометрика. 2012. № 4(28). С. 85-112.
Work-Related Migration and Poverty Reduction in Nepal
Glinskaya E., Lokshin M., Bonch-Osmolovski M. Review of Development Economics. 2010. Vol. 14. No. 2. P. 323-332.

The paper examines trends of internal migration in Russia in the last two decades. Particular attention is paid to the areas of migration and its regional features.

Do Informal Workers Make An Underclass? An Analysis Of Subjective Social Status
Zudina A. A. Sociology. SOC. Высшая школа экономики, 2013. No. 24/SOC/2013.
This article addresses the elaboration of a new approach to informal employment research based on analyzing subjective social status. In spite of numerous studies conducted over the past 40 years many questions still exist in the field of informal employment research. The heterogeneous nature of activities incorporated into the concept of “informality” defines the ambiguity of its impact on the economy and society. Thus, little is actually known about the socioeconomic position of informal workers and the nature of informal employment. Is informality a kind of stratifying mechanism embedded in the social structure that changes the position of the informally employed, or not? The so-called “direct” approach based on analyzing levels of income was considered to be an inappropriate framework and thus indicated that the consequences of informal employment need to be further analyzed together with indirect – subjective – measures. The present paper discusses methodological issues and presents results concerning the subjective social position of informally employed workers in contrast to formal workers, the unemployed, and the economically inactive population. The study was carried out on the basis of a large nationally representative panel: the Russia Longitudinal Monitoring Survey of the Higher School of Economics (RLMS-HSE) for 2000-2010. The existence of three-tier informal employment in Russia is revealed with self-employment being better off than formal employment and informal wage and salary work. No significant difference between informal wage and salary work and formal employment in terms of subjective social status is found. Thereby, one can suppose that the difference between types of employment is not embedded in the social structure at all. Taken as an indirect indicator of the quality formal employment in Russia, this could point to the great weakness of labor market institutions and the idle channels of social mobility of formal employment in Russia.