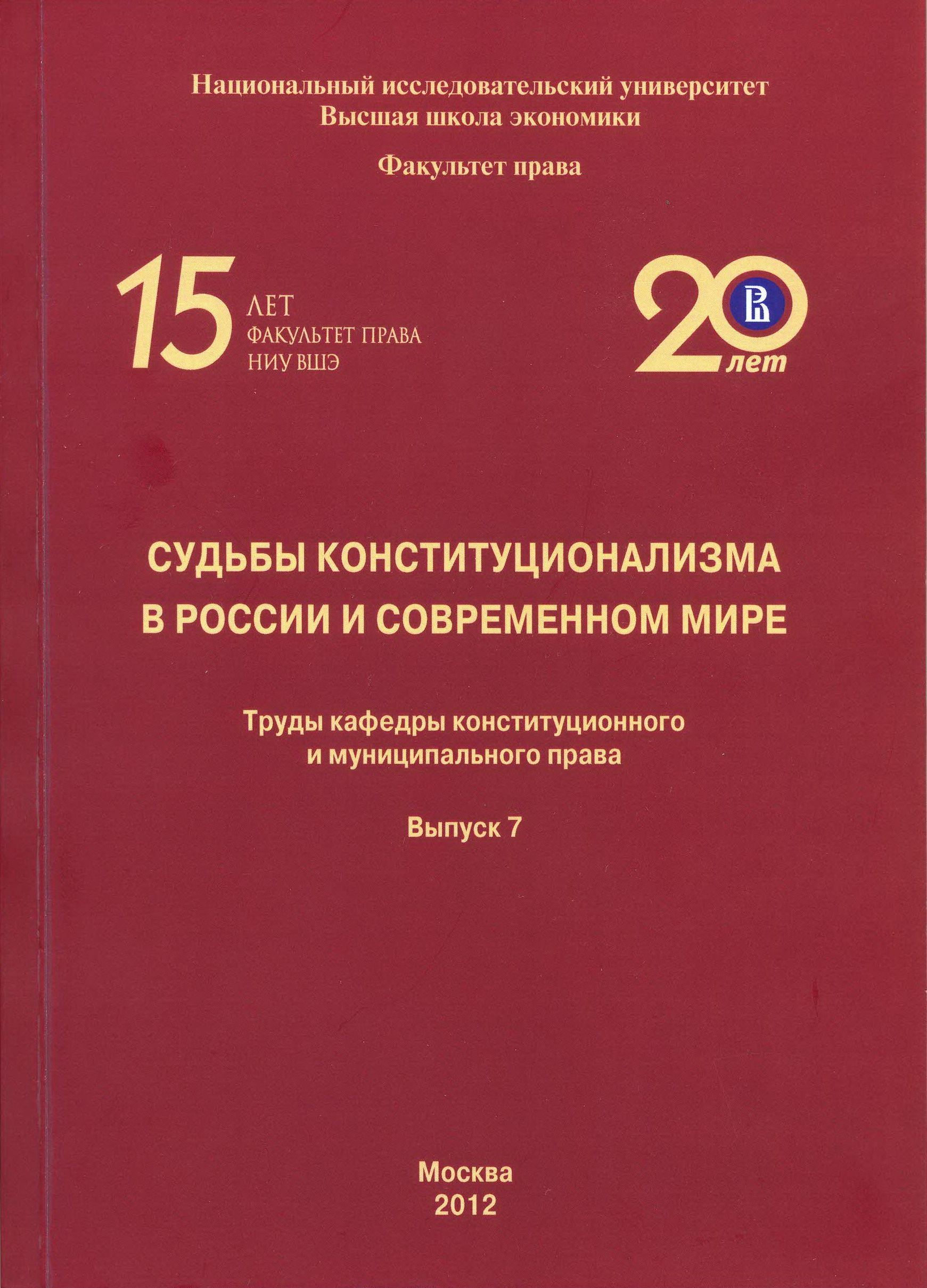 Судьбы конституционализма в России и современном мире
Edited by: М. А. Краснов Вып. 7. М.: Юрист, 2012.
Similar publications
Финансово-экономическое обеспечение функционирования органов местного самоуправления: формирование доходов местных бюджетов
Шварцзайд Е. Р., Подшивалова А. В. В кн.: Социальные технологии в государственном управлении и бизнесе. Екатеринбург: Уральский государственный технический университет, 2009. С. 68-79.
Муниципальное право России. В 3-х частях
СПб.: НИУ ВШЭ (Санкт-Петербург), 2011.
Local Government and Small Business: Mismatch of expectations
Plusnin J., Slobodskoy-Plusnin J. Public Administration. PA. Высшая школа экономики, 2013
The article summarizes the data from a few tens of interviews with entrepreneurs – representatives of a small business. The purpose of the interview was to discover expectations and suggestions from entrepreneurs to the local and state government. Interview data reveal the profound contradictions between the business and the authorities. These contradictions are based not only on results of the local administration’s actions, but also on the specific current status of local (self-)government that makes it impossible to effectively interact with the business. On the other hand, the development of local businesses has led to a peculiar configuration of the business community, also making it difficult to communicate with the authorities. As a result is trying to get protection from the local government that leads to inadmissible merging of business and government and monopolizing of business in almost every district. Direct consequences of such a merging are government inefficiency, lack of incentives for business development, and stagnation. Some “evolutionary stable strategy” has been developed, that does not allow winning any of the actors yet saving them from loses in competition with the outside players. Understanding of the inefficiency and dead-end of such an interaction by some entrepreneurs forces them to raise claims to local authority. Interviews analyses resulted in the list of complaints and suggestions on how to optimize an interaction between the local business and local authorities.
Местное самоуправление: теория и практика с точки зрения институционального подхода
Скалон В. А. Вопросы государственного и муниципального управления. 2011. № 1. С. 37-52.

The Case of “New Moscow”: Metropolisation as a Chance for Local Government System?
Chernenko O. In bk.: Metropolisation, Regionalisation and Rural Intermunicipal Cooperation.. Vol. 8: Collection Kultura. Institut Universitaire Varenne, 2018. P. 345-356.
Improving the quality of municipal service by the example of administrative reforms in the UK and Sweden
Minaeva J. In bk.: Russia and the Council of Europe: Topics for Common Agenda A Look from Norway. Academic Papers of the 10th International Session of the HSE Russian – European Center for Multidisciplinary Research, Oslo, 1-8 August, 2010. M.: INTELCORP, 2011. Ch. 5. P. 252-257.

This chapter presents papers by the participants of the working group “Local Governance and Local Democracy”. Oxana Chernenko, Ass. Prof. of HSE, and Susan Guerra, Municipality of Oslo, Unit for Sustainability, were the academic supervisors of this group, Chuck Hirt, Council of Europe, expert, head of Citizens Network.

The group worked on the following research problems. According to the

European Charter of Local Self-Government (1985), “Local self-government denotes the right and the ability of local authorities, within the limits of the law, to regulate and manage a substantial share of public affairs under their own responsibility and in the interests of the local population”. To what extent does practice of municipal governance in the Russian Federation give us justification of this phenomenon?

aspiration is supported by the regional level of the state government(power). The institute of local authorities institute is different by nature, which causes constantly arising problems with the explanation, and furthermore, with prediction local selfgovernance trends. Absence of a developed methodology does not allow to provide standard consistent recommendations about the structure of municipal authority. The

object of research is still “too young” (despite the deep tradition of self-governance in Russia, not only in rural communities, but also in towns) and still very much dependent on the local social and administrative features, as well as on the territorial and spatial features of the country.

The aim of this project was to study and analyze models of self -governance at the level of local communities through cross-country comparison (especially from a legal perspective) and to see how the European experience can be implemented in Russia.

These issues are discussed in the participants’ papers, including “Reputationbased governance and making states ‘legible’ to their citizens” by Lucio Picci, “Improving the quality of municipal service: cases on administrative reforms in the UK and Sweden” by Julia Minaeva, and “Local Governance in Scandinavian countries: is there a Common Model?” by Svetlana Tokunova.

The article analyzes the constitutional and legal framework guarantees of parliamentary immunity of representative body of local selfgovernment. The author explores the nature and content of institution of parliamentary immunity, focusing on identifying current trends in the growing expansion of rights guarantees of deputies for bringing them to criminal or administrative responsibility, for institution of deputies of various criminal and administrative proceedings. It is noted that the guarantees of rights of deputies must be weighed against the requirements of constitutional principle of equality before the law and the courts.