Double-blind peer reviewing has been proved to be a pretty effective and fair way of academic work selection. However, to the best of our knowledge, nobody has yet analysed the effects caused by its introduction at the Russian NLP conferences. We investigate how the double-blind peer reviewing influences gender and location (according to authors’ affiliations) biases and whether it makes two of the conferences under analysis more inclusive. The results show that gender distribution has become more equal for the Dialogue conference, but did not change for the AIST conference. The authors’ location distribution (roughly divided into ‘central’ and ‘not central’) has become more equal for AIST, but, interestingly, less equal for Dialogue. 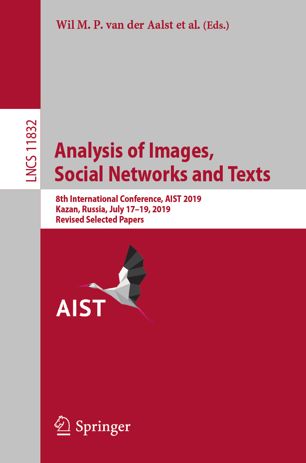 This book constitutes the proceedings of the 23rd International Symposium on Foundations of Intelligent Systems, ISMIS 2017, held in Warsaw, Poland, in June 2017. The 56 regular and 15 short papers presented in this volume were carefully reviewed and selected from 118 submissions. The papers include both theoretical and practical aspects of machine learning, data mining methods, deep learning, bioinformatics and health informatics, intelligent information systems, knowledge-based systems, mining temporal, spatial and spatio-temporal data, text and Web mining. In addition, four special sessions were organized; namely, Special Session on Big Data Analytics and Stream Data Mining, Special Session on Granular and Soft Clustering for Data Science, Special Session on Knowledge Discovery with Formal Concept Analysis and Related Formalisms, and Special Session devoted to ISMIS 2017 Data Mining Competition on Trading Based on Recommendations, which was launched as a part of the conference.

Lemmatisation, which is one of the most important stages of text preprocessing, consists in grouping the inflected forms of a word together so they can be analysed as a single item. This task is often considered solved for most modern languages irregardless of their morphological type, but the situation is dramatically different for ancient languages. Rich inflectional system and high level of orthographic variation common to these languages together with lack of resources make lemmatising historical data a challenging task. It becomes more and more important as manuscripts are being extensively digitized now, but still remains poorly covered in literature. In this work, I compare a rule-based and a neural network based approach to lemmatisation in case of Early Irish data.

The EPiC Series in Language and Linguistics publishes high quality collections of papers in language, linguistics and related areas.