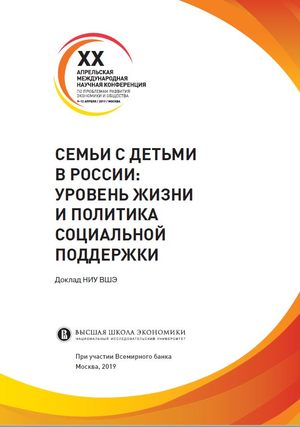 Семьи с детьми в России: уровень жизни и политика социальной поддержки: докл. к XX Апр. междунар. науч. конф. по проблемам развития экономики и общества, Москва, 9–12 апр. 2019 г.
Бирюкова С. С., Горина Е. А., Горяйнова А. Р. и др. М.: Издательский дом НИУ ВШЭ, 2019.
Similar publications
Новые социальные услуги для семей с детьми в Москве: потребности и практика реализации
Савинская О. Б., Истомина А. Г., Чалых К. В. М.: Акварель, 2016.
Fertility and Family Policies in Central and Eastern Europe
Anatoly Vishnevsky, Jasilioniene A., Kotowska I. et al. Barnet Papers in Social Research. University of Oxford, 2015. No. 15-01 (9).
This paper examines fertility and family policies in 15 Central and East European (CEE) countries to establish firstly, whether cohort fertility is likely to further decline, stabilise or increase in the coming decade; and secondly, to provide an overview of family policies in CEE countries, and to assess their impact on the direction of cohort fertility trends. This study takes into account a variety of social, economic and political circumstances in the region. Demographic analysis suggests that cohort fertility in the majority of CEE countries is likely to decline at least among the 1970s birth cohorts. This is because births that were postponed by women born during the 1970s were not being replaced in sufficient numbers for cohort fertility to increase in the foreseeable future, and shares of low parity women (childless and one child) were considerably larger than shares of high parity women among the late 1960s birth cohorts than in older cohorts. This research conceptualises a new family policy typology for CEE countries consisting of the following types: Comprehensive family policy model; pro-natalist policies; temporary male bread-winner model; frequently modified family policies; family policies of low priority for governments; and lack of resources available for family policies. The paper concludes with two main findings: 1) Cohort fertility is likely to decline in the foreseeable future in almost all CEE countries, and 2) The majority of extant family policies in CEE countries suffer from a variety of shortcomings that impede them from generating optimal family welfare and from providing conditions for cohort fertility to increase.
The Family in Value Orientations
Lezhnina Y. P. Russian Education and Society. 2011. Vol. 53. No. 2. P. 78-92.

Russia’s declining birth rate is linked to a delay in a family’s decision to have children and to uncertainty about the place of children in a couple’s relationship. Despite the rise of individualism and the importance of career and self-realization, however, the family retains a very important place in Russian society.

Effects of recent economic crisis have been widely discussed in various scientific and popular literature. But they were not adequately calculated and empirically evaluated. This article presents measurements of the crisis impact on three categories of households, including families of employed and unemployed, families with children and families with pensioners.

Childbearing After Repartnering Among Russians, Russians Migrants and Estonians: Prevalence and Determinants
Churilova E., Zakharov S. V. Working Papers. SSRN, 2017
The collapse of the USSR and structural changes in society gave rise to family and marriage transformations in Russia and other post-Soviet countries of Eastern Europe. Estonia is among the examples of rapid marriage transformation and the spread of cohabitations and extramarital births. At the same time, throughout the post-war era Estonia accepted Russian migrants. Studies show that the adaptation of the Russian population in Estonia proceeds slowly, and that patterns of matrimonial behavior among the Russian migrants and their descendants in Estonia are closer to patterns of ethnic Russians in Russia. In this study, the Generation and Gender Survey data for Russia (2004) and Estonia (2005) were used to analyze the prevalence of first and second childbirths in first and higher-order unions and the determinants of fertility after repartnering among the Russian and Estonian populations in Estonia and Russians in Russia. We consider the impact of partners’ age and parenthood status at the beginning of higher-order unions, as well as social variables (e.g. education, type of settlement and ethnicity).  The results show that the contribution of higher-order unions to total fertility increased significantly in all studied populations. However, first childbirths in high-order unions are rare among both the Russians and the Estonians, second births after repartnering are more widespread among Russians in Russia. Divorces and separations significantly increase the interval between first and second births, but there is no difference in time interval duration between the three considered population groups. The determinants of childbearing among Russians in Russia and Estonia in higher-order unions are very similar: they are the age of women, the type of habitation and the initial nature of the union. The effect of the parenthood status and marriage cohort is individual for each population group: in Russia, if a male partner has no child(ren) from previous relationships, the couple has a higher chance of having a mutual child. The probability of childbearing after repartnering significantly increased in 1990-1999 in Estonia.
Рождаемость и планирование семьи
Захаров С. В., Сакевич В. И. В кн.: Население России 2015: двадцать третий ежегодный демографический доклад. М.: Издательский дом НИУ ВШЭ, 2017. Гл. 3. С. 112-185.
Ценность высшего образования Мнения представителей семей, в которых есть дети, о важности высшего образования. Опрос фонда «Общественное мнение»
Петренко Е. С., Галицкая Е. Г., Шмерлина И. А. Вопросы образования. 2010. № 2. С. 187-206.

Baby bust in the wake of the COVID-19 pandemic? First results from the new STFF data series
Sobotka T., Jasilioniene A., Galarza A. A. et al. . . SocArXiv, 2021
Past evidence on fertility responses to external shocks, including economic recessions and the outbreaks of infectious diseases, show that people often put their childbearing plans on hold in uncertain times. We study the most recent data on monthly birth trends to analyse the initial fertility responses to the outbreak of the COVID-19 pandemic. Our research, based on new Short-Term Fertility Fluctuations (STFF) data series (https://www.humanfertility.org/cgi-bin/stff.php), embedded in the Human Fertility Database (HFD), shows the initial signs of the expected “birth recession”. Monthly number of births in many countries fell sharply between October 2020 and the most recent month observed, often bringing about a clear reversal of the previous trend. Across 17 countries with lower fluctuations in births, the number of births fell on average by 5.1% in November 2020, 6.5% in December 2020 and 8.9% in January 2021 when compared with the same month of the previous year. Spain sustained the sharpest drop in the number of births among the analysed countries, with the number of births plummeting by 20% in December 2020 and January 2021. The combined effect of rising mortality and falling birth rates is disrupting the balance of births and deaths in many countries, pushing natural population increase to record low levels in 2020 and 2021.
Russia's Population until 2025
Denisenko M. B. In bk.: Russia 2025: Scenarios for the Future. L.: Palgrave Macmillan, 2013. Ch. 4. P. 86-105.