The Structure of Europeans’ Views of Democracy 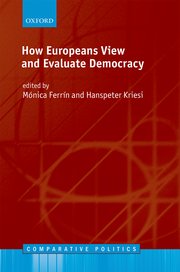 The article introduces the concept of the "democratization trap." Democratization can be considered as a process with an autonomous logic of development that cannot be fully g rasped by standard "actor-oriented" and "structural" approaches. The autonomous logic of democratization is formalized via a game-theoretical model with "politicians" and "voters" as players. They interact under conditions that are inherent to all young democracies. The model predicts that certain types of linkages between politicians and voters emerge endogenously; the emphasis is on the observation that these types of linkages are defective in the context of "liberal democracy." Moreover, these defective linkages may arise even if elections are free, honest and competitive. Empirical evidence underpins the main predictions of the model. The concept of the "democratization trap" may have several interesting implications which call for further research, from factors that cause democratic transitions to "freeze up" to contradictions between "liberal" and "democratic" components of liberal democracy.

The question of correlation between liberalism and democracy is  a key  one for contemporary political theory and the practice of public governance. The significance of the theme proposed is stipulated by the dynamic development of political actuality in the countries of Western Europe and North America, which means the emergence and efficient existence of liberal democracy.  The comprehension of theoretical premises and practical conditions for the harmonic development of the originally contradictory concepts (mean, universal liberal values  and basic democracy principles) needs to be elaborated for political practice improvement.

The article traces the history of the social democratic movement in the 20th century around the Europe in order to scrutinize its modern-day problems, particularly of electoral decline. Authors show how social democrats ceased to be leaders of the mass labor movement for the general democratization, welfare state and European integration. They conclude that today’s social democratic parties are comparatively loose organizations  with vague programs and limited ambition for social change.

This chapter introduces the basic model of liberal democracy, which constitutes the focus of the entire study, as well as the two models going beyond this basic model—social and direct democracy. In addition, it situates our approach with respect to the rich literature on the study of democratic support, it provides an introduction to our explanatory strategy, and it provides an overview of the content of the volume. The discussion of our approach introduces the basic distinctions between views, evaluations, and legitimacy beliefs, while the presentation of the explanatory strategies first distinguishes between individual and context characteristics, and then focuses on political and economic (as opposed to cultural) characteristics of the context.

Конституционно-правовое понимание демократии: к основам постсоветской теории права
Масленникова С. В. В кн.: . Гл. 3. С. 72-92.
The article describes the social bases of power in the ideas of popular sovereignty, popular representation, the theory of elites and rational behavior of actors involved in the political process. It is noted that depending on the idea of a social base of power can be considered the people, the Parliament or the representatives of the people, the political elite, the laws of political behavior. The philosophy of the social bases of power at different stages of social development promoted Rousseau, Schmitt, Jefferson, Juvenal, Zola etc. The ideological foundations was embodied in the Constitution and state practice for centuries. Currently there is a crisis of democracy, including elements such as Parliament, parties, elections and direct control. The paradigm of democracy prevalent in many States, no matter whether secured national sovereignty in the Constitution or not. It is important, based on what, based on what circumstances, conditions and traditions, has formed its understanding to date, what is the approach to the interpretation of the social bases of power distributed in the social environment of a state