Russia has been reforming its political, economic and social sectors for more than 20 years now. During this time the social structure has changed significantly as have the institutes and the entire system of social relations. Russian people have changed as well – researchers frequently record processes that show dynamics of their consciousness, norms and values specifics; however, researchers often emphasize that the changes appear to be ambiguous and complicated. Russian youth is of special interest in this respect. Young Russians were and still are going through secondary socialization in conditions when their identities, norms and values are shaped during the period of ongoing country-wide transformations that overlap with the large-scale worldwide processes of globalization, international division of labor, emersion of new kinds of inequality and new risks. Besides, the country’s future will be largely determined by norms and values of today’s Russian youth, as they will set possible vectors of development that may be accepted by the population in the medium and long run.

Similarly, Western researchers have long been focusing their attention on the youth group, their changing values and attitudes as well as comparison of this group with the older generation to determine the cultural dynamics vector or explore it as an actor, for which manifestation of deviant practices is most typical. Problems of youth values and attitudes are obviously relevant to the BRIC countries as they raise the question of what transformations can be initiated by the change of values shared by the new generation, whose socialization was influenced by fundamentally different conditions vs. the older generation of their population. In this context there is no surprise that researchers from BRIC perform comparisons of different generations within the country’s population, including cross-country comparisons of generations’ value systems.

Analysis of youth identities, norms and values is an important research objective for Russia. To assess the country’s cultural dynamics vector and forecast development of modernization processes, it is essential to identify which changes in the young people reflect the processes typical for the cultural dynamics of the entire population and which relate only to young Russians; understand which changes bring the Russian youth close to the youth in other BRIC countries and which changes separate them. This chapter is trying to find the answers to these questions. 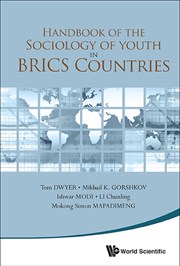