Chapter 3 deals with the interaction of language and culture that make two facets of Russian English. Section 1, prepared by Zoya Proshina, provides for the comparison between Russian and English. It describes typological characteristics of Russian and English and their common features and distinctions on different language levels, which may have an impact on the features of Russian English. It is known that language contact between English and an indigenous language is usually a two-way process that leads to nativization of English and Englishization of the indigenous language. Englishization of Russian is elucidated by Alexandra Rivlina and Zoya Proshina in section 2. In section 3, Alexandra Rivlina elabo-rates on English and Russian code-mixing and code-switching. She argues that English-Russian hybridization is increasingly widely used in Russian discourse, especially in the form of word play based on code-mixing. Section 4, by Svetlana Ter-Minasova, focuses the discussion on the contemporary changes in Russian mentality and culture caused by the sudden ‘intrusion’ of English into the Russian language, culture, and lifestyle. The impact of English culture via the English language in its various forms (mass media, advertisement, the avalanche borrowing, etc.) on the Russian culture can be seen in different domains: in the business domain, change of attitudes to patronymics; in academic papers, change of style, a great damage inflicted on the Russian linguacultural picture of the world by poor translations from English into Russian. Section 5, by Victor Kabakchi and Elena Beloglazova, characterizes the way English adjusts to expressing Russian culture-loaded concepts. 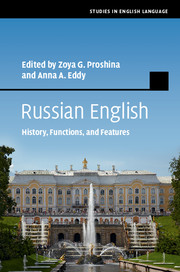 Englishization of Russian and bilingual lexical variation
Rivlina A. A. Linguistics. WP BRP. НИУ ВШЭ, 2013. No. WP BRP 05/LNG/2013.
This paper aims to show that due to the increase in mass English-Russian bilingualism the notion of lexical variation generated by Englishization should not be restricted to the traditionally studied opposition of English loanwords vs. their host language equivalents, but should be broadened to embrace a wider range of Englishized lexical units. This will include borrowings from English, recurrent English-Russian code-switches, and a number of intermediate phenomena between them. This paper argues that there is a tendency for different Englishized lexis expressing the same denotational semantics not to be ousted in the process of assimilation, but rather to be settled in a series of variants which index different contextual information and render different socio-pragmatic connotations, especially in written discourse in various domains. Bilingual lexical variation, one of the most visible trends in modern Russian, testifies to the increase in its Englishization, facilitates the process of further Englishization, and contributes to the formation of Russian English.
Language Contact: The State of the Art
2014.

The 2014 Symposium 'Language Contact: The State of the Art' took place in Helsinki, August 28-30

How to study multilingualism of the past: Investigating traditional contact situations in Daghestan
Dobrushina N. Journal of Sociolinguistics. 2013. Vol. 17. No. 3. P. 376-393.

Reconstructing contact situations for an unwritten language is a challenging task, as the sociolinguistic past of such speech communities is very rarely documented. The paper describes research in which a method of retrospective family interviews is applied, where respondents’ recollections about recent multilingual past and, in particular, about the language repertoires of their elder relatives, are converted into quantitative data. It is a case study of three neighboring villages in the mountains of Daghestan, each of which has its own first language. It is shown that the multilingual pattern in the cluster is now shifting from the knowledge of neighbor languages towards Russian – an external lingua franca which is not native to any of the communicants.

Multilingualism in Daghestan
Kozhukhar A. A., Barylnikova D. Linguistics. WP BRP. НИУ ВШЭ, 2013. No. 04/LIN/2013.
This study deals with the phenomenon of multilingualism so common in the areas of a high level of language density. The research was carried out in Daghestan in one of the many spots where languages from several different groups of the East Caucasian family are spoken. Through retrospective interviews (Dobrushina 2013), we investigate whether the ability to speak the language of the neighbors has changed over the last one hundred years.
Rev. of Miller, D. G. (2012). External influences on English: From its beginnings to the Renaissance. Oxford: Oxford University Press.
Volkonskaya M. A. Journal of Language and Education. 2015. Vol. 1. No. 4. P. 81-84.

The paper reviews D.G. Miller's recent book, "External influences on English: From its beginnings to the Renaissance".

Language contacts have been extensively studied linguistically and sociolinguistically. This paper argues that cross-cultural analysis of language transfer can also prove useful in contact linguistics. One of the latest borrowings from English into Russian, the semantic calque vyzov vyzovy (‘challenge/challenges’) used often in the cliche´ ugrozy i vyzovy (‘threats and hallenges’), makes certain shifts in the Russian world view traceable. Challenge, a key word in English, is untranslatable into Russian and the trite Russian translation equivalent for challenge – problema (‘problem’) reveals important differences between the two cultures: the Anglophone (especially, American) linguaculture, whose dominant values are individual success and activity, competitiveness, positive thinking, sense of adventure, etc., perceives difficulties as ‘‘stimuli’’ and conceptualizes them in terms of challenges; contrary to this, the Russian linguaculture, which is, if compared with the Western cultures, ‘‘being-oriented,’’ ‘‘relationship-oriented,’’ ‘passive’’ and ‘‘pessimistic,’’ encourages the discussion of difficulties in terms of problems. The borrowing of the concept challenge by extending the meaning of vyzov registers a shift of the Russian value system in the direction of increased agentivity, assertiveness, positivism, competitiveness, etc. Such borrowings are ‘‘challenges’’ rather than ‘‘threats’’ to the Russian language and culture and they call for a more in-depth linguacultural analysis of English–Russian interactions.

In Udi (Northeast Caucasian, Lezgic), the prenominal relative clause may be preceded by a genitive phrase referring, at first glance, to some of its arguments. It is proposed that this construction results from a borrowing from Azerbaijani, which, however, underwent reanalysis: the genitive phrase behaves as the possessor of the matrix nominal phrase and the relative clause appears to specify the possessive relation. The Udi data are further compared with data from a few other languages that display similar constructions.

This fascinating book offers a comprehensive exploration of Russian English as a World English variety. The authors introduce readers to the history of language contact between Russian and English, which has resulted in the Russianization of English and Englishization of Russian. They also discuss the functions of English as a lingua franca in the domains of politics, business and tourism, as a tool in youth subcultures, education and scholarship, and as a creative means in mass media, advertisement, music and literature. The book engages with the major role of English in expressing a speaker's cultural and personal identity within the global community. This accessible and engaging work presents a great number of concepts within the field of Russian linguistics, as well as introducing readers to the outstanding Russian scholars in the field. Essential reading for students and researchers across a wide range of related fields.