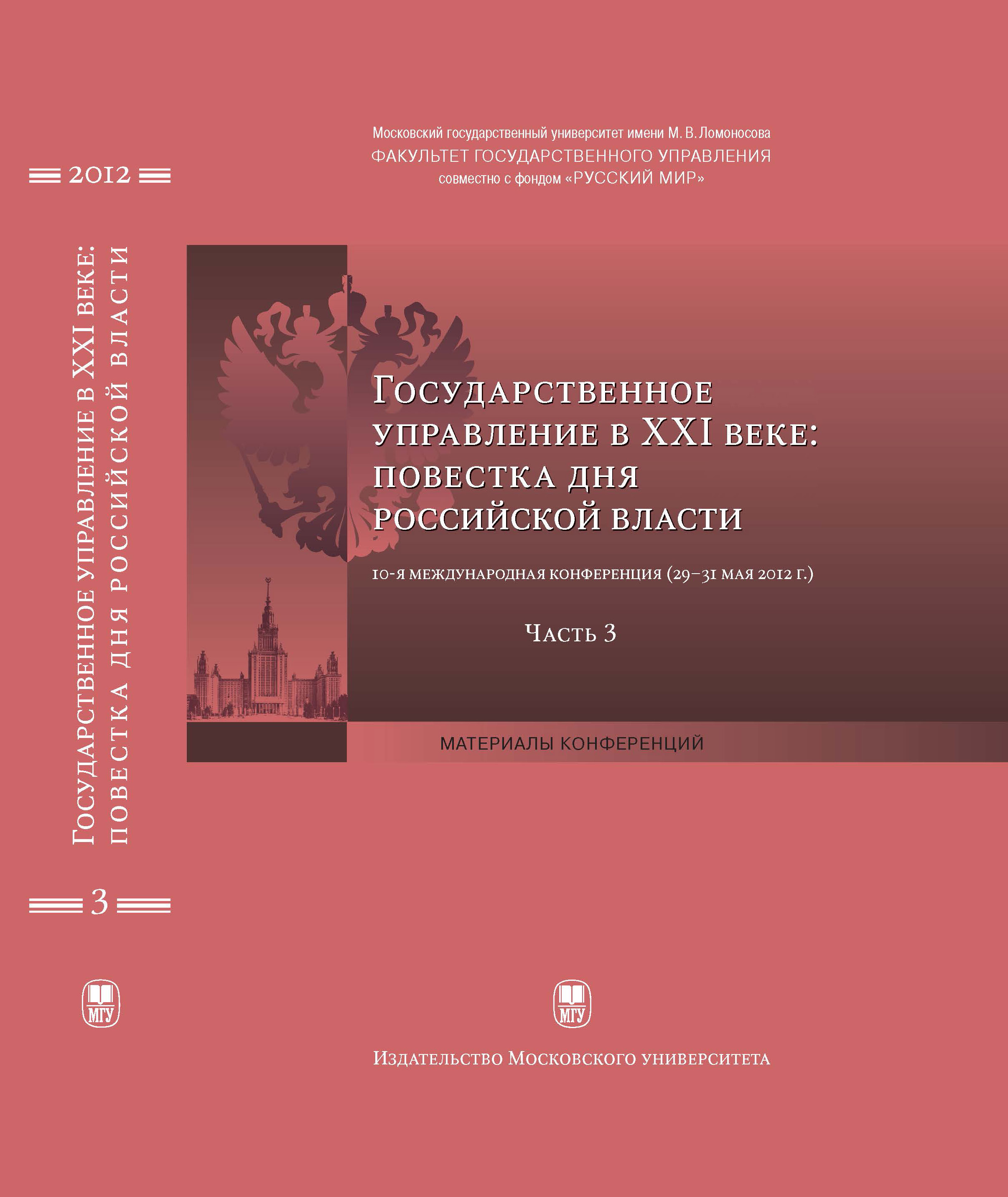 The book of articles based on NISPA Annual conference final selected reports (Macedonia, OHrid, May 23-26).

Динамика промышленного производства и экономический цикл в СССР и России, 1861–2012
Смирнов С. В. Количественный анализ в экономике. WP2. Высшая школа экономики, 2012. № WP2/2012/04.
The trajectory of the industrial output of the Russian empire – the USSR – the Russian Federation for more than 150 years has been carefully investigated through official statistics as well as dozens of alternative estimates made by Russian and foreign experts. Calculation of the aggregated “consensus” industrial production index has made it possible to date the cyclical turning points and to measure the depth and length of the main industrial recessions for the last century and a half. The most important causes of all these recessions are described. The cyclical volatility of Russian industry is compared with the cyclical volatility of American industry.
Глава 1 Государственное управление и исполнительная власть
Уманская В. П. В кн.: Государственное управление и государственная служба в современной России. М.: НОРМА, ИНФРА-М, 2020. Гл. 1. С. 7-19.

Вопрос о труде и смысле жизни
Сидорина Т. Ю. Вопросы философии. 2013. № 11. С. 3-14.
Административный акт в системе форм российского права (сравнительно-исторический аспект)
Михеева И. В. В кн.: Система права в Российской Федерации: проблемы теории и практики : Сборник научных статей. Материалы V ежегодной международной конференции, 19-22 апреля 2010 г.. М.: РАП, 2011. С. 412-422.
The article is devoted to the concept of "administrative act" in the context of public administration. Different approaches to the definition of the acts of state administration are considered in history and the present of the Russian state.
Firm Value in Crisis: Effects of Firm-Level Transparency and Country-Level Institutions
Enikolopov R., Petrova M., Stepanov S. CEFIR / NES Working Paper. Центр экономических и финансовых исследований и разработок в российской экономической школе, Российская экономическая школа, 2012. No. 184.
Recent empirical research suggests that country-level and firm-level governance institutions are substitutes with respect to their effect on firm value. In this paper we demonstrate that these institutions may become complements once we look at the decline in firm’s value during a crisis. Specifically, we find that the decline in companies’ valuation during the financial crisis of 2007-2009 was more sensitive to firm-level transparency in countries with stronger investor protection. We propose a theoretical model that reconciles our findings with the results in the literature. In our model, during "normal times" strong firm-level governance is crucial to attract outside financing in countries with weak investor protection, but is less important in countries with good investor protection. During the crisis, however, corporate governance becomes important even in regimes with strong investor protection, and, as a result, relative importance of firm-level governance increases in countries with good investor protection.