Russia: Ranking Fever: Do We Know the Remedy? 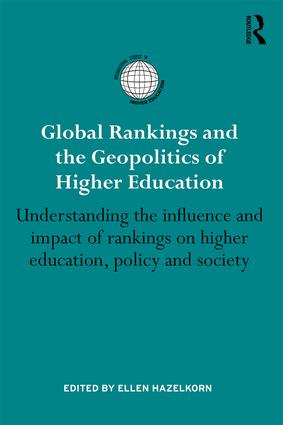 Since the first works on Higher Education Administration in the 1970s no comprehensive work in terms of purpose and scope of Higher Education has been published. There have been important changes in people’s aspirations vis-à-vis higher education globally. In parallel, the higher education systems, worldwide, have been undergoing constant transformation in response to these aspirations. From governments, employers and prospective students and their parents, the stakeholders in higher education system are now extremely varied paying close attention to the various aspects of higher education - from infrastructure, on-campus safety and security to administration, faculty and curricula. The present series attempts to take into account the issues of importance to all the stakeholders. Hence the series not only pays attention to the purpose and outcomes of higher education but also the economics surrounding higher education vis a vis marketization. The nitty gritty of running and maintaining a university infrastructure, impact of globalization and internationalization on delivery and demand of higher education, the commoditization of research, and changing paradigms of teaching and learning fall within the purview of the series. The increasing competition from other entities to provide degrees, certificates or other forms of credentials makes it important to have a work that brings all of the elements together to see how they actually interact and inter-relate from a systems perspective. The present series attempts to comprehensively attend to these issues and provide a complete reference resource to all those involved and interested in setting up of a Higher Education institution and its administration.

The main reason the so-called "crisis of education" covers not only the rap-id changes in the system of knowledge and technology, but also the changes in the labor market, the prevalence of atypical employment. As a result, the univer-sity, by definition, can not train a specialist, fully satisfying the requirements of the employer. For example, the direction of "Advertising and public relations" proposes measures to resolve the existing contradictions.

The Education System in the Russian Federation: Education Brief 2012
Nikolaev D., Chugunov D. Washington: The World Bank, 2012.
This Education brief is intended for non-Russian researchers willing to get familiar with Russian education system and more generally for all those involved in education and education policy. It does not represent exhaustive information on Russian education system and all problems and challenges existing there, but provide a snapshot briefly describing its main features. Education brief - 2012 retains its main special feature which is the combination of statistical data and qualitative information to describe the organization and functioning of education system in the Russian Federation. The report provides an up-to-date array of indicators to measure the current state of education in the country. The indicators provide information on the human and financial resources invested in education, on how education and learning subsystems operate and evolve. The analytical parts of the report examine key problems and challenges faced by education system administrators and policymakers in education sphere.
Основы ТРИЗ, системного анализа и управления проектами как необходимые компоненты инженерной культуры
Плаксин М. А. В кн.: Пропедевтика инженерной культуры обучающихся в условиях модернизации образования: коллективная монография. М.: ООО "Лаборатория знаний", 2015. С. 152-163.

The paper discusses the development of the organizational practices in a Russian university under the influence of the environment. In the latter, the key factors are legislation and regulations of the Ministry of education and science. This influence is ambiguous and varies in different aspects, so to understand combined effect one needs detailed analysis using purposebuilt tools. The paper introduces such tool based on ideas of business model canvas by Alexander Osterwalder and Yves Pigneur and organizational design theory by Henry Mintzberg. This instrument makes it possible to conduct a system analysis of the organizational design of the university, the integrity of this design and its fit to the environmental conditions. In particular, this analysis shows, how the system of restrictions and stimuli, created by the Ministry of education and science leads to the degradation of education quality in a classic university

Values, Efficacy And Trust As Determinants Of Innovative Organizational Behaviour In Russia
Schmidt P., Lebedeva N. Psychology. PSY. Высшая школа экономики, 2014. No. WP BRP 21/PSY/2014.
This study examines the relationship between values, efficacy, trust and innovative organizational behaviour in Russia. We analyse the direct and indirect effect of gender, age and education on innovative behaviour via values, trust and efficacy. For the measurement of values we employed a new revised value instrument with 19 values. We found that Openness to Change values had a significant positive effect and Conservation values a significant negative effect on innovative behaviour in organizations; efficacy and trust had a significant positive effect. Moreover, the effect of values is moderated by the level of efficacy. Gender, age and education directly influence innovative behaviour and determine such behaviour via values, efficacy and trust.
Does Lengthening the School Day Increases School Value-Added? Evidence from a Mid-Income Country
Cabrera-Hernandez F. J. Journal of Development Studies. 2019. Vol. 56. No. 2. P. 314-335.

Many mid-income countries face a significant and challenging problem of low educational achievement. This research looks at a Full-Time Primary Schools Programme implemented in Mexico, to work out if extending the time pupils spend at school can enhance skills in language and mathematics. The results of matching plus difference-in-differences point to a positive impact on schools value-added. The effects are concentrated among poorer schools, with gains after policy adoption of 0.11 standard deviations (SD) in both subjects. However, quantile regressions show that the lowest-performance schools are not benefiting from longer school days, posing questions on programme effectiveness to improve the achievement of those who are more in need. Analysis of causal channels suggests that gains reported by the programme do not come from changes in the composition of teachers and pupils in treated schools, and that richer schools are more prone to devote the extra-time of instruction to non-core subjects, notably sports and arts.