The Dialectic of the Other: Political Philosophy and Practice in the Late Neoplatonist Communities

The paper is devoted to investigation of the series of extremely interesting cases observed in the life and in the textual practice of the last Neoplatonist communities of the 3rd – 6th centuries can be interpreted by an intent researcher as the set of modes by which the intellectual tradition of Antiquity and, more important, the Hellenistic intellectuals themselves survived in the environment which increasingly became more and more alien to them. Being observed from a specific, “inner-Platonic” point of view, these modes can be described as the kinds of projection of the Platonic dialectic of “the one” and “the other” (presented in Plato’s dialogue Parmenides) on social and political plans of reality. Irrespective of the specifically Platonic approach, these modes can be observed in the general perspective of the crisis suffered by the traditional Hellenistic types of communities and the Hellenistic intellectual communities particularly. 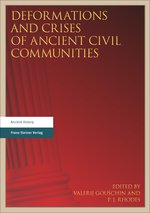 The paper discusses the development of metaphysics understood as a philosophical discipline or science. The author would like to propose that the last period of Greek philosophy, that going from about the 3rd to the 6th centuries A.D., made new and interesting contributions to metaphysics as a philosophical discipline, indeed made metaphysics into a metaphysical science, while also bringing out the limits of such a science. The paper has four parts. In part I, D. O’Meara introduces the way in which the great Aristotelian commentator of the early 3rd century, Alexander of Aphrodisias, in interpreting Aristotle's metaphysical treatise, sought to find in it a metaphysical science. In part II of the paper, he attempts to show how the Neoplatonist philosopher of the early 5th century Syrianus, not only adopted Alexander's reading of Aristotle, but was also inspired by it in finding this same metaphysical science already in Plato. In part III of the paper, the author will show how all of this resulted in a masterpiece of metaphysics, the Elements of Theology written by Syrianus' pupil Proclus. Finally, in part IV, he would like to refer to what is perhaps the last great metaphysical work of Greek philosophy, the Treatise on First Principles written by Damascius, a work in which the limits of metaphysical science are explored with extraordinary subtlety and insistence. In adapting Alexander's formalization of Aristotelian metaphysical science to Platonism, Syrianus knew that such a science was a means towards, not the equivalent of, knowledge of the transcendent. Proclus knew it too, even if his Elements of Theology, in presenting metaphysical science with such systematic beauty, could give the impression of being a definitive statement. And, lest we have any illusions about the adequacy of our metaphysical science, Damascius could cure us of these, opening our minds to what lay behind, or above, our own metaphysical efforts.