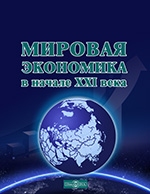 Мировая экономика – площадка для решения водных проблем
Лихачева А. Б. В кн.: XII Международная научная конференция по проблемам развития экономики и общества. В четырех книгах. Книга 2. Кн. 2. М.: Издательский дом НИУ ВШЭ, 2012. С. 95-105.
Глобальное экономическое регулирование: учебник
Зуев В. Н., Островская Е. Я., Мешкова Т. А. и др. М.: Магистр, 2013.
G-20 в системе международных институтов
Братерский М. В. В кн.: XIII Международная научная конференция по проблемам развития экономики и общества. В 4 кн. Кн. 4.. Кн. 4. М.: Издательский дом НИУ ВШЭ, 2012. С. 249-259.
Китай в период мирового кризиса: бенефициар, жертва или виновник?
Мозиас П. М. Вопросы экономики. 2010. № 9. С. 93-114.
Совет по финансовой стабильности – новый международный институт внедрения «мягкого» регулирования в условиях «жесткого» кризиса
Заварыкина К. О., Зуев В. Н., Кучерявый П. В. Вестник международных организаций: образование, наука, новая экономика. 2010. № 2. С. 72-82.
Государственное управление в XXI веке: традиции и инновации. 9-я Международная конференция (25-27 мая 2011 г.)
Ч. 3. М.: Издательство Московского университета, 2011.
Non-Keynesian savings of Russians
Timofeev D. V. Basic research program. WP BRP. National Research University Higher School of Economics, 2015. No. 20.
Russian recession of 2014/2015 began with ruble run and rise of inflation. It is just the opposite of the western-type deflationary slump combined with money hoarding. Does it mean that Russians need different micro-model to describe saving and consumption behavior? This study show that work-horse log-linearized rational SDF with CRRA utility still provides good explanation for Russian consumers. It explains dollarization, domestic equity market avoidance, preference for real estate, and chiefly - wary attitude towards rubles. Expectations derived from the past and interactive preferences lock macro economy in the state of steadfast distrust in ruble, prone to inflation. For a while one should not expect Keynesian-type deflationary cycle in Russia. The next recession is likely to be inflationary, requiring monetary tightening. This reasoning is generalized for other emerging countries. Free-floating currency and inflation targeting do not mean easy way ahead for the country with recent negative inflation experience.
Predicting US Recessions: Does a Wishful Bias Exist?
Smirnov S. V. Economics. EC. Высшая школа экономики, 2014. No. 77.
There is evidence in the economic literature that near cyclical peaks an optimistic bias exists in private expert forecasts of real GDP growth rates. Other evidence concerns differences in the accuracy of GDP forecasts made during expansions and those made during contractions. It has also been hypothesized that a wishful bias may hamper the ability to recognize the beginning of a recession in real-time. We tested consensus forecasts of quarterly GDP growth rates taken from SPFs conducted by PhilFed and found that they may be seen as unbiased only for time horizons j=0,1,2; for greater horizons they are over-optimistic. This over-optimism may also be observed for (j=1, 2) for forecasts made at peaks (at these moments the consensus usually points only to a slowdown of the economy but not to a contraction). Lastly, over-optimism may be observed for nowcasts (j=0) during cyclical contractions, including the first two quarters of a recession (in these cases the reality is usually worse than expected). Taken together, all these facts mean that some aversion to predicting US recessions exists. There are two possible reasons for this: a) experts rely too heavily on extrapolations (then changes in medium-long tendencies would be missed in real time); b) there is a wishful bias in forecasts against predicting recessions (this reluctance may be rooted in psychological factors). We give some arguments in favor of the thesis that the second factor is more important.
Компании интернет-индустрии как участники мировых политических процессов
Зиновьева Е. С. В кн.: Негосударственные участники мировой политики. М.: Аспект Пресс, 2013. С. 72-80.
Россия и Договор Энергетической хартии
Белый А. В. ЭКО. 2010. № 6. С. 97-114.