The motivational antecedents of perseverance

Perseverance has a rather long history of study within achievement motivation literature (McClelland, 1961, 1987; Heckhausen, 1980, 1989) and recently in positive psychology as one of the important  character strengths (Peterson & Seligman, 2004). Peterson & Seligman defined it as voluntary continuation of action or behavior that is goal directed and typically in the face of difficulty or obstacles.

Recently a new similar construct appeared in psychology, namely grit which was defined as perseverance and passion for long-term goals (Duckworth et al., 2007).  Grit was found to be a predictor of different types of educational attainment among variety of samples. Our own studies confirmed this relation, grit accounted for 8% of the variance in academic achievement of university students (Gordeeva et al., 2011; Gordeeva & Sychev, 2012). The role of perseverance or grit couldn’t be overestimated as it’s a source of achievement in every field.  However, it remains unclear what lays behind grit or persistence, what moves a person to display grit? The aim of present study is to investigate the motivational  antecedents of grit.

In accordance with structural-dynamic model of achievement motivation (Gordeeva, 2006, 2011) it was hypothesized that three sources of perseverance  could be distinguished: 1) a module standing from the  profile of intrinsic and extrinsic motivation, 2) self-regulatory module responsible for effective goal attainment, including self-control and purposefulness, and 3) cognitive components module including positive expectations, optimistic attributional style, and self-efficacy.

However, the results show that high perseverance is not the only way to academic success. The second path to achieve academic success  is through high and predominant intrinsic motivation accompanied by moderate level of perseverance. However this second pattern  was twice more rare in our overall sample (19% compared to 40% to the first pattern). The theoretical advancements and implications for future research will be discussed. 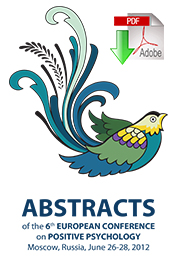