Our results suggest a more nuanced view of Russian privatization than that offered by either its critics or its defenders. We confirm earlier findings that the average impact on productivity of privatization to domestic owners is around -3 to -5 percent, though some regions show productivity gains similar to those in Central Europe (an increase of 10 to 20 percent). The regional variation is strongly positively associated with the size of the regional bureaucracy. Notwithstanding the average negative effect, our updated results through 2005 (the most recent year for which comparable data are available) show a pronounced change after 2002 as the productivity effects of Russian privatization have begun to approach those seen elsewhere much earlier. Privatization became most effective west of the Urals, in areas with greater market access. Initially an outlier, by 2005 Russia appeared to be becoming more of a “normal country,” at least in the narrow sense of the impact of private ownership on firm productivity.

Language: English
Keywords: regional bureaucracyprivatizationproductivity
Publication based on the results of: Institutions and Economic Development: the Role of Bureaucracy and Experiments as a Method to Analyze and Evaluate Reforms(2011) 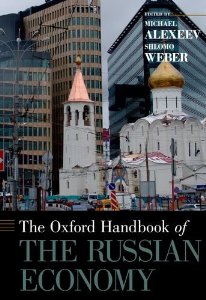 The Oxford Handbook of the Russian Economy
Oxford: Oxford University Press, 2013.
Similar publications
Основные тенденции развития российской экономики
Кудров В. М. В кн.: Россия в многообразии цивилизаций. М.: Весь мир, 2011. Гл. 23. С. 553-577.
Explaining the Productivity Advantages of Manufacturing Firms in Russian Urban Agglomerations
Gonchar K. R., Ratnikova T. A. Economics. EC. Высшая школа экономики, 2012. No. 22.
This paper empirically analyzes the agglomeration-related productivity premium at the enterprise level of the manufacturing industry in Russia. A settlement is counted as part of an urban agglomeration in two cases: that of a large, central city and that of a town located within 50 kilometers of the central city. Data obtained from a 2009 manufacturing enterprise survey are used, along with linked data on hosting regions and cities. We employ a multilevel model, which allows us to consider firm, urban and regional heterogeneity and test two possible explanations of the productivity advantages of firms in urban agglomerations – own-sector and all economic activity concentration in the city and the surrounding region. The results suggest that Russian plants in urban agglomerations enjoy 17-21% higher labor productivity. This gain arises as a result of urbanization and external scale economy – the agglomeration of firms belonging to different industries at both the urban and the regional levels of analysis. We also found that productivity gained from urban agglomeration is the highest in towns with populations of 100,000 to 250,000 people. Localization and clustering – the own-sector concentration of plants in the city – is not associated with higher labor productivity. The structure and size of the surrounding economy always matter: in contrast to urban clusters, regional own-industry clustering satisfactorily explains the productivity premium, suggesting that efficient clustering requires a scale economy larger than only a city. The region’s trade openness almost doubles the productivity premium of a firm in an urban agglomeration. All of our results are robust to changes in estimation technique, sample structure and choice of spatial objects.
Партнерство государства и частного бизнеса: национализация и приватизация
Соловьев М. М., Кошкин Л. И. Проблемы теории и практики управления. 2011. № 3. С. 19-30.

The authors explore mechanisms, which help practice partnership relations between the state and private business, and show that partnership projects are part of privatization and nationalization variants.

The book presents a broad interdisciplinary view comcerning different aspects of civil service reforms in several countries, including Russia, in the context of transformation of role of state and character of its relations with civil society, what is taking place now in the leading coutries of the world. The main historical concepts of bureaucracy and contemporary searches  new (post-Weberian) model of it are considered In the first - theoretical - part of book. The second part is devoted to inter-countries' comparative analysis of history and modern condition of civil service in Creat Britain, USA, Canada, France, Germany. The final section in each countries' paragraph is "The lessons for Russia". The subject of the third part is the Russian bureaucracy in historical and contemporary aspects. The American, English, Canadian, Rfzakh and Russian codes of civil servants' conduct applied to the monograth.

Оплата по результату и производительность
Лазеар Э. В кн.: Контракты в академическом мире. М.: Издательский дом НИУ ВШЭ, 2011. С. 348-389.
When high growth is not enough: Rethinking Russia’s pre-crisis economic performance
Voskoboynikov I., Solanko L. BOFIT Online. DP. Bank of Finland Institute for Economies in Transition, 2014. No. 6.
Based on newly available data, we argue that multifactor productivity increases over the period 1995–2008 generated only about a half of Russia’s GDP growth, a smaller increase than most previous estimates. Further, growth in multifactor productivity seems to have contributed to a smaller share of GDP growth in 2003–2008 than in the first seven years of our observation period. These results imply that increases in capital inputs, and consequently investments in fixed capital, are more important than previously thought for Russia’s economic growth. Detailed analysis of industry-level data reveals two drivers of economic growth in the period: the extended oil & gas sector and high-skill-intensive services. Our analysis indicates that growth in the extended oil & gas sector reflected increased capital inputs, while growth in high-skill-intensive services seems to be part of catching up with more advanced markets. Neither sector is likely to spur growth in the coming decade.
Does international trade provide incentives for efficient behaviour of Russian manufacturing firms?
Golikova V., Gonchar K. R., Kuznetsov B. Post-Communist Economies. 2012. Vol. 24. No. 2. P. 277-289.

This article studies the relationship between exporting and past productivity at the firm level. Panel data from two surveys of Russian manufacturing firms conducted in 2005 and 2009 are used. We analyse the difference between continuing and new exporters, and study how drivers to exporting differ if firms export to CIS or high-wage advanced countries. We find empirical evidence for the self-selection hypothesis: both continuing and new exporters are more productive and larger than non-exporters and export quitters. Path dependence in the nature of foreign trade ceased to exist: serving the markets of the former Soviet Union requires the same productivity advantage as exporting to the developed countries.

This chaper refers to the problem of low productivity and weak competitive stand of plants located in small and particulalry small specialized towns as compared to firms in bigger and more diversified locations. The findingds imply that the urban size and density of economic space, as well as its excessive sectoral specialization significantly reduce the firm competitiveness. Yet, the sectoral structure matters: textile and garmet plants in small towms are most vulnerable. Minimal diversification of economic structure and sufficient scale economy at the plant level allow to reduce the negative effects of the urban size.

Polish model of system transformation and its flexible approach to privatization of state-owned enterprises appeared to be successful. While the vast majority of East European countries as well as Russia suffered a GDP contraction, Poland goes on ahead, though at a slower pace. The article analyses concepts and mechanisms of privatization in Poland, reveals its strong points and opportunities which may provide Russian decision-makers with a necessary insight to develop strategies under Russian reality.