Contemporary otkhodnichestvo is a type of labour migration which is distinguished by its temporary and returnable nature. An adult able-bodied family member temporarily leaves home to offer proactively his or her services or seek employment in other regions (areas). Nowadays, otkhodniks come mostly from small towns or rural areas to offer their services or seek jobs in major cities – regional centers and capitals, in the industrially developed areas of the country.

Certain features distinguish a classical otkhodnik from other types of labour migrants (rotation workers, shabashniks (jobbers), cross-border migrants, etc.). Generally, otkhodninks work far from home, from the place of their permanent residence; their work is of a seasonal (recurring) nature; they are self-starters and act independently; they are driven by the desire to improve their material well-being; and they have no intention to relocate their families. The above features make contemporary otkhodniks similar to typical otkhodniks of the 18th - early 20th centuries. That's why we consider that otkhodnichestvo is a sustenance pattern similar to the one which existed in Russia up to the second decade of the Soviet era.

Currently, the classical otkhodnik emerges primarily from the north of European Russia and the Urals. Those areas have sufficient natural resources that the population can largely use and independently bring to market. We believe the availability of such resources in places where the otkhodniks live was a major factor which contributed to their emergence as a special type of labour migrants.

As the otkhodniks do not participate in local social life and are practically non-existent for the local economy, they also escape the attention of municipal authorities. Moreover, they are beyond the scope of their interest. Nowhere and in no way do the municipal authorities engage with the otkhodniks; usually, the authorities are not even aware of them. In their activities, municipal bodies, just as government organizations, target primarily or exclusively people receiving income from the budget, i.e. members of the local community represented by pensioners, public-sector employees and those in need of support and custody. In the meantime, economically this is the least active part of any local community, whereas the otkhodniks and local business people are its most active and entrepreneurial part. However, neither the municipal, nor the government authorities interact with them or consider them as targets for political actions. This category of really active population seems not to exist within the competence of the authorities. In the existing type of relations with the public authorities, the phenomenon of otkhodniks seems to demonstrate the current stage of engagement between the state and its subjects which is traditional for Russia: avoid control by fleeing to the outskirts of the empire. Nowadays, its flight to the shadow niches of the economy which escaped the attention of the authorities. 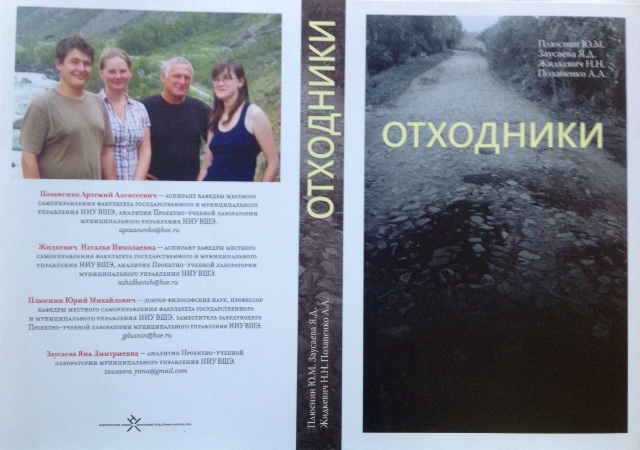