Human reasoning uses to distinguish things that do change and things do not. The latter are commonly expressed in the reasoning as objects, which may represent classes or instances, and classes being further divided into concept types and relation types. These became the main issue of knowledge engineering and have been well tractable by computer. The former kind of things, meanwhile, inevitably evokes consideration not only of a ``thing-that-changes'' but also of ``change-of-a-thing'' and thus claims that the change itself be another entity that needs to be comprehended and handled. This special entity, being treated from different perspectives as event, (changeable) state, transformation, process, scenario and the like, remains a controversial philosophical, linguistic and scientific entity and has gained notably less systematic attention by knowledge engineers than non-changing things.   In particular, there is no clarity in how to express the change in knowledge engineering -– as some specific concept or relation type, as a statement, or proposition, in which subject is related to predicate(s), or in another way. There seems to be an agreement among the scientists that time has to be related, explicitly or implicitly, to everything we regard as change -– but the way it should be related, and whether this should be exactly the time or some generic property or condition, is also an issue of debate.   To bring together the researchers who study representation of change in knowledge engineering both in fundamental and applied aspects, a workshop on Modeling States, Events, Processes and Scenarios (MSEPS 2013) was run on 12 January, 2013, in the framework of the 20th International Conference on Conceptual Structures (ICCS 2013) in Mumbai, India. Seven submissions were selected for presentation that cover major approaches to representation of the change and address such diverse domains of knowledge as biology, geology, oceanography, physics, chemistry and also some multidisciplinary contexts.   Concept maps of biological and other transformations were presented by Meena Kharatmal and Nagarjuna Gadiradju. Their approach stems from conceptual graphs of Sowa and represents the vision of change as a particular type of concept or, likely, relation, defined by meaning rather than by formal properties.   The work of Prima Gustiene and Remigijus Gustas follows a congenial approach but develops a different notation for representation of the change based on specified actor dependencies in application to business issues concerning privacy-related data.   Nataly Zhukova, Oksana Smirnova and Dmitry Ignatov explore the structure of oceanographic data in concern of opportunity of their representation by event ontologies and conceptual graphs. Vladimir Anokhin and Biju Longhinos examine another Earth science, geotectonics, and demonstrate that its long-lasting methodological problems urge application of knowledge engineering methods, primarily engineering of knowledge about events and processes. They suggest a draft of application strategy of knowledge engineering in geotectonics and claim for a joint interdisciplinary effort in this direction.   Doji Lokku and Anuradha Alladi introduce a concept of ``purposefulness'' for any human action and suggest a modeling approach based on it in the systems theory context. In this approach, intellectual means for reaching a purpose are regarded either as structure of a system, in which the purpose is achieved, or as a process that takes place in this system. These means are exposed to different concerns of knowledge, which may be either favorable or not to achieving the purpose. The resulting framework perhaps can be described in a conceptual-graph-related way but is also obviously interpretable as a statement-based pattern, more or less resembling the event bush (Pshenichny et al., 2009).   This binds all the aforementioned works with the last two contributions, which represent an approach based on understanding of the change as a succession of events (including at least one event), the latter being expressed as a statement with one subject and finite number of predicates. The method of event bush that materializes this approach, previously applied mostly in the geosciences, is demonstrated here in application to physical modeling by Cyril Pshenichny, Roberto Carniel and Paolo Diviacco and to chemical and experimental issues, by Cyril Pshenichny. The reported results and their discussion form an agenda for future meetings, discussions and publications. This agenda includes, though is not limited to,     - logical tools for processes modeling, - visual notations for dynamic knowledge representation, - graph languages and graph semantics, - semantic science applications, - event-driven reasoning, - ontological modeling of events and time, - process mining, - modeling of events, states, processes and scenarios in particular domains and interdisciplinary contexts.     The workshop has marked the formation of a new sub-discipline in the knowledge engineering, and future effort will be directed to consolidate its conceptual base and transform the existing diversity of approaches to representation of the change into an arsenal of complementary tools sharpened for various spectral regions of tasks in different domains. 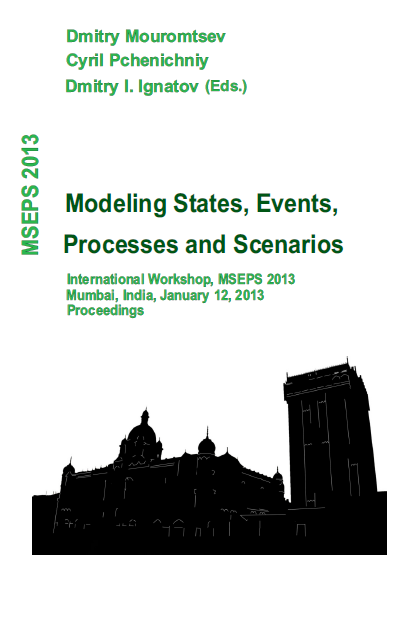