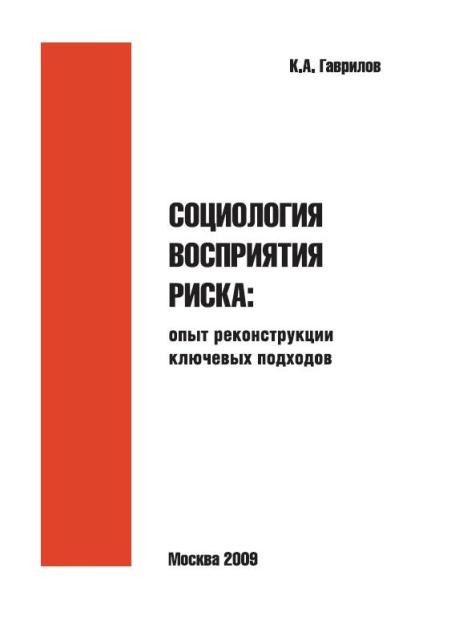 Similar publications
Современный менеджмент: проблемы, гипотезы, исследования : сборник научных трудов
Вып. 1. М.: Издательский дом ГУ-ВШЭ, 2009.
Социологические координаты риска
Edited by: А. В. Мозговая М.: Институт социологии РАН, 2008.
Непосредственные вопросы
Вып. 1. М.: Некоммерческая исследовательская служба «Среда», 2011.
От общества риска к метаморфозам мира: Памяти Ульриха Бека
Гаврилов К. А. Социологический ежегодник. 2016. С. 317-330.
The article describes the contribution of Ulrich Beck (1944–2015) to the sociology of risk. His work «Risk society» had a significant impact on the development of the sociology of risk. For example, the ideas related to the social distribution and placement of risk, specificity of responsibility in the modern era, as well as the changing role of science demonstrate the provocativeness of Beck’s thesis and its significance for the ensuing discussion on these subjects. We also analyze the reflexivity of Beck’s works, his ability to respond to the pressing problems of our time using his own theoretical framework, and his attention to criticism and willingness to transform his arguments. We describe an aspect of the transformation of Beck’s theory that is related to the move from taking into account the adverse effects of risks as a consequence of modernization to the attempts to find positive effects of risks in his works on cosmopolitanism and the metamorphosis of the world.
Профессиональный риск: от реализма к конструктивизму
Соломин М. С. Социологические исследования. 2019. Т. 45. № 5. С. 45-54.

The article is devoted to the conceptualization of the idea of professional or occupational risk in the context of risk sociology. Assuming there is opposing epistemological positions for studying risk in sociology, the author identifies two approaches to the conceptualization of occupational risk: realistic and constructivist. In the first case, professional risk is interpreted as the likelihood of a real threat and possible damage to employees due to the impact on them of harmful production factors of different genesis. In the second case, professional risk is understood as possible decisions (actions) of an actor that are caused, on the one hand, by the framework of the profession’s «life world» (knowledge, skills, experience, norms). On the other hand the actor’s views on the possible costs/benefits are shaped in the course of professional activities. Author demonstrates the research perspectives and limitations of each of these approaches by referring to several examples from empirical sociological research.