French and Soviet Musical Diplomacies in Post-War Austria, 1945-1955 investigates how promoting "national" music and musicians was used as an important asset by France and the USSR in post-Nazi Austria, covering music’s role in international relations at various levels, within changing power frameworks. Bridging international relations, musical sociology, media studies and Cold War history, four incisive chapters examine the crossroads of Soviet, French and Austrian cultural politics and discourse-building, presented in two parts: • Institutions of Musical Diplomacy: Soviet and French Cultural Diplomats in Comparison • Sounds of Music Coming to Austria: Soviet and French Musicians on Tour Using a communication- and media-oriented approach, this study casts new light firstly on the interpretative power of "receiving" publics and secondly the role of cultural transmitters at different levels. This is a valuable study for those specialising in Russian and East European music and music and politics. It will also appeal to cultural historians and all those interested in the intersections between music, international relations, and Cold War history. 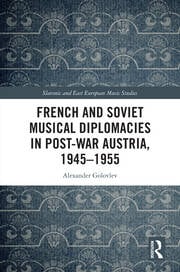