In the post-Soviet period morality became a debatable concept, open to a multitude of expressions and performances. From Russian Orthodoxy to Islam, from shamanism to Protestantism, religions of various kinds provided some of the first possible alternative moral discourses and practices after the end of the Soviet system. This influence remains strong today. Within the Russian context, religion and morality intersect in such social domains as the relief of social suffering, the interpretation of history, the construction and reconstruction of traditions, individual and social health, and business practices. The wide-ranging topics in this ethnographically based volume show the broad religious influence on both discursive and everyday moralities in postsocialist Russia.

The chapter analyses veneration of St Xenia of St Petersburg who is very popular among different groups of contemporary believers in the Russian Orthodox Church. The authors aim to answer why this particular saint became so popular. To answer the question they analyze various types of texts which represent the saint to the believers, including her hagiography and hymnology, on the one hand, and popular literature about her, on the other. The data also includes the ethnographic research of the practices of veneration. The authors argue that popularity of the saint can be (partly) explained by the fact that she is represented by the church and perceived by the believers as a role model for the contemporary believers. She is a saint of irregular believers, and the dynamic channel for Church newcomers. 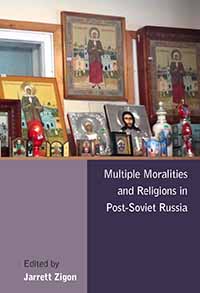