This collective monograph examines the relationship between culture and economic consciousness of Russians and is based on the theoretical and empirical research conducted by the research fellows of the International Scientific-Educational Laboratory of Socio-Cultural Research of the Expert Institute of National Research University “Higher School of Economics”.

The collective monograph is intended for specialists interested in the relationship between culture, economics, and psychology. 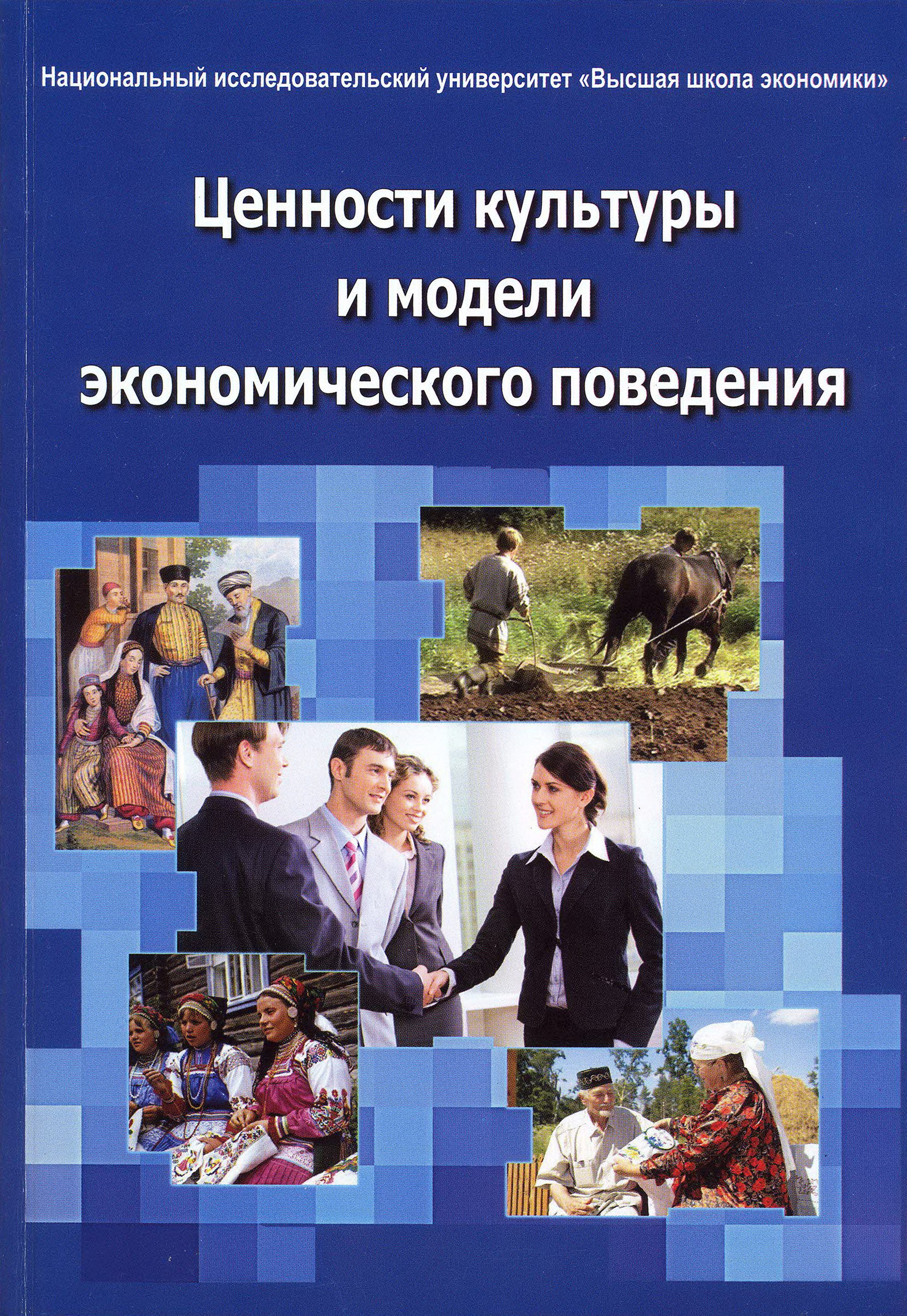 Моральные нормы в экономических моделях: предпочтения, ограничения, правила игры
Автономов Ю. В. Финансы и бизнес. 2010. № 1. С. 6-20.
Does Social Capital Have Economic Payoff in Russia?
Menyashev R., Polishchuk L. Научные доклады Института институциональных исследований. WP10. Высшая школа экономики, 2011. No. 01.
In a number of studies social capital is shown to have substantial positive impact on economic development, institutional performance, and quality of governance. So far no such analyses were available for Russia, and the present paper is intended to fill this gap. We propose a model which differentiates the impact on economic welfare of bridging and bonding forms of social capital. The empirical part of the study is based on 2007 survey data collected in the Geo-Rating project. We establish significant positive relationship between bridging social capital and urban development in Russia. Bonding social capital works in the opposite direction: its impact on development is negative. It is further shown that the transmission mechanism between social capital and economic outcomes is based on municipal governance: bridging social capital improves government accountability, whereas bonding social capital reduces the political costs of malfeasance and thus facilitates the abuse of power.
Демонстративное потребление подростков в пространстве современной школы
Ким Н. В. Известия Академии управления: теория, стратегии, инновации. 2011. № 5. С. 71-74.
Социальная психология: вопросы теории и практики. Материалы III Ежегодной научно-практической конференции памяти М.Ю. Кондратьева (10–11 мая 2018 г.).
М.: ФГБОУ ВО МГППУ, 2018.
Consumer Cooperatives and Liberal Idea In Russia
Menyashev R. Economics. EC. Высшая школа экономики, 2011. No. 05.
A popular view in Russian studies argues that underdevelopment of Russian civil society is partly responsible for the failure of liberal idea in Russia. The fragmented society may see no alternative to massive government regulation, which is why support for a strong state is so high. If this logic is true, the dierences in civicness across urban societies should show up in dierent levels of liberal parties' support. The paper estimates this eect. It was found that the transition from the most passive urban society to the most active in the sample increases the vote for liberal parties by a third. A unit increase in the number of consumer cooperatives per 1000 of citizens leads to a 3.5% drop in Communist Party results in 1995 and a 4% drop in United Russia votes in 2007. To demonstrate the causality we instrument the development of civil society by the number of years since the foundation of the rst university in each city.
Потребительская социализация в отечественных и зарубежных психологических исследованиях
Ким Н. В. Социально-экономические явления и процессы. 2011. № 11. С. 345-348.
Is individual social capital linked to the implementation of entrepreneurial intentions?
Tatarko A. Basic research program. WP BRP. National Research University Higher School of Economics, 2013. No. 25.
The present study reveals the role of individual social capital in the implementation of a person’s intention to start their own business and reveals how individual social capital contributes to this action. The basic premise of our study is that individual social capital facilitates people’s implementation intention to start their own business. The sample consists of a group of respondents (N=269) who intended to start their own business (intenders) and another group (non-intenders) who did not intend to (N=270). We combined the reasoned action approach (Fishbein & Aizen, 2010) with the individual social capital approach (Van Der Gaag & Snijders, 2004) to study intention and implementation. The study showed that the intenders had more resources provided by formal (organizations and associations) and informal networks and relationships. These resources had a direct and indirect impact (through the perceived behavioral control) on their intention to start their own business. We concluded, that individual social capital can facilitate the implementation of entrepreneurial intention. A year later, we performed panel research and carried out another study by re-interviewing respondents who had expressed their intention to start their own business in the next 2 years. It was found that respondents who opened a business only a year later had higher social capital than those who did not. To explain the psychological mechanism underling the relation between intention and implementation, we use the term “the buffering effect of social support”, which means that people who feel potential support are less susceptible to stressful situations and circumstances than people who do not feel potential support. Key words: individual social capital, entrepreneurial intention, theory of planned behavior, the buffering effect of social support, perceived behavioral control. JEL Classification: Z13.
Социальный капитал и модели экономического поведения
Татарко А. Н. В кн.: Ценности культуры и модели экономического поведения. М.: Спутник+, 2011. Гл. 13. С. 253-275.
Constructing Identities And Boundaries: Fashion And Clothing Of Working And Middle Class Youth In Contemporary Russia
Margarita Kuleva. Humanities. HUM. Basic Research Programme, 2015. No. 85.
Clothing and fashion play significant role in the process of ageing, and help put bodily experiences in the context of culture. It is especially important for young people as social subjects, who are starting to become independent but do not have sufficient experience and social competences to do this.    This paper explores how youth of middle and working class in Russia use clothing to denote their social identity and construct boundaries.The paper is based on materials of 81 IDI with young people from St. Petersburg.
Экономическая активность населения России в 1990-е гг.
Гимпельсон В. Е. Проблемы рынка труда. WP3. Высшая школа экономики, 2002. № 01.
University Students’ Use of Information and Communication Technologies (ICT) in Russia: A Focus on Learning and Everyday Life
Porshnev A., Giest Hartmut. Seminar.net. 2012. Vol. 8. No. 1. P. 27-53.