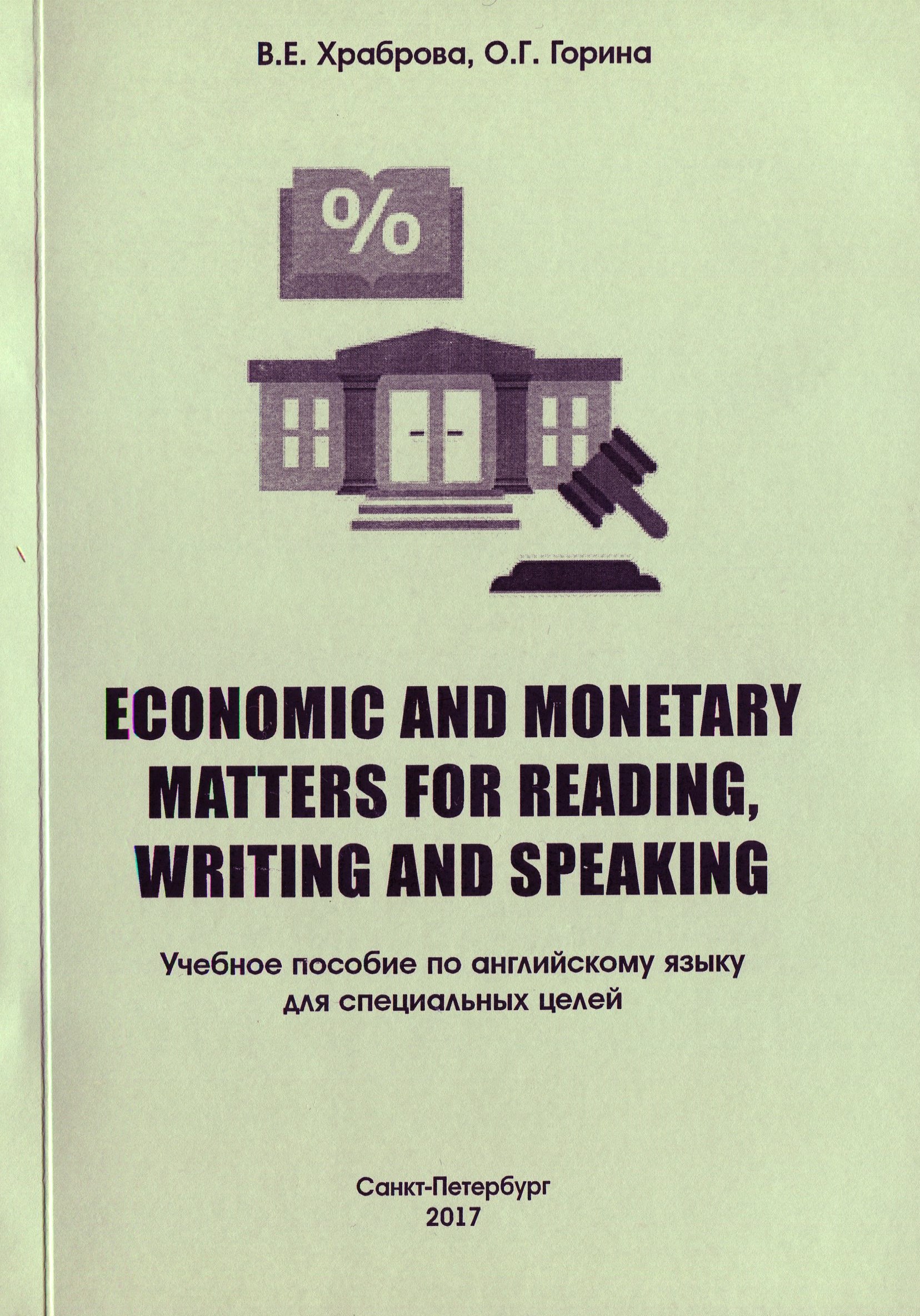 The textbook is meant for students continuing to study English (levels B1-B2 according to the European Framework) and majoring in science. The exercises and tasks are aimed at developing speaking, writing and reading skills on the basis of authentic texts on the achievements of scientists rewarded the Nobel Prize in the years 2000-2014

The book is designed to provide assistance to economics students (CEFR correlation: B2-C1) in studying English for Specfic Purposes (ESP) and arouse their interest in global economic problems.  Authentic texts  on  economic conditions of selected OECD member-countries  alongside  Brazil, China, India, Mongolia  are aimed at developing reading, writing, speaking, lexical  and critical thinking skills through a variety of exercises.

The Necessity for Integration of Critical Media Literacy within English for Specific Purposes (ESP) Journalism
Sebryuk A. RUDN Journal of Language Education and Translingual Practices. 2017. Vol. 14. No. 4. P. 694-702.

Critical media literacy has gained much importance in Western educational curricula lately but still remains insufficiently explored and implemented in the English language education in Russian universities. This article explores the theoretical foundations of critical media literacy, discusses the necessity to focus on developing students’ critical thinking skills with regard to the proper use of media in the context of English for journalism and provides examples of practical applications. Most English for Specific Purposes (ESP) courses that are designed for future journalists and specialists in media communications are focused solely on either theoretical knowledge about the profession or on general knowledge about the professional world and the language it uses, which is clearly not enough for a successful future activity. The rapid development of the mass media causes a need for journalists of a new type: creative professionals, people who are able to access, analyze, evaluate, distribute media messages and act using all forms of communication. On the basis of the works of leading Russian and international researchers in the field of media education, the author offers a rationale for incorporating critical media literacy into the process of English language acquisition.  Therefore, strategies that can be used to strengthen critical thinking abilities are given as well as an in depth analysis outlining the benefits of media literacy for journalism students.

At present, choosing a course book that satisfies  students’ expectations studying IT and meets modern standards of higher education is a challenging task  for the teacher of the ESP (English for specific purposes) course ‘English for Information Technology’. In the field of IT, where knowledge is updated by about 30% each year, the content of existing textbooks quickly becomes obsolete and does not motivate students. To ensure the link between learning and real life with its modern trends in IT development, a course book “English for IT” was introduced. It is based on authentic internet video resources, such as YouTube and TED Talks and covers various areas where information technologies are currently applied. The paper reveals some methodological aspects used in a course book design followed by some examples of the tasks targeted at developing language skills in the aspects of listening, reading and the lexical and grammatical skills of speaking.

Экфрастический дискурс в романе Трейси Шевалье "Девушка с жемчужной сережкой
Тулякова И. И., Бочкарева Н. С. Мировая литература в контексте культуры. 2008. № 3(1). С. 150-154.
Технологии работы с текстовой и фактографической информацией. Словарь-справочник
Шаров А. Г. МегаВерсия, 2007
University Admission In Russia: Do the Wealthier Benefit from Standardized Exams?
Prakhov I., Yudkevich M. M. Education. EDU. Высшая школа экономики, 2012. No. 04.
This paper examines the impact of family income on the results of the Unified State Examination (the USE) and university choice in Russia. We argue that, even under the USE, which was introduced instead of high school exit exams and university-specific entrance exams, entrants from wealthy households still have an advantage in terms of access to higher education, since income positively affects USE scores through the channel of a higher level of investment in pre-entry coaching. Moreover, richer households make more effective decisions about university. We have found positive and significant relationships between the level of income and USE results for high school graduates, with an equal achievement before coaching. We subsequently propose that students from the most affluent households do invest more in additional types of preparation (pre-entry courses and individual lessons with tutors), and those extra classes provide a higher return for children from this particular income group. Finally, we show that holding the result of the USE equal, students with good and fair marks from wealthy families are admitted to universities with higher average USE score than those from poorer families. As a result, we can observe that income status is a factor that significantly influences enrollment to university.
Системные проблемы надёжности, качества, информационно-телекоммуникационных и электронных технологий в инновационных проектах (ИННОВАТИКА - 2011). Часть 1
Ч. 1. М.: Энергоатомиздат, 2011.
Государственная политика Российской Федерации в области образования: понятие и законодательные принципы
Козырин А. Н. Гражданин и право. 2010. № 11. С. 14-22.
2D:4D Asymmetry and Academic Performance: Evidence from Moscow and Manilа
Nye J. V., Androushchak G., Desierto D. et al. Education. EDU. Высшая школа экономики, 2011. No. 01.
Exposure to prenatal androgens affects both future behavior and life choices. However, there is still relatively limited evidence on its effects on academic performance. Moreover, the predicted effect of exposure to prenatal testosterone (T) - which is inversely correlated with the relative length of the second to fourth finger lengths (2D:4D) - would seem to have ambiguous effects on academic achievement since traits like confidence, aggressiveness, or risk-taking are not uniformly positive for success in school. We provide the first evidence of a non-linear relationship between 2D:4D and academic achievement using samples from Moscow and Manila. We find that there is a quadratic relationship between high T exposure and markers of achievement such as grades or test scores and that the optimum digit ratio for women in our sample is lower (indicating higher prenatal T) than the average. The results for men are generally insignificant for Moscow but significant for Manila showing similar non-linear effects. Our work is thus unusual in that it draws from a large sample of nearly a thousand university students in Moscow and over a hundred from Manila for whom we also have extensive information on high school test scores, family background and other potential correlates of achievement. Our work is also the first to have a large cross country comparison that includes two groups with very different ethnic compositions.
Studies in the Verbal Morphology of Soqotri II: Weak and Geminated Roots in the Basic Stem
Наумкин В. В., Bulakh M., Cherkashin D. et al. Zeitschrift für Arabische Linguistik. 2016. Vol. 63. P. 19-60.