The achieved positions in the business elite system for the first time in the Russian post-Soviet context set the tasks of socio-economic self-determination before the second generation of owners of large businesses, their heirs. Will they simply be beneficiaries of property or business successors, will they be engaged in something different in the professional plan or will they prefer to spend? The answers to these questions will allow us to contour the research field of social mobility in these social strata. 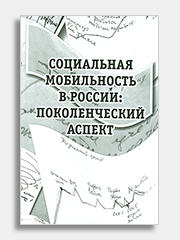 The monograph contains the results of large-scale collective project on Integrated Studies of social mobility in modern Russia. Theoretical and empirical analysis are based on the proposed authors multidimensional social mobility concepts or concepts “Broad life changes” that take into account different dimensions of social and spatial movements. In the object of researchers interest included social strata that are at different poles of the social hierarchy and representing both "top" and and the "bottoms" of Russian society. Combined methodological approach and use of mix methods allows you to present the processes mobility as through the lens of representative population polls, and through these interviews. In addition to objective characteristics of social mobility considered more complex phenomena associated with subjective mobility, such as habitus, motivational repertoire of mobility, social and cultural capital. Monograph supplement and enrich the materials of external participants, including international, working in similar paradigms.

The article summarizes some of the prelimi­nary theoretical findings of the research project Phenomena of Order in Mobile Communications carried out at the Center of Fundamental Sociol­ogy of the National Research University "Higher School of Economics." The author's main idea is that the concept of mobility in sociology is undergoing substantial changes. For many years sociologists were interested above all in vertical mobility as movement between social positions. Today there has arisen a new interest in move­ments in physical space. The lessening of political obstacles to travel, motorization, the emergence of electronic means of communication, the use of so-called mobile gadgets are all characteristic and familiar features of a new mobility which, howev­er, has certain no less evident yet relatively rarely thematized consequences. The study of these con­sequences enables one to say that the new mobility has a paradoxical character: many things about it contradict the very concept of mobility and make it possible to take a fresh look at the present-day way of life.

In this article, we discuss the main theoretical approaches to the interpretation of migration biographies and distinguish the main motives and factors of spatial movements. We also analyze the relationship between migration movements and social mobility. In addition, considerable attention is given to key methodological approaches to the analysis of migration and migration biographies. In particular, we examine the biographical method to reconstruct the trajectory of the migration of the individual throughout his or her life. Also highlighted, in particular, is the use of advanced methods of statistical analysis – event history analysis and sequence analysis – which take a considerable amount of time and require ample creativity in preparing data.

Perception Of Inequality And Social Mobility
Gimpelson V. E., Monusova G. Economics/EC. WP BRP. Высшая школа экономики, 2014. No. 84.
This paper explores the perceptions of inequality and their associations with social mobility exploiting the ISSP and LITs cross-country data set. These perceptions vary across countries as well as across individuals within countries. We try to explain this variation by examining the diverse opportunities for vertical social mobility  available to individuals. The main research question raised in the paper is whether our perception of income differentiation is driven by experience of past mobility and availability of the upward leading instruments. In other words, is a more socially mobile society more tolerant  to income inequality than a less mobilite and segmented one? The intuitive answer seems to be an obvious "yes", but empirical evidence is still scarce.
Противоречивая роль образования в траекториях социальной мобильности
Стрельникова А. В. В кн.: Социальная мобильность в России: поколенческий аспект. М.: Институт социологии РАН, 2017. Гл. 9. С. 178-189.
Expectations and Reality. Social Mobility in the Context of Equal Opportunities
Shkaratan O. I. Sociological Research. 2012. Vol. 5. No. 3. P. 38-70.

The evolution of scientific views of the problem of social mobility illustrates the complexity of analyzing mobility in a context of social change, but also shows the societal benefits of a meritocratic principle of social selection.