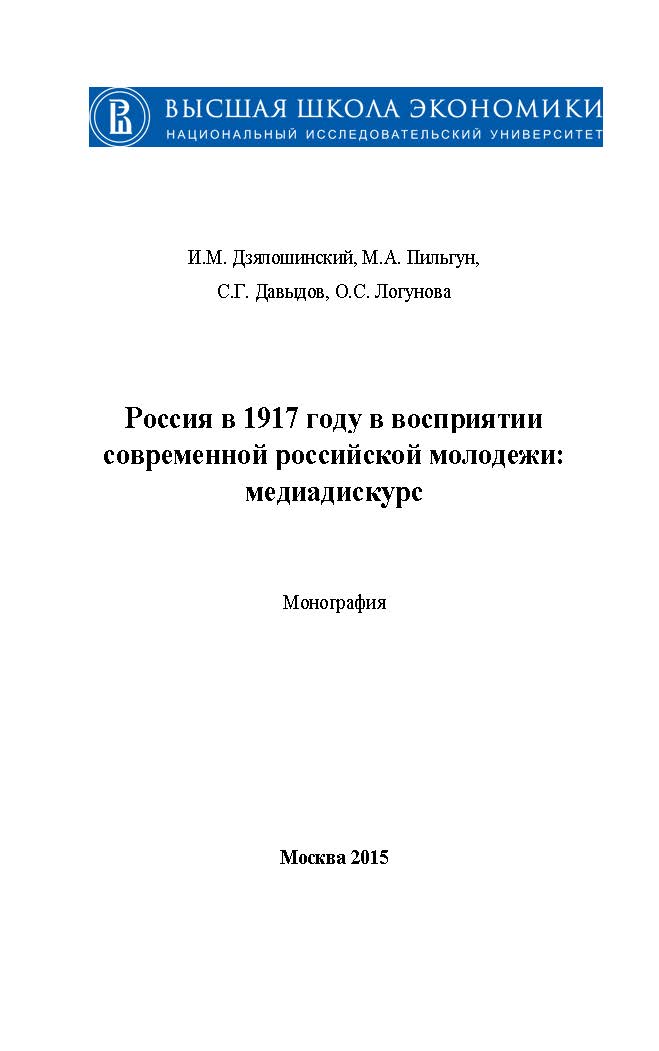 Экономическая активность населения России в 1990-е гг.
Гимпельсон В. Е. Проблемы рынка труда. WP3. Высшая школа экономики, 2002. № 01.
«I Didn’t Know You Can’t Plan So Far Ahead»: Symbolic Logics Behind The Choice Of Vocational Education In Russia»
Pavlenko E. Education. EDU. Высшая школа экономики, 2020
This research studies the role of culture in reproducing inequality through educational decision-making (VE) students in Russia. We show how the way they meaningfully map their options affects their decisions and outcomes. We built upon the conceptual approach of Hodkinson, specifically “horizons of action” in studying how young people are restricted by the “horizon of action” in their opportunities to see all the options available to them. We expand Hodkinson’s approach by suggesting that the “horizon of action” is a symbolic structure that renders reality as a meaningful frame of reference which is the result of meanings shaping young people’s outlook. Using this approach, we extract four complexes of meanings which we call “symbolic logics”. We investigate further how “serendipity” and “agency” are woven into young people's symbolic logics of choice. We show that students rely on a meaningful frame that allows them to be agents enacting a narrative of “bringing adulthood closer”, but they are also highly uncertain about their future and are open to serendipity which plays a large role in their trajectories.
Concept Note for the Impact Assessment of dance4life
Kwaak van der A., Hooft K. ‘., Krasnopolskaya I. et al. Amsterdam: Development Policy & Practice, 2012.

At any Given Time, There Is Crisis Somewhere. Characteristics of Young People Under the Conditions of the Economic Slump.
Лукьянова Е. Л., Sabirova G. Russian Education and Society. 2013. Vol. 55. No. 9. P. 3-22.

Housing Rent Dynamics and Rent Regulation in St. Petersburg (1880-1917)
Limonov L. E., Konstantin A. Kholodilin, Waltl S. R. Working Papers of Luxemburg Institute of Socio-Economic Research . LISER Working Papers. Luxemburg Institute of Socio-Economic Research (LISER), 2019. No. № 2019-03 .
This article studies the evolution of housing rents in St. Petersburg between 1880 and 1917, covering an eventful period of Russian and world history. We collect and digitize over 5,000 rental advertisements from a local newspaper, which we use together with geo-coded addresses and detailed structural characteristics to construct a quality-adjusted rent price index in continuous time. We provide the first pre-war and pre-Soviet index based on market data for any Russian housing market. In 1915, one of the world’s earliest rent control and tenant protection policies was introduced in response to soaring prices following the outbreak of World War I. We analyze the impact of this policy: while before the regulation rents were increasing at a similar rapid pace as other consumer prices, the policy reversed this trend. We find evidence for official compliance with the policy, document a rise in tenure duration and strongly increased rent affordability among workers after the introduction of the policy. We conclude that the immediate prelude to the October Revolution was indeed characterized by economic turmoil, but rent affordability and rising rents were no longer the dominating problems.
Молодёжь в современном обществе: проблемы и перспективы
Edited by: А. Б. Лымарь М.: Издательство РУДН, 2014.
Немецкий школьный и студенческий социолект в письменных источниках первой половины XX века
Россихина М. Ю. В кн.: Лингвистический вестник. Ежегодный международный сборник научных трудов. Вып. 9. Брянск: Брянский государственный университет им. ак. И.Г.Петровского, 2014. С. 83-94.

The article dealts with German school and student sociolects of the first half of the XXth century. The data under linguistic analysis are lexicographic sources and theoretical articles of leading German linguists of that time. The focus is on the dictionary of Basler Studentensprache pubished in 1910. There is carried out comparative analysis of the youth sociolect of the past and the present and there singled out general tendencies in enriching their vocabulary.

Extracurricular Sport and Risk Behaviour: Are They Related?
Khodorenko D. K., Titkova V. Education. EDU. Высшая школа экономики, 2016. No. 38.
This study focuses on the relationship between extracurricular activity (specifically, group and individual sports) and adolescent drinking behaviour. To examine how participation in sports is related to the frequency and intensity of alcohol consumption we use hierarchical regression analysis. Our sample consists of 2961 students from 29 vocational schools in St. Petersburg. We demonstrate that participation in individual and team sports increases the risk of teenagers being involved in drinking behaviour; however the frequency of regular alcohol consumption is not associated with participation in sports. Students’ gender, socio-economic status and cultural capital, as well as residence status (living with parents or in the dorm) were significantly associated with teenage drinking behaviour: females and students living in a dorm were at greater risk of being involved in drinking, while regular alcohol consumption was more prevalent among males and students with a higher socio-economic status.
当代俄罗斯青年的消费和休闲 (Youth Consumption and Leisure in Russia)
Kozyreva P. M., Nizamova A. E., Smirnov A. I. In bk.: 青年与社会变迁：中国与俄罗斯的比较研究 (The youth and social change: a comparative study between China and Russia). Beijing: Social Sciences Academic Press, 2014. P. 128-142.