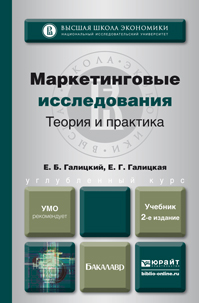 Business English II: учебно-методическое пособие по деловому английскому языку
Gridneva N. N. St. Petersburg: OOP, 2011.
This study guide, being a logical continuation of the book by N.Gridneva and S.Solntsev ‘Business English’, is for the students of non-linguistic departments who study Business English. Its structure consists of several sections including a text on one of the five topics, a series of pre- and after-reading tasks on its understanding, and also a range of various vocabulary and grammar exercises. This book helps students work on the topics more profoundly either in class or all by themselves. Besides, it can be also useful for all people studying Business English.
The Model of Contemporary Marketing Practices (CMP) in the Russian Market: Evidence from Empirical Research
Vera A. Rebiazina, Olga A. Tretyak. Management. MAN. Высшая школа экономики, 2014. No. WP BRP 21/MAN/2014.
Previous research has shown that emerging markets represent a significant part of the world economy and are expanding their share. However, they are still not well examined in the marketing field. Russia is especially neglected in the academic discussion of overall marketing strategy. Previous research indicates that the model of “Contemporary marketing practices” (CMP) is commonly used as a classification scheme of marketing practices both in developed and developing markets. This article examines how “Contemporary marketing practices” (CMP) works in Russia and tests the CMP model in the Russian market to reveal what types of marketing practices (transactional marketing, database marketing, interactive marketing, network marketing and relationship marketing) are most often used by Russian companies. The article is based on a quantitative study of 329 Russian companies and includes a cluster analysis that shows that types of marketing practices are common for the Russian market. Empirical results of cluster analysis shows that basic marketing practices are widely found in emerging Russian market though their characteristics differ dramatically from those on developed markets.
Институт минимальной заработной платы в странах ОЭСР
Вишневская Н. Т. Проблемы рынка труда. WP3. Высшая школа экономики, 2005. № 03.
The paper examines the institute of minimum wage in developed and transition economies and in a number of the developing countries. First of all the institutional mechanism of minimum wage fixing is considered. One of the sections explores the dynamics of absolute and relative levels of minimum wage. The special attention is paid to the impact of the institute of minimum wage on the labour market. The author considers the mechanism of transmission of the minimum wage increases on the employment and unemployment dynamics. The paper also contains the result of the empirical research. The experience of many countries witnesses that large increases in minimum wage levels lead to the stagnation of the employ-ment, especially of the disadvantaged groups. The negative effect is larger for the companies with higher share of labour costs and more active use of unqualified labour, that is small businesses and agricultural enterprises. One of the main conclusions is that the minimum wage is not an effective tool of the poverty reduction as the majority of the recipients live in households of average and upper average income.
GAMIFICATION TOOLS AND PRACTICIES OF RUSSIAN COMPANIES
Morozova A. I., Rozhkov A. Management. MAN. Высшая школа экономики, 2017
In this paper we explore the concept of gamification and its business applications in the Russian companies. Gamification has been introduced in 2003 and since that time it has acquired a wide recognition as an efficient tool to enhance front-office and back-office business processes increasing performance and boosting engagement of the participants. Gamification refers to the use of game elements and designs in non-game environments. As a result customers and employees involved stay more focused and motivated to accomplish the chosen goal. We explore gamification practices of the Russian companies including application areas, funding and perceived efficiency of these initiatives. As the result we outline four groups of practices observed on the market.
Численность и состав российской бюрократии: между советской номенклатурой и госслужбой гражданского общества
Гимпельсон В. Е. Проблемы рынка труда. WP3. Высшая школа экономики, 2002. № 05.
Барбер М. Приказано добиться результата. Как была обеспечена реализация реформ в сфере государственных услуг Великобритании / пер. с англ. под науч. ред. Я.И. Кузьминова, А.В. Клименко. М.: НИУ ВШЭ, 2011. 394 с. (рецензия)
Жулин А. Б., Кнутов А. В., Синятуллина Л. Х. Вопросы государственного и муниципального управления. 2012. № 1. С. 185-190.
Формирование и развитие инновационной экономики: материалы международной научно-практической конференции
Edited by: Г. В. Жданкин, Л. Н. Ирхина, А. Чиликов Н. Новгород: Нижегородская государственная сельскохозяйственная академия, 2010.
Социально-экономические преобразования и проблемы
Edited by: З. М. Саралиева, А. А. Иудин Вып. 1. Н. Новгород: Издательство НИСОЦ, 2011.
The impact of state-controlled banks on the Russian banking sector
Vernikov A. V. Eurasian Geography and Economics. 2012. Vol. 53. No. 2. P. 250-266.