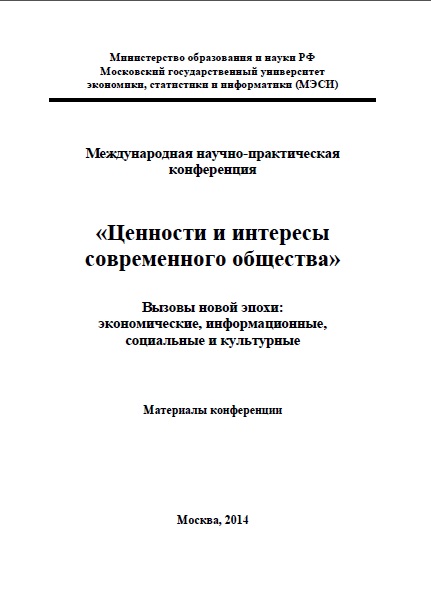 This study aims to analyse the tenure of head coaches in college women’s soccer in the United States and puts the focus on the influence of race and gender. The analysis includes individual characteristics of coaches (educational and professional background), team performance, institutional characteristics, and geographical differences (at the state level) from 1977 until 2015. The main results show that African American coaches and women have a significantly shorter tenure in these college institutions. Other factors related to the background of coaches and the characteristics of institutions also play a significant role. The findings are relevant for coaches from minority groups and athletic departments, who are interested in equity in sport. Future research may use an alternative approach to investigate the causes of tenure disparity in college women’s soccer.

THE IMPACT OF VALUES, GENDER AND EDUCATION ON CREATIVE BEHAVIOUR IN DIFFERENT DOMAINS IN RUSSIAN REGIONS
Lebedeva N., Bushina E. Basic research program. WP BRP. National Research University Higher School of Economics, 2015. No. WP BRP 34/PSY/2015.
This paper presents results of the research into different types of creative behaviour and their predictors in the Central and North-Caucasus federal districts of Russia (N=2046). The revised PVQ-R questionnaire of Schwartz for values measurement and the modified Creative Behaviour Inventory (CBI) of Dollinger for creative behaviour measurement were used. The model with five different domains of creative behaviour: visual art, literature, craft, performance, organizational creativity and generalized creativity was confirmed in a simultaneous CFA in both regions. This model with values, gender and level of education as predictors was tested using structural equation modelling with AMOS 19.0. Values, education and gender influence creative behaviour in different domains. The value of Openness to Change positively, and the value of Conservation negatively influence creative behaviour in different domains in both the regions. The impacts of gender and education on creativity have domain and regional specifics: craft is a ‘female’ domain of creativity whereas organizational creativity is a ‘male’ one; higher education promotes organizational and visual creativity in both regions and literature creativity in the North Caucasus.
2D:4D and Life Outcomes: Evidence from the Russian RLMS Survey
Polyachenko S. S., Nye J. V., Bruhanov M. Economics/EC. WP BRP. Высшая школа экономики, 2014. No. WP BRP 78/EC/2014.
Using a large sample drawn from families in the Moscow and Moscow region which are part of the Russian RMLS longitudinal survey we observe clear links between measured 2D:4D digit ratios and a variety of life outcome measures, even with the inclusion of multiple controls. Contributing to existing empirical findings, we found statistically significant empirical associations of 2D:4D with higher educational attainment, occupational outcomes, knowledge of foreign language, smoking, engaging in sport activities and with some aspects of respondent's self-esteem. In general, the character of detected empirical associations are different for women and men, as it was documented in our previous studies.
Blended Learning in Software Engineering Education: the Application Lifecycle Management Experience with Computer-Supported Collaborative Learning
Neznanov A., Maksimenkova O. V. In bk.: Proceedings of 18th International Conference on Interactive Collaborative Learning (ICL 2015). Florence: Curran Associates, Inc., 2015. P. 646-653.