This book constitutes the refereed proceedings of the 7th International Workshop on Multiple Access Communications, MACOM 2014, held in Halmstad, Sweden, in August 2014. The 12 full papers presented were carefully reviewed and selected from 22 submissions. They describe the latest advancements in the field of multiple access communications with an emphasis on reliability issues, physical layer techniques, cognitive radio, medium access control protocols, and video coding.

Future generation communication systems will have to endure interference induced by communication systems operating within the same frequency bands. Recently several coded DHA FH OFDMA systems employing rank-based detectors able to solve this problem were proposed. Unfortunately such detectors have relatively high complexity. In what follows a reduced-complexity detector using only column sorting for a coded DHA FH OFDMA employing a nonbinary convolutional inner code is proposed. The proposed detector is compared with the rank convolutional detector in terms of performance, complexity and delay. 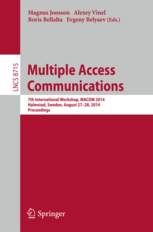 Controlling of clock synchronization in WSNs: structure of optimal solutions
Manita L. Cornell University Library, 2014
We considered the control problem for wireless sensor networks with a single time server node and a large number of client nodes. The cost functional of this control problem accumulates clock synchronization errors in the clients nodes and the energy consumption of the server over some time interval $[0,T]$. For all possible parameter values we found the structure of optimal control function. It was proved that for any optimal solution $\widehat{R}\left(t\right)$ there exist a time moment $\tau,$ $0\leq\tau<T$, such that $\hat{u}(t)=0,$ $t\in[\tau,T]$, i.e., the sending messages at times close to $T$ is not optimal. We showed that for sufficiently large $u_{1}$ the optimal solutions contain singular arcs. We found conditions on the model parameters under which different types of the optimal control are realized.
M&A Cooperative Games
Maria A. Nastych. In bk.: VII International Conference on Applied Economics Contemporary Issues in Economy - Growth Perspectives in Europe?. Turin: Polish Economic Society Branch in Torun, Institute of Economic Research, 2013. Ch. 90. P. 239-239.

The collection contains papers accepted for the Fourth International Conference Game Theory and Management (June 28–30, 2010, St. Petersburg University, St. Petersburg, Russia). The presented papers belong to the field of game theory and its applications to management. The volume may be recommended for researches and post-graduate students of management, economic and applied mathematics departments.

Универсальная платформа для мониторинга эффективности использования ресурсов на основе технологии беспропроводных сенсорных сетей
Восков Л. С., Комаров М. М., Ефремов С. Г. Автоматизация и IT в энергетике. 2009. № 1. С. 41-43.
Экономико-математические методы и модели. Курс лекций
Королев А. В. СПб.: Издательство СПбГЭТУ "ЛЭТИ", 2011.
Dictators’ Behavior Under Conditions of Economic Sanctions Cumulative Effect
Чмель К. Ш., Демин А. В., Казанцев К. И. Political Science. PS. Высшая школа экономики, 2017. No. WP BRP 50/PS/2017.
Economic sanctions, like the most of political events involving numerous states, are almost always explicitly aimed to alter internal policies and affect domestic issues. Sanctions are not a discrete event, rather they are a long lasting insidious process. It is significant to consider not only the state of the country under sanctions or without them, but also the effect of the time under sanctions. Hence, the research question is as follows: How does cumulative effect of sanctions influence the dictators behavior in terms of repressions and co-optation? In order to find a feasible answer to that question, first, we build a theoretical model and draw empirical implications from it. The main argument that we develop in the paper is as follows. The overall effect of sanction is robustly important for the dictator, fostering repressions and co-optation (separately treated) as the ways of buttressing the regime legitimacy. Moreover, cumulative effect of sanctions (i.e. the influence of all the previous periods under sanctions) increases the levels of repressions with decreasing marginal effects.
Game Theory and Management. Collected abstracts of papers presented on the Fifth International Conference Game Theory and Management
St. Petersburg: Graduate School of Management, St. Petersburg University, 2011.
IMPROVING ENERGY EFFICIENCY OF WIRELESS CAMERA NETWORKS BASED ON IEEE 802.15.4 STANDARD
Карпов А. В кн.: Distributed computer and communication networks: control, computation, communications (DCCN-2013). М.: Техносфера, 2013. С. 200-205.

In this paper is proposed a method, which helps to increase the energy efficiency of wireless camera sensor networks. The method is based on image recognition on low-power end devices of the system.

To verify realtime properties of UML statecharts one may apply a UPPAAL, toolbox for model checking of realtime systems. One of the most suitable ways to specify an operational semantics of UML statecharts is to invoke the formal model of Hierarchical Timed Automata. Since the model language of UPPAAL is based on Networks of Timed Automata one has to provide a conversion of Hierarchical Timed Automata to Networks of Timed Automata. In this paper we describe this conversion algorithm and prove that it is correct w.r.t. UPPAAL query language which is based on the subset of Timed CTL.