This issue initiates a series of almanacs with Evolution as its general title; these almanacs are aimed at the consolidation of those researchers who study all the possible types of evolutionary processes. The interdisciplinary studies have demonstrated their effectiveness, whereas the study of evolution is one of the most fruitful areas of interdisciplinary knowledge where representatives of natural, mathematical, and social sciences, as well as the humanities can find a common field for their research. The almanac is designed to present to its readers the widest possible spectrum
of subjects and problems: from the approaches of the universal evolutionism to the analysis of particular evolutionary regularities in the development of biological, abiotic, and social systems, culture, cognition, language, etc.

The first section of the almanac presents a general sketch of the universal evolution, its main phases, vectors, and trends. The second section is dedicated to the problems of comparisons of different types of macroevolution, as well as to the possibilities to use achievements of certain fields of evolutionary research in its other fields. The third section deals with major issues of social evolution. The topics of all the sections and articles intertwine rather tightly, that actually transforms the present issue of the almanac into a collective monograph dedicated to the search for contours and instruments of evolutionary megaparadigm. The almanac's articles present a wide panorama of the application of various approaches and concepts in the framework of this emergent general paradigm that will allow to detect in a much more effective way both fundamental similarities and essential differences between different types of evolutionary dynamics.

This almanac will be useful both for those who study interdisciplinary macroproblems and for specialists working in focused directions, as well as for those who are interested up to a certain degree in the evolutionary issues of astrophysics, geology, biology, history, anthropology, linguistics, and so on.

Chapters
Introduction. Evolutionary Megaparadigms: Potential, Problems, Perspectives.
Grinin L. E., Korotayev A., Carneiro Robert L. et al., , in: Evolution: Cosmic, Biological, and Social. .: Volgograd: Uchitel, 2011.. P. 5-29.
The formulation of the first scientific theories of the evolution of nature began at least two centuries ago. However, the philosophical roots of evolutionary ideas are much older (see, e.g., Vorontsov 1999; Asmus 2001; Chanyshev 1976, 2001; Barg 1987; Ilyushechkin 1996; Losev 1977; Nisbet 1980). An incipient understanding of the historical dimension of natural processes ...
Biological and Social Aromorphoses: A Comparison between Two Forms of Macroevolution
Grinin L. E., Марков А. В., Korotayev A., , in: Evolution: Cosmic, Biological, and Social. .: Volgograd: Uchitel, 2011.. P. 162-211.
The discussions among the evolutionists on the possibilities and limits of the application of the Darwinian theory to the study of social evolution have been going on for more than a century and a half (on the recent discussions see, e.g., Hallpike 1986; Pomper and Shaw 2002; Mesoudi, Whiten, and Laland 2006; Aunger 2006; Barkow 2006; ...
Social Evolution: Alternatives and Variations (Introduction).
Bondarenko D. M., Grinin L. E., Korotayev A., , in: Evolution: Cosmic, Biological, and Social. .: Volgograd: Uchitel, 2011.. P. 212-250.
It has always been peculiar to evolutionists to compare social and biological evolution, the latter as visualized by Charles Darwin.[1] But it also seems possible and correct to draw an analogy with another great discovery in the field of evolutionary biology, with the homologous series of Nikolay Vavilov (1921, 1927, 1967). However, there is no ...
Research target: History and Archeology Political Science, International Relations, and Public Administration Sociology (including Demography and Anthropology Philosophy, Ethics, and Religious Studies
Priority areas: humanitarian
Language: English
Text on another site
Keywords: evolutionSocial EvolutionEvolutionary MegaparadigmsThe Origin of SpeciesThe Principles of Psychology 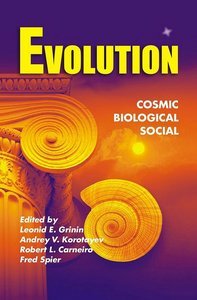