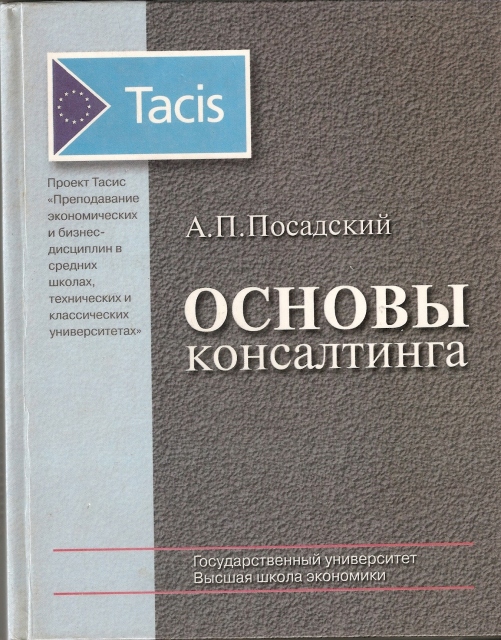 Similar publications
Руководство по консультированию промышленных предприятий в странах Восточной Европы
М.: Издательский дом НИУ ВШЭ, 1999.
Контракты в академическом мире
Edited by: М. М. Юдкевич М.: Издательский дом НИУ ВШЭ, 2011.
The book introduces the reader to the current state of the theory of contracts and its application to the academic jobs market. It is based on theoretical works that study academic contracts using a traditional contract theory, as well as works which analyze several national education systems and their typical contracts. The book contains translated articles, which in many cases have already become classics, as well as articles and reviews written by Russian authors. These authors examine the specifics of the contracts concluded with the teachers of domestic universities, putting the situation in Russia in the overall global context.
This book is intended for students in economics, sociology of education, students of training programs in educational administration (such as management and staff of universities), and researchers working on the internals of academic markets. It may also interest a wider group of readers who are concerned by problems of educational policy and the functioning of academic markets in different countries.
Теория и практика: о необходимых условиях функционирования устойчивого бизнеса
Юрашев В. В. Маркетинг PRO. 2008. № 3. С. 18-20.
Кредитные рейтинги и их моделирование
Карминский А. М. М.: Издательский дом НИУ ВШЭ, 2015.

Performance measurement is one of the main issues in managerial decision-making. Credit ratings hold a specific place as an assessment tool. As an integral characteristic of fi nancial risks, they provide unifi cation and borrowing costs reduction as well as disclosure of an independent opinion. They can underpin regulatory actions and counterparties’ internal risk-management systems.

This monograph reveals the perception of ratings which has been established in the recent years. The focus is on studies about comparing rating scales, default probability modeling and constructing rating models, including topics on internal and external ratings for fi nancial institutions.

The book is based on research in these fi elds carried out by the author and his colleagues in the past ten years as well as on the experience in teaching master’s degree students at the Higher School of Economics and other universities. It sheds light on the contemporary trends in the research agenda and can be applied to develop a full-fledged master’s course. This book aims at a wide audience of professionals and can be practically applied by regulators and commercial banks.