The book presents a comprehensive value of the Constitution of Russia in the global legal space, including substantiated typology constitutions, defined the modern constitutional model and perspectives of their development. Studied issues of sovereignty and integrity of the state, Federal, and international relations, a new mechanism of state management, as well as the origin and development of the Constitution as the political, socio-economic. the spiritual and intellectual life 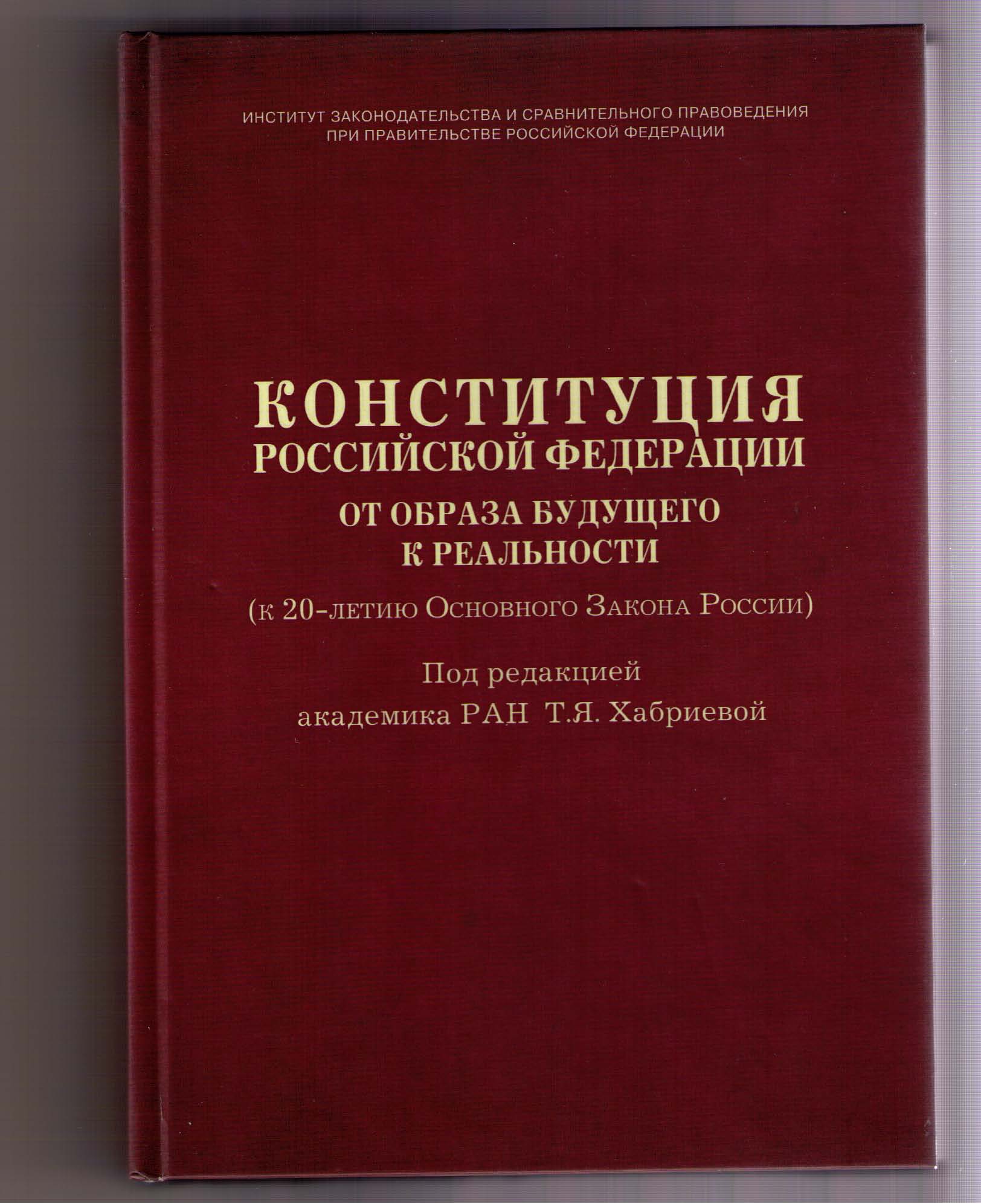 The Legitimacy of the Bolshevik Order, 1917-1918: Language Usage in Revolutionary Russian Law
Borisova T. Y. Law. LAW. Высшая школа экономики, 2012. No. 05.
The article describes and analyzes the legislative politics of revolutionary regimes in Russia in 1917-1918. The author aims to demonstrate the political meaning of the form of early Soviet legislation and its legitimizing effect. The revolutionary legislators often used specific language in the new laws as a vehicle of legitimacy, i.e. to make the people comply. The two main types of legal language used by the Bolsheviks can be interpreted from the perspective of different types of legitimacy. The revolutionary strategy used propagandistic legislation, written in the language of lay people, which urged them to act according to the new law. It can be seen as a request for acts of the people to legitimize the soviets. On the contrary, the traditional strategy employed old bureaucratic means of writing and distributing legislation to the local soviets. The language used by this strategy was closed to the understanding of a lay audience and implied traditions of obeying the law written in familiar legal language, which in turn implied rational/legal legitimacy. The second strategy had already become dominant after the first months of the Bolshevik revolution. This observation demonstrates that from the very beginning of their rule, Soviet leaders approached legislative policy from a technocratic point of view, which determined the further development of Soviet legal theory and practice.
México – Rusia. Culturas y sistemas jurídicos comparados
Mexico: Consejo editorial, H. Cámara de dipuados, 2013.
Ономастический софизм: изменять, а не познавать (о толковании Конституции)
Пферсманн О. Известия высших учебных заведений. Правоведение. 2012. № 4. С. 104-132.

The author of this article restarts the polemics around the realist theory of interpretation. Examining the thesis of this theory about identity of legal interpretation and jurisdictional decision-making, the author proves that confusion between these two different phenomena is based on incorrect use of the term “interpretation”. In the article are discussed six meanings of this term, at least present in legal interpretation, and each meaning must be used in the appropriate context. Undue confusion between these meanings enables the partisans of the realist theory of interpretation to construct “interpretation” as a notion without clear conceptual limits. This argument is designated by the author as an onomastic sophism, as a rhetoric stratagem based on the idea that a term has the same meaning in different contexts. The author repudiates the thesis forwarded by the realists that it is impossible to cognize meaning of legal texts, and draws on the incoherence of this argumentation which lastly recognizes a possibility to attribute a meaning through a judicial decision. In general, as O. Pfersmann argues, the realist theory of interpretation intends to justify changes in constitution through judicial argumentation without considering the order prescribed by the constitution for changes and amendments.

The philosophy of sovereignty, human rights, and democracy in Russia
Antonov M. Law. LAW. Высшая школа экономики, 2013. No. WP BRP 24/LAW/2013.
This paper examines the correlation between the concepts of sovereignty, human rights, and democracy in Russian legal and political debate, analyzing this correlation in the context of Russian philosophical discourse. It argues that sovereignty is often used as a powerful argument which allows the overruling of international humanitarian standards and the formal constitutional guarantees of human rights. This conflict between sovereignty and human rights also recurs in other countries, and many legal scholars demand the revision or even abandonment of the concept of sovereignty. In Russia this conflict is aggravated by some characteristic features of the traditional mentality which frequently favors statism and collective interests over individual ones, and by the state building a “power vertical” subordinating regional and other particularistic interests to the central power. These features and policies are studied in the context of the Slavophile-Westernizer philosophical divide. This divide reveals the pros and contras put forward by the Russian supporters of the isolationist (conservative) policy throughout contemporary history, and especially in the sovereignty debates in recent years. The Russian Constitution contains many declaratory statements about human rights and democracy, but their formulations are vague and have little concrete effect in court battles where the application of international humanitarian law is counterbalanced by the concerns of the protection of sovereignty. These concerns coincide with isolationist and authoritarian policies, which led in 2006 to their amalgamation into the concept of “sovereign democracy.” This concept is considered in this paper to be a recurrence of the Russian conservative tradition. Even though the concept in its literal meaning has been abandoned by its author and supporters, most of its ideas are still on the cusp of the official political discourse which reproduces the pivotal axes of the Russian political philosophy of the 19th century.
Конституция и фундаментальные законы в русском политическом дискурсе XVIII века
Польской С. В. В кн.: «Понятия о России»: К исторической семантике имперского периода. В 2-х томах. Т. 1. М.: Новое литературное обозрение, 2012. С. 94-150.
Verfasslungsmassige Grundzuge des Rechts auf Socialfursorge in Russland
Buyanova M. Justitias Welt. 2012. No. 11.

The article is devoted to the main constitutional principles of Russian social security law.

Заключение
Медушевский А. Н. В кн.: Основы конституционного строя России: двадцать лет развития. М.: Институт права и публичной политики, 2013. Гл. Заключение. С. 280-312.
The Concepts of Fundamental Laws and Constitution in the 18th Century Russia
Polskoy S. SSRN Working Paper Series. SSRN Working Paper Series. Social Science Research Network, 2018. No. No. WP BRP 169/HUM/2018.
In this article, we attempt to trace the semantic changes two key concepts of the Modern period - fundamental law and constitution underwent at the 18th century and investigates how these European concepts were adapted and used in the Russian political language. The concept of the constitution and fundamental laws in eighteenth-century political discourse had differing connotations: while the constitution was used mainly to describe the form of government, the concept of fundamental laws referred to historically developing legal traditions which have been adopted as norms of political law. The most radical vision of constitution in the 18th century went further than identify it with the fundamental law, demanding that the latter should enshrine the principles of civil rights and liberties of the Nation, and the legal guarantees thereof. However, this radical view, arising at the end of the century, was far from universal, and the discussion around various understandings of this concept was still to continue for many years.
Конституционная теория и практика публичной власти: закономерности и отклонения. Сборник материалов Международной научной конференции. Москва: Юридический факультет МГУ имени М.В. Ломоносова. 21-23 апреля 2015 г.
Edited by: С. Авакьян М.: Юстицинформ, 2015.

In the domestic literature with increased attention to such issues as constitutional theory, the protection of individual rights and freedoms, form of the state, the status of head of state regulation of international relations can not find the proper coverage, many issues related to the referendum and its consequences. Meanwhile, a referendum (people's will) — the central institution of direct democracy, it is located at the intersection of law and policy, which makes it advisable to study based on a system-integrated method, which finds more and more widely used in law and political science.