The manipulability index in the IANC model

Procedures aggregating individual preferences into a collective choice differ in their vulnerability to manipulations. To measure it, one may consider the share of preference profiles where manipulation is possible in the total number of profiles, which is called Nitzan-Kelly's index of manipulability. The problem of manipulability can be considered in different probability models. There are three models based on anonymity and neutrality: impartial culture model (IC), impartial anonymous culture model (IAC), and impartial anonymous and neutral culture model (IANC). In contrast to the first two models, the IANC model, which is based on anonymity and neutrality axioms, has not been widely studied. In addition, there were no attempts to derive the difference of probabilities (such as Nitzan-Kelly's index) in IC and IANC analytically. We solve this problem and show in which cases the upper bound of this difference is high enough, and in which cases it is almost zero. These results enable us to simplify the computation of indices. 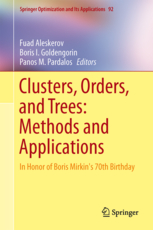 Manipulated Voters in Competitive Election Campaigns
Aköz K. K., Arbatli C. E. Economics. EC. Высшая школа экономики, 2013. No. WP BRP 31/EC/2013.
We provide a game-theoretical model of manipulative election campaigns with two political candidates and a continuum of Bayesian voters. Voters are uncertain about candidate positions, which are exogenously given and lie on a unidimensional policy space. Candidates take unobservable, costly actions to manipulate a campaign signal that would otherwise be fully informative about a candidate’s distance from voters relative to the other candidate. We show that if the candidates differ in campaigning efficiency, and voters receive the manipulated signal with an individual, random noise, then the cost-efficient candidate wins the election even if she is more distant from the electorate than her opponent is. In contrast to the existing election campaign models that do not support information manipulation in equilibrium, our paper rationalizes misleading political advertising and suggests that limits on campaign spending may potentially improve the quality of information available to the electorate.
The difference between manipulability indexes in IC and IANC models
Veselova Y. A. Economics. EC. Высшая школа экономики, 2012. No. 17/EC/2012.

Conference Proceedings report findings presented at the 20th Annual Conference of the National Association of Teachers of English in Russia held in Voronezh in April, 2014. The proceedings might be useful for English language teachersworking at different levels - from University to kindergarten. linguists, interpreters and translators, as well as students and postgraduates majoring in EFL, linguistics and cultural studies.