In 1998 Russia ratified the European Convention on Human Rights (ECHR) and subjected itself to the jurisdiction of the European Court of Human Rights (ECtHR). After a long phase of productive cooperation with the ECtHR, Russian elites started realizing that further transplantation of human rights norms and unconditional execution of ECtHR judgments may lead to dangerous and undesirable results, such as questioning of legitimacy of the current social and political order in Russia, excessive “Westernization” of social and legal norms, serious conflicts with prevailing conservative, traditional values in the Russian society. In this context the creation of a protective mechanism against the Strasbourg Court allowing Russian authorities to block or limit the legal effect of its judgments does not look surprising. Such mechanism was introduced in 2013-2015 and has already been tested several times. The Russian model of such “blocking mechanism” prescribes a central role of the Constitutional Court, which acts like a “guardian” of the Constitution and an “active legislator” ruling on the possibility and exact manners of enforcement of a given ECtHR judgment on behalf of the Russian Federation upon requests from courts and other State bodies. Under this model any judgment of the ECtHR can be declared by the Russian Constitutional Court non-enforceable in Russia if the following two conditions are met: 1) The ECtHR judgment is in contradiction with the Russian Constitution and 2) there are no alternative ways to avoid the conflict with constitutional provisions other than its non-enforcement. The Russian Constitutional Court insists that it has a “right to object”, which may be derived from the Russian Constitution and general principles of international law based on consent of States. 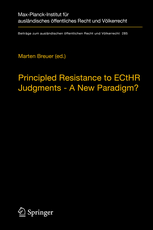