This volume, being the 55th of this Series, contains a wealth of information on bioactive natural products. In Chapter 1, Watson and colleagues have discussed the synthesis of monoterpene indole alkaloids, an important class of structurally diverse natural products, with respect to conventional and biomimetic synthetic approaches.

About 70 biologically active macrocyclic bisbibenzyls (MBBs) have been isolated and structurally elucidated during the last 30 years. Song and Zhao, in Chapter 3, have provided a review on the synthesis of MBBs with diverse pharmacological properties.

Diabetes mellitus is the most common endocrine/metabolic disorder that poses a global health concern. Reyes and colleagues have discussed the hypoglycemic activity of some terrestrial and marine bioactive compounds with potential for treating type 2 diabetes in Chapter 4. In Chapter 5, Pietruszka and coworkers have highlighted the importance of some marine oxylipins that exhibit different bioactive properties.

Depression has become a psychiatric disorder, which leads to various disabilities. Natural compounds like polyphenols and terpenoids have antioxidant and neuroprotective properties and can be used for the treatment of depression. In Chapter 6, Rodrigues et al. review the clinical studies and trials on polyphenols and terpenoids for the treatment of various psychiatric disorders. The lipid A phosphate and their phosphorylated analogues found in Gram-negative bacteria are of major importance because they provide the host with defense against infections from various microorganisms. Paradies and Zimmermann have discussed physical characteristics, isolation, and bioactivity of lipopolysaccharides (lipid A) for developing new vaccines and therapeutics in Chapter 7.

Hydroxycinnamic acids (HCAs) are a group of phytonutrients with numerous beneficial effects on human health that are largely derived from plants. HCAs play important roles like defense against UV rays or pathogenic attack during growth and development of plants. In Chapter 8, El-Seedi and colleagues present a review focusing on the therapeutic effects of HCAs for the treatment of cancer, diabetes, pulmonary, hepatic, neuro-, and cardiovascular diseases. In Chapter 9, Pomilio and Mercader have presented the study of natural anthocyanins and other related flavonoids for the readers, highlighting their possible and preferable uses as health-protecting food dyes over synthetic ones. They have also discussed the anthocyanins isolated from Ipomoea cairica along with their QSAR studies.

Cardiovascular diseases are considered to be a major threat to health. Polyphenols and carotenoids are structurally diverse groups of bioactive compounds isolated from fruits and vegetables, carrying protective effects against endothelial dysfunction. These therapeutic effects have been explored by Yamagata in Chapter 10.

The roots of licorice and ivy leaves have been used in folk medicine and drugs since long. The biological activity of these complexes has been discussed by Yakovishin and Grishkovets in Chapter 11. In Chapter 12, the chemical and biological characteristics of amicoumacins and xenocoumacins are reviewed by Korshun et al. with reference to the preparation of antibiotics.

I hope that this volume will be received with the same enthusiasm as the earlier volumes of this long-standing series the first volume of which was published under my Editorship in 1988. I would like to express my gratitude to Ms. Taqdees Malik and Mr. Mahmood Alam for their assistance in the preparation of this volume. 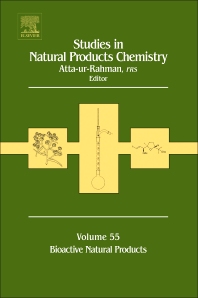