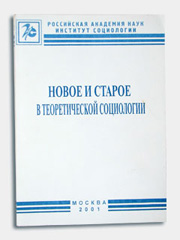 The article is concerned with the study of a number of illustrated books of World War I ("the Great War documents") which were edited by the right wing Weimar intellectual Ernst Junger. It is his concept of the Total Mobilization which allows me to demonstrate a genetic connection between photography and cinema as "modern mass-media" and the phaenomenon of a technical war. For Junger a technical war and technology in general are the art and way, in which the figure of The Worker is mobilizing the world and aims for a global dominance. Thus the illustrated books of the Great War appear as documents of a global transformation and indicate a new heroic experience of a modern technical reality comparable with films of Dziga Vertov, Leni Riefenstahl or Fritz Lang.

Идея Абсолюта в этике Л. Витгенштейна
Данько С. В. В кн.: Философия. Язык. Культура (Вып.2). Вып. 2. СПб.: Алетейя, 2011. С. 133-144.
Философия в истории высшего образования
Руткевич А. М. Гуманитарные исследования. WP6. Высшая школа экономики, 2014. № 02.
This essay considers the history of European higher education in its relationship with the history of philosophical thought. Philosophical and rhetorical schools in Antiquity, Medieval and Humboldtian University, the contemporary mass University were and remain the institutional forms of the higher education of our civilization. Each stage presupposes a number of philosophical ideas about the world and man’s place in it; philosophical education itself engaged into manifold relations with other disciplines and with the needs of these epochs.
"Неудобная" классика социологии XX века: творческое наследие Ирвинга Гофмана
Вахштайн В. С. Гуманитарные исследования. WP6. Высшая школа экономики, 2006. № 05.
«Embarrassing» classical legacy in sociology is the totality of works recognized as classical but unsettled in sociological canon and distant away from classical theoretical mainstream. This paper is aimed at investigation of such “non4classical classicality” particularly represented by works of Erving Goffman. Based on sociology of everyday life theoretical findings, this paper dedicates to one of the most significant problems in modern science studies, the problem of classicality. That problem is crucial in sociology. As a result of long4drawn debate about classics (R. Merton, J. Alexander, R. Collins) the “secluded model of classicality” was firmly established in social science. According to that model classical legacy as any other social fact must be explained by social reasons (mainly by social circumstances of classical works reception and valorization). The author is trying to develop alternative —“sociological, but non4sociologistic” — logic of analysis. Suggested approach underlines specific transcendence of classicality, bearing two4way relations between the realm of ideas and the realm of their social .
Семь лекций по истории социологии
Гофман А. Б. М.: Университет, 2003.
Hegel’s “Objective Spirit” and its Contemporary Relevance for the Philosophy of Economics
Boldyrev I., Herrmann-Pillath C. Humanities. HUM. Basic Research Programme, 2012. No. 05.
This paper explores the implications of the recent revival of Hegel studies for the philosophy of economics. We argue that Hegel’s theory of Objective Spirit anticipates many elements of modern approaches in cognitive sciences and of the philosophy of mind, which adopt an externalist framework. In particular, Hegel pre-empts the theories of social and distributed cognition. The pivotal elements of Hegelian social ontology are the continuity thesis, the performativity thesis, and the recognition thesis, which, when taken together, imply that all mental processes are essentially dependent on externalizations, with the underlying pattern of actions being performative. In turn, performative action is impossible without mutual recognition in an intersubjective domain. We demonstrate the implications for economic theory in sketching an externalist approach to institutions and preferences.
Язык и мышление в философско-лингвистических учениях В. фон Гумбольдта и Х. Штайнталя
Романенко Е. К. Философские науки. 2010. № 8. С. 108-121.