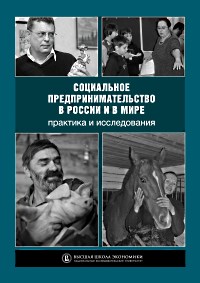 The theoretical basis of work is the notion of legitimation as a complex mechanism of social approval of a new phenomenon taking place with the active participation of different social groups and structures, able to influence its final form. In the focus of the empirical analysis the representations of social entrepreneurship that main actors of its legitimacy in Russia have. Among them are: the state, foundations, NPOs and business. We assess the (in)consistency between their representations as well as the reflection of these representations in the characteristics of existing organizations of social entrepreneurship (social enterprises).

Business, government and NPOs are understood as external actors of social enterprise legitimation, as without their recognition the legitimation will not take place. In turn, social enterprises, regardless of whether they come from for-profit or non-profit sector, are seen as objects of legitimation, or as a new actor, not identical to any of the above. It is shown that the contradictions in the positions of key actors can lead to mutually exclusive projects of legitimation of a new phenomenon, so that they will undermine the cognitive and moral legitimacy of each other. The empirical data include the results of the authors survey of 202 social enterprises.

Beijing Forum（2014）the Harmony of Civilizations and Prosperity for All—China and the World:Tradition, Reality and Future
2014.

SOCIAL ENTREPRENEURSHIP IN RUSSIA: KEY PLAYERS AND DEVELOPMENT POTENTIALITY
Nefedova A. SCIENCE, TECHNOLOGY, INNOVATION. SCIENCE, TECHNOLOGY, INNOVATION. НИУ ВШЭ, 2015. No. 51.
This Article gives an overview of different approaches to the definition of social entrepreneurship and contains the findings of the survey on the organizational field of social entrepreneurship that emerges in Russia. Whereas this type of business is institutionalized in the economy of the U.S. and certain European nations, where special laws are developed for it and significant tax benefits are afforded in certain cases, it is in an infant state in the Russian society.  Its progress in the Russian economy will largely depend on the actions taken by the players in the emerging organizational field, not only on socio-economic and historical conditions. A series of expert interviews at the first study stage resulted in identification of the main players, in particular, Our Future – the foundation for regional social programs that served as the monopolistic source of financial support for social entrepreneurship during the study. To find out what social entrepreneurship model is taking shape in Russia, 186 applications filled by different organizations for support to social entrepreneurship financing were reviewed in three years of the Foundation’s business. The review suggested that the Foundation mostly backs up the social programs capable of becoming financially independent from external sources.
Социальные фондовые биржи - инвестиционная инфраструктура «третьего» и «четвёртого» секторов экономики
Богуславская С. Б., Дёмушкина И. А. В кн.: Экономика и управление: Сборник научных трудов. СПб.: Издательство СПбГЭУ, 2015. С. 167-178.

This article aims to provides a theoretical overview of social stock exchanges, as innovative tools of social investment attracting. In the article we define functions of SSEs, its main features and compare SSEs with traditional stock exchanges.

Dependent and Independent social enterprises: a comparative study of organizations in international perspective
Oberemko O. A., Moskovskaya A. A., Chernysheva M. Munich Personal RePEc Archive. University Library of Munich, 2014. No. 54893.
The paper is dedicated to organizational dependence – independence of social enterprises (SEs) taking into account their multifaceted nature and complex business models shaping in line with the task of solving social problems at the crossroads of market, not-for-profit activity and state regulation. The paper is aimed at theoretical and empirical clarification of organizational nature of SEs on the basis of the international comparative study. We aimed to clarify the following issues: - To what extent the SEs in different countries (macro-regions) are oriented to the distinct forms of partnerships and do any of them have special bias to the state? - What factors play the main role in the character of a SE partnership (interactions) with stakeholders? - Do partnership forms relate to the level of independence of a SE from some bigger organizations or from the state? - Can we say that “independence” is most likely a characteristics of predominantly market oriented SEs (in terms of business model choice)? As the sampling frame of the survey we used the database of the fellows of Ashoka International network — the largest organization supported the leaders of social entrepreneurship worldwide. Respondents filled online a formalized questionnaire with 76 questions, and for the period from May through November, 2012 we received 128 questionnaires from 38 countries worldwide filled in English or Spanish. The subject of the research is social and economic activity of the SEs including strategy formation, assessment of condition of the target social groups, fundraising, partnership with other organizations, interactions with local and central governments, social, economic and institutional barriers of organizational activity. The data were processed with a SPSS package.
Social innovation
Krasnopolskaya I., Minnigaleeva G. A. In bk.: Global Encyclopedia of Public Administration, Public Policy, and Governance (Living Edition). Cham: Springer. P. 1-6.

COMPARATIVE ANALYSIS OF SOCIAL ENTREPRENEURSHIP IN SERBIA, RUSSIA, EUROPA AND IN THE WORLD
Faculty of Business Studies and Law, University „Union-Nikola Tesla“, 2018.

The article proposes a definition and empirical grounds of social enterprise fit for identify and clarify social effect of such businesses. Based on the study of 15 companies, operating mainly in small and medium towns of Russia, analyzes the performance of managers, for the development and creation of new rules and practices that are significant for the achievement not only production, but also for social purposes. The proposed typology of social enterprises that differ in their socio-cultural projects, and describes the forms of existence of such projects.