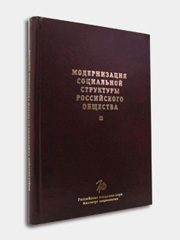 Effects of recent economic crisis have been widely discussed in various scientific and popular literature. But they were not adequately calculated and empirically evaluated. This article presents measurements of the crisis impact on three categories of households, including families of employed and unemployed, families with children and families with pensioners.

Население России до 2025 года
Денисенко М. Б. Pro et Contra. 2012. Т. 16. № 4-5. С. 153-170.
Отношение пожилых людей к молодежи в условиях старения населения
Герасимова В. Ю., Козлов В. А. В кн.: Демографические аспекты социально-экономического развития. Вып. 22. М.: МАКС Пресс, 2012. С. 148-180.
Successful aging: a cross-national study of subjective well-being later in life
Zelikova Y. A. Sociology. SOC. Высшая школа экономики, 2013. No. 21.
This paper aims to identify and analyze the life course and contextual factors that influence the subjective well-being (SWB) of individuals over 60 years of age. Our research is based on the results of the 5th wave of the World Value Survey. We have investigated the level of SWB for older people at both the individual and country level. The results of our research demonstrate that the strongest predictors of SWB later in life are satisfaction with one’s financial state, health, and a sense of control, meaning the belief that individuals are in control of their lives. Besides this, the important factors of SWB for older people are the ability to establish and maintain friendly relations with other people, such as family members and friends, and to invest their own resources in positive emotions and important relationships for themselves. Older people from ex-communist countries have the lowest level of SWB. Older people from English-speaking countries, such as the United States, Canada, New Zealand, and the United Kingdom, have, by contrast, the highest level of SWB. These results suggest that the degree of modernization influences SWB levels very strongly. For older people, the country in which they live, the level of democracy, GDP per capita, freedom, and tolerance are very important. In contemporary society, the later period of life is a time for self-realization, new activities, new leisure, and new emotions. If society understands the needs of older people and provides opportunities for their realization, society can overcome the challenges caused by population aging. Only then can we discuss the concept of ‘successful aging’.
Демографические тенденции в Европейском Союзе
Щербакова Е. М. В кн.: Население России 2008: Шестнадцатый ежегодный демографический доклад. М.: Издательский дом ГУ-ВШЭ, 2010. С. 296-349.
Развитие населения и демографическая политика. Памяти А.Я. Кваши
Вып. 23. М.: МАКС Пресс, 2014.
Сколько стоит человеческий капитал России?
Капелюшников Р. И. Проблемы рынка труда. WP3. Высшая школа экономики, 2012. № 06.
Economic convergence in ageing Europe
Kashnitsky I. S., de Beer J., van Wissen L. NIDI Working Papers. 2017/02. Netherlands Interdisciplinary Demographic Institute, 2017. No. 2.
European regions experience accelerating ageing, but there is substantial regional variation in the process. This paper examines the effect of this variation on regional economic cohesion in Europe. We measure the effect of convergence or divergence in the share of the working age population on convergence or divergence in economies of NUTS 2 regions. The effect of convergence or divergence in ageing on economic convergence or divergence has been smaller than the effect of changes in productivity and labour force participation; yet, this effect was still quite substantial. Convergence of ageing leads only to economic convergence when the share of the working age population in rich regions exceeds that in poor regions and the former regions experience a substantial decline in the share of the working age population or the latter regions experience an increase. Our empirical analysis shows that in the period 2003-2012 an inverse relationship between convergence in ageing and economic convergence was the rule rather than the exception.
Влияние демографической ситуации на пенсионную реформу России
Кузина Е. Ю. Вестник Чувашского университета. 2010. № 4. С. 380-384.