Since the beginning of the market reforms in Russia, its integration into the world economy and the dependence on trends of the world economy development is steadily rising. New challenges from the world market and new opportunities for domestic producers, appeared after the liberalization of international trade, have become an important factor affecting the domestic economy. The research is devoted to estimation of general trends in trade development in Russia after it’s liberalization in 1991. The key questions we’d like to answer within the presented analysis are: 1) what were the economic conditions for development of trade in Russia after the launch of market reforms; 2) did the level of openness of the Russian Economy increased during the last 15 years; 3) whether international trade development caused long-term changes in production structure and relative prices in the Russian economy?

Language: English
Full text (PDF, 6.38 Mb)
Keywords: international tradeRussian economyeconomic and production structurespricestrade liberalization
Publication based on the results of: The Effects of Competition Policy Towards Explicit and Tacit Collusion(2013) 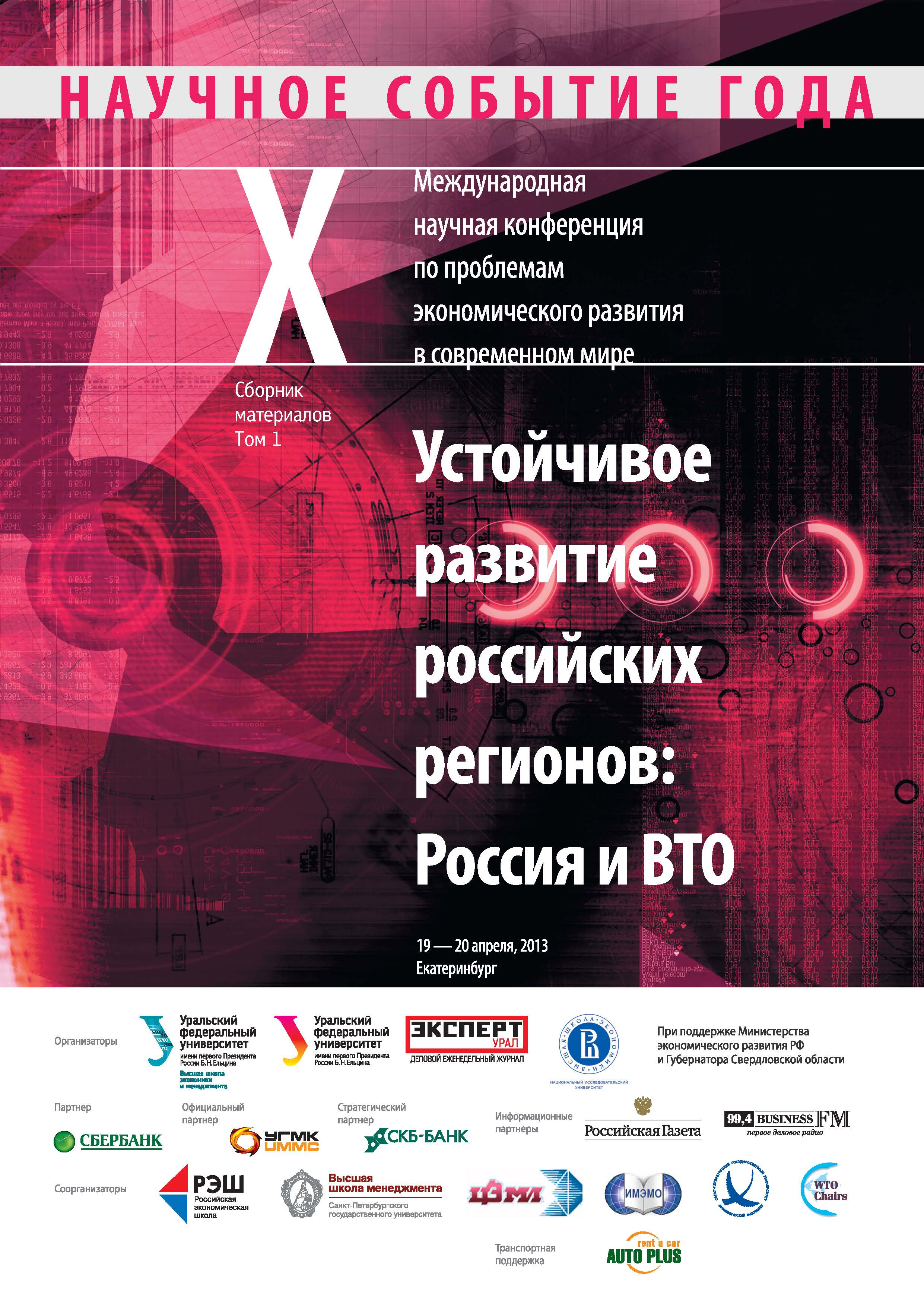 The Impact of Exogenous Asymmetry on Trade and Agglomeration in Core-Periphery Model
Sidorov A. EERC Working Paper Series. Economics Education and Research Consortium, 2011. No. 11/05E.
The project studies the Krugman's CP model in the weakly explored case of asymmetric regions in two settings: international trade and agglomeration processes. First setting implies that the industrial labor is immobile, while second one consider mobile industrial labor and long-run equilibria. Analytical study of both settings requires application of advanced mathematical analysis, e.g. implicit function theory. For international trade we find how equilibrium prices, production, consumption, wages and welfare for all population groups respond to shifts in all exogenous parameters: characteristics of utility function, transportation costs and degree of asymmetry in initial labor endowment. As for agglomeration process, it was found that the asymmetry in the population distribution simplifies pattern of agglomeration, making the direction of migration more definite, so the well-known ambiguity of final destination may disappear under sufficiently large extent of asymmetry. From political point of view, it means that under some conditions, openness of international trade may be harmful to immobile population of the smaller country
Russian Economy: Institutional conditions for survival and development
Kuzminov Y. I., Jakobson L. I., Shkaratan O. I. M.: Higher School of Economics Publishing House, 1999.

Мировая торговля товарами и услугами и ее регулирование на национально-государственном и международном уровнях. Конкуренция и ценообразование в международной (внешней) торговле
Покровская В. В. В кн.: Что есть что в мировой экономике: словарь-справочник. М.: Издательский дом НИУ ВШЭ, 2012. Гл. 2. С. 35-89.
Инновация, динамика фирмы и международная торговля
Atkeson A., Burstein A. WP BRP 55/LNG/2017. Высшая школа экономики, 2007. No. 10.
We present a general equilibrium model of the decisions of firms to innovate and to engage in international trade. We use the model to analyze the impact of a reduction in international trade costs on firms’ process and product innovative activity. We first show analytically that if all firms export with equal intensity, then a reduction in international trade costs has no impact at all on firms’ investments in process innovation. We then show that if only a subset of firms exports, a decline in marginal trade costs raises process innovation in exporting firms relative to that of non-exporting firms. This reallocation of process innovation reinforces existing patterns of comparative advantage, and leads to an amplified response of trade volumes and output over time. In a quantitative version of the model, we show that the increase in process innovation is largely offset by a decline in product innovation. We find that, even if process innovation is very elastic and leads to a large dynamic response of trade, output, consumption, and the firm size distribution, the dynamic welfare gains are very similar to those in a model with inelastic process innovation.
Экологическая политика и международная конкурентоспособность российской экономики
Герасимчук И. В., Шварц Е. А. В кн.: Экологические и социально-ответственные инвестиции в России. М.: Академия стандартизации, метрологии и сертификации, 2011. С. 145-158.
International Conference in Kyoto “Recent Trends in Russian Business”
Nureev R. M. Kyoto: Institute of Economic Research, 2012.

The book is dedicated to the general trends in Russian business.

We investigate the 2008–2009 trade collapse using microdata from a small open economy, Belgium. Belgian exports and imports mostly fell because of smaller quantities sold and unit prices charged rather than fewer firms, trading partners, and products being involved in trade. Our difference-in-difference results point to a fall in the demand for tradables as the main driver of the collapse. Finance and involvement in global value chains played a minor role. Firm-level exports-to-turnover and imports-to-intermediates ratios reveal a comparable collapse of domestic and cross-border operations. Overall, our results reject a crisis of cross-border trade per se.

2 . With the exception of medical facilities belonging to privatized enterprises.

3 . Fundholding of a primary care unit is a scheme of public health care funding that provides a virtual budget to a primary care unit (general practitioner, outpatient clinic, etc.) for purchasing selected clinical and diagnosis services, such as minor surgery, physiotherapy, and common endoscopic procedures (Langenbrunner et al. 2005). Th is scheme creates incentives for increasing effi ciency of primary care and for containing excessive supply of diagnostic and inpatient services. Fundholding is used in the United Kingdom and Estonia, as well as in some Russian regions (Kaliningrad, Samara, and Perm).