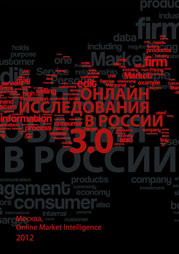 The problem of detecting terms that can be interesting to the advertiser is considered. If a company has already bought some advertising terms which describe certain services, it is reasonable to find out the terms bought by competing companies. A part of them can be recommended as future advertising terms to the company. The goal of this work is to propose better interpretable recommendations based on FCA and association rules.

We describe a new recommender system for the Russian interactive radio network FMhost. The underlying model combines collaborative and user-based approaches. The system extracts information from tags of listened tracks for matching user and radio station profiles and follows an adaptive online learning strategy based on user history. We also provide some basic examples and describe the quality of service evaluation methodology.

The Determinants of Online Merchant's Price Premium: Evidence from Russia
Evgeny A. Antipov. Management. MAN. Высшая школа экономики, 2014. No. 19.
Some Internet stores manage to charge prices that are significantly higher than market averages, therefore, obtaining some sort of price premium. This paper is dedicated to building a model that can be used to explain and predict a typical price premium that an Internet store charges for a specific product based on the information about the characteristics of the store and the features of the market for this product. Such models can provide support for pricing and assortment decisions: in particular, they allow detecting products that a store is likely to sell with the highest or the lowest markup based on price premia that are charged by stores with similar characteristics on similar markets.
Price dispersion in Internet sales: data from an online marketplace contradict lab experiments
Bazenkov N., Glamozdina E., Kuznetsova M. et al. Economics. EC. Высшая школа экономики, 2019. No. 219.
This paper considers three hypotheses about the strategic origin of price dispersion in homogeneous product online sales. The first two are the $\varepsilon$-equilibrium and the quantal-response equilibrium (QRE) in a pure Bertrand setting involving the boundedly rational behavior of sellers. The third introduces the share of loyal consumers into the model of competition. These hypotheses were supported by estimations on experimental lab data. We test the hypotheses on a set of real prices for 30 models of household appliances collected from the largest Russian online marketplace Market.Yandex.ru. In contrast to the previously reported experimental data, we found very limited support for any of these explanations. QRE showed the best performance on the data. For most of the products it accurately predicts central tendency, i.e. the mean and the median. However, the shape of the observed price distributions is not explained well by any of the models. These results pose new challenges for theoretical explanations of observed Internet prices.
Global Internet Activity and Ecommerce Survey
Чиркин К. В., Пеникас Г. И., Привалова Е. Н. SSRN Working Paper Series. SSRN Working Paper Series. SSRN, 2013
Key findings of the research are as follows: GDP is one of the key determinants of the Internet activity development; Internet users are not strong supporters of the Windows operating system; The most curious people live in Australia, and the most sociable – in Asia; Most of all mobile Internet users live in South America, and the Europeans are proponents of the conventional means for Internet communication;
Правовое регулирование спама в России
Можилян С. А. European Social Science Journal. 2010. № 1. С. 95-104.