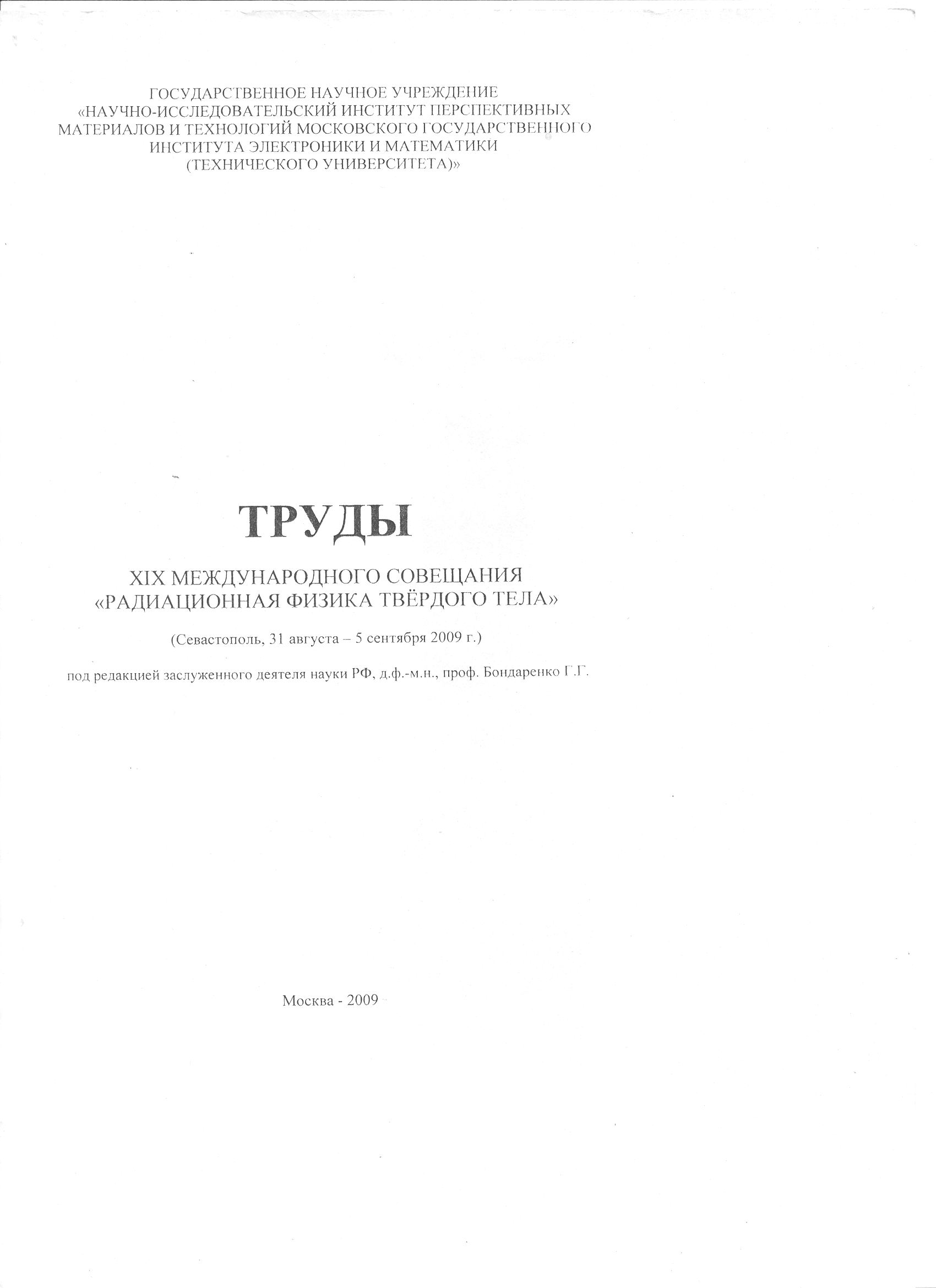 Charge Transport in Molecularly Doped Polymers: Tests of the Correlated Disorder Model
Schein L. B., Tyutnev A. Journal of Physical Chemistry. 2011. Vol. 115. No. 14. P. 6939-6947.
The correlated disorder model (CDM) has been proposed as a theory of charge transport in molecularly doped polymers (MDPs). Recently a test of the CDM was proposed: it was predicted that the dipolar disorder energy can be obtained from the slope of the log of the mobility versus square root of the electric field (the Poole-Frenkel or PF slope). We find that the dipolar disorder energy obtained from the experimental PF slopes are almost always larger than the theoretical predictions, especially for MDPs made from dopants with low dipole moments. In addition, the theory relates the dipolar disorder energy to the temperature T0 at which the electric field dependence of the mobility vanishes. We find that the observed T0 does appear to increase as the dipolar disorder increases but is in quantitative agreement (within 25 K) with the theoretical predictions for only a limited set of the measurements. We conclude that it appears that the CDM needs further development to be consistent with charge transport in organic materials.
Принятие оптимальных управленческих решений в условиях современной рыночной экономики
Кирюшин С. А. В кн.: Пути развития общества в эпоху перемен: Материалы II-ой региональной научной конференции. Н. Новгород: НКИ, 2001. С. 197-199.
Реинжиниринг бизнес-процессов
Кирюшин С. А. Н. Новгород: Центр Оперативной Печати, 2011.
Моделирование микропьезонасосов
Виноградов А. Н., Духовенский Г. Е. В кн.: Функциональные наноматериалы для космической техники. Труды 2-й Всероссийской школы-семинара студентов, аспирантов и молодых ученых. М.: МИЭМ, 2011. С. 244-252.
Введение в математическую статистику
Ивченко Г. И., Медведев Ю. И. М.: ЛКИ, 2010.
The “Conversation Partner” Phenomenon in the Dialogical I-Other Relationship
Starovoytenko E. B., Derbeneva A. Psychology. PSY. Высшая школа экономики, 2016. No. WP BRP 69/PSY/2016 .
This paper develops a new approach to study one’s relationships with others, focusing on the conditions and the effects of the dialogical nature of a person. Theoretical modelling, hermeneutics, qualitative and quantitative methods are applied. A solution for detecting the conditions of self-development and social positioning of a person, which are rooted in dialogical I-Other relationships, is suggested. The originality of the paper is found in describing the relation to the other as the I-Other relationship; in the elaborated model that highlights how different dimensions of I-Other relationships (between I and Other, I-in-Other, Other-in-I, I-in-Myself) leads to truly a dialogical mode of being; in revealing the potentials of the Conversation Partner in dialogical I-Other relationships (subjective interrelations and the significance of Conversation Partners, their activity, the fullness of the reflection of significant Conversation Partners); in the description of different “hypostases” of Conversation Partners (real, ideal, imagined, secret, I as Myself) by means of hermeneutics; in the “My Conversation Partner” method; and in the empirical study of existential and social resources of Conversation Partners. The theoretical background of the study is formed by the works of M. Bakhtin, M. Buber, M. Heidegger, J.-P. Sartre, E. Levinas, and by the works of modern psychologists such as G. M. Kuchinsky, A. V. Rossohin, E. B. Starovoytenko, C. T. Brown, P.W.Keller, H. Hermans, F. Rivetti Ваrbo. The results show the potentials of social adaptivity, affiliation, dominating, positive solitude, joy of solitude, freedom, self-transcendence, existential fulfilment are associated with the richness of one's Conversation Partners. A real Conversation Partner is associated with a greater affiliation resource, a secret one with a greater solitude resource, an ideal one with a higher potential to constructively dominate the interaction.
Термоупругие модели многослойного пьезопривода наноперемещений в лазерном гироскопе
Виноградов А. Н., Вотинов Ю. Ю., Матвеев Е. В. В кн.: Концентрированные потоки энергии в индустрии наносистем, материалов и живых систем. Труды 2 Всероссийской научной школы для молодежи. М.: Московский государственный институт электроники и математики, 2009. С. 109-119.
Практика исполнения государственный функций (полномочий) с привлечением экспертов и экспертных организаций
Минченко О. С., Плаксин С. М., Шаститко А. Е. М.: МАКС Пресс, 2009.
Влияние предварительного электронного облучения на транспорт дырок в молекулярно допированном поликарбонате
Тютнев А. П., Саенко В. С., Грач Е. П. и др. Химия высоких энергий. 2010. Т. 44. № 5. С. 394-401.

The effect of preliminary electron beam irradiation on hole transport in a molecularly doped polymer was studied with the use of the time of flight technique in the radiation_induced mode. Specimens that exhibit a plateau on their time of flight curves were selected for the study, since they suggest the occurrence of quasi equilibrium transport in the system according to the conventional point of view. In the extremely small signal mode, current transients in the case of bulk irradiation have a form corresponding to dispersive, rather than Gaussian, transport, although hole movement is observed in the presence of charged sites (trapped electrons). On passing to the moderately large signal mode (preirradiation to a dose of up to 5 Gy), the current transients undergo noticeable changes, which might be mistakenly interpreted as evidence for the influence of charged sites on hole transport in accordance with the predictions of the dipolar glass theory. In actuality, these changes are due to the effect of a space charge field and the hole mobility remains almost unchanged in this case. The appearance of the plateau on the current transients is an artifact of the procedure, and the hole transport is dispersive.