The paper considers morphology, morphosyntax and semantics of causative formation in Agul, a Lezgic language of Southern Daghestan (Russia). In Agul, the two most frequent causative patterns, periphrastic and compound causatives, apparently share one source of grammaticalization. The former are combinations of ‘do’ with the infinitive of the lexical verb, while the latter put them together as two bound stems. However, semantically 'do'-compounds belong with non-productive causatives (labile verbs and lexical causatives) and are opposed to fully productive periphrastic causatives. All non-productive causatives – only available for intransitive verbs – have parallel periphrastic ‘do’-causatives, the distinction between the parallel forms conveys the semantic contrast of direct vs. indirect causation. The paper makes an attempt at decomposing these typological categories into simpler components (intentionality, physical interaction, event structure), and provides a detailed semantic analysis of labile verbs and semantically irregular causatives. Periphrastic causatives are peculiar in their own way: they may introduce locative or ergative Causee, the choice depending on the degree of the Causee's control over the caused situation. Basing on this morphosyntactic variability, we argue that periphrastic causatives are intermediate between bi- and monoclausal constructions. 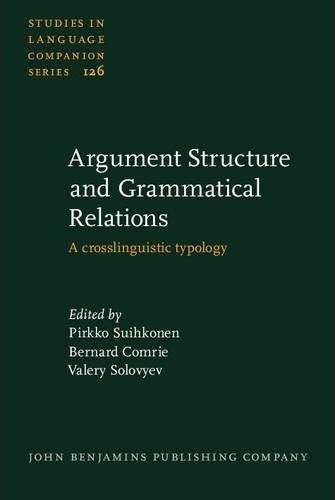 Argument structure and grammatical relations. A cross-linguistic typology
Iss. 126. Amsterdam; Philadelphia: John Benjamins Publishing Company, 2012.
Similar publications
Типология лабильных глаголов
Летучий А. Б. М.: Языки славянских культур, 2013.
Issues in Khinalug syntax: building on corpus evidence
Daniel M. Basic research program. WP BRP. National Research University Higher School of Economics, 2013. No. WP BRP 27/HUM/2013.
The paper treats several issues in the syntax of Khinalug, an East Caucasian language of Northern Azerbaijan, presenting some results of the author’s ongoing research of Khinalug syntax. The analysis is based on corpus data and covers three issues that can not be adequately accounted for by mere elicitation: the locus of expression of shared participants in a polypredicative construction; the non-coordinative uses of the additive particle; and some properties of the constructions involving the quotative particle.
General converbs in Mehweb
Kustova M. A. Linguistics. WP BRP. НИУ ВШЭ, 2015
This paper deals with the morphological and syntactic properties of general converbs in Mehweb, including the markers used to form general converbs and the alternations they undergo, periphrastic converbs, independent uses of converbs, their behaviour in combination with tensed verbs in the imperative, different strategies of how a converb clause shares its arguments with the main clause, and coordination/subordination properties of general converb construction.  The description of morphological features of the general converbs is mostly based on the existing studies of Mehweb. The description of their syntactic properties is based on an analysis of elicited examples.
Essais de typologie et de linguistique générale. Mélanges offerts à Denis Creissels
Edited by: F. Floricic. Lyon: ENS éditions, 2010.
Time reference in Russian causative constructions
Letuchiy A. Oslo studies in language. 2012. Vol. 4. No. 1. P. 31-51.

In Bagvalal (East Caucasian), native place names show strongly reduced morphological inflection. They combine with spatial suffixes identical to those used on nouns and spatial adverbs and with attributive and plural suffixes identical to those of nominal genitive and plural and thus have mixed adverbial nominal morphology. Place names are unmarked in spatial function but marked in argument position. To occur in the latter, they require a nominal head with an abstract meaning such as ‘village’ or ‘place’. Bagvalal place names are syntactically adverbs rather than nouns. Considering syntax and morphology together, they constitute a morphosyntactic class intermediate between nouns and adverbs. Mixed properties of Bagvalal place names are functionally motivated. Place names are, first of all, locations (hence spatial inflection), but also territories associated with specific ethnic and sub-ethnic groups (hence attributive and plural inflection). I conclude by briefly reviewing evidence from some other East Caucasian languages, to show that Bagvalal is not an exception.

An attractor, in complex systems theory, is any state that is more easily or more often entered or acquired than departed or lost; attractor states therefore accumulate more members than non-attractors, other things being equal. In the context of language evolution, linguistic attractors include sounds, forms, and grammatical structures that are prone to be selected when sociolinguistics and language contact make it possible for speakers to choose between competing forms. The reasons why an element is an attractor are linguistic (auditory salience, ease of processing, paradigm structure, etc.), but the factors that make selection possible and propagate selected items through the speech community are non-linguistic. This paper uses the consonants in personal pronouns to show what makes for an attractor and how selection and diffusion work, then presents a survey of several language families and areas showing that the derivational morphology of pairs of verbs like fear and frighten, or Turkish korkmak 'fear, be afraid' and korkutmak 'frighten, scare', or Finnish istua 'sit' and istutta 'seat (someone)', or Spanish sentarse 'sit down' and sentar 'seat (someone)' is susceptible to selection. Specifically, the Turkish and Finnish pattern, where 'seat' is derived from 'sit' by addition of a suffix-is an attractor and a favored target of selection. This selection occurs chiefly in sociolinguistic contexts of what is defined here as linguistic symbiosis, where languages mingle in speech, which in turn is favored by certain demographic, sociocultural, and environmental factors here termed frontier conditions. Evidence is surveyed from northern Eurasia, the Caucasus, North and Central America, and the Pacific and from both modern and ancient languages to raise the hypothesis that frontier conditions and symbiosis favor causativization.

In the paper, the classes of labile verbs (verbs which can be transitive or intransitive without any formal changes) are analyzed on the data of European and North Caucasian languages. The main conclusion is that there is a semantic difference between classes of labile verbs in the two language groups under analysis. In European languages, predicates with low semantic transitivity are labile (for instance, motion verbs and phasal verbs), while in Caucasian languages, lability is more characteristic of verbs with high semantic transitivity (verbs of destruction and similar verb classes).