Central and local media in Russia: between central control and local initiatives

This chapter  analyses the evolution of the relationship between centralized control over local media media systems and local interests at the regional level in Russia. It demonstrates that during the post-soviet period the soviet hierarchical control was reproduced as a result of the dominance of the so called “central media” over the regional media. As the political balance between federal and regional powers evolved,  so did the model of media control. From this point of view the local policy during Yeltsin’s period was shaped by the shift of power from the centre, allowing the regions to develop high levels of autonomy.  This  transformed local media into powerful agents of local politics and contributed to the high pressure on local media from different political and elite groups. Such pressures paradoxically formed more pluralist model of the press. After 2000 the power of local media was weakened, which dissociated retired local media from elite group political processes and contributed to the monopolization of local media by local authorities especially on the basis of commercial contracts between such authorities and the press. Such contracts shape considerably the control of local media by the local authorities paying media for loyal coverage of their policies.

Language: English
Full text (PDF, 662 Kb)
Text on another site
Keywords: Russian mediaregional mediaState control on mediamedia policy
Publication based on the results of: Media and sociocultural changes: a critical analysis of transformative effects of mediatization(2018) 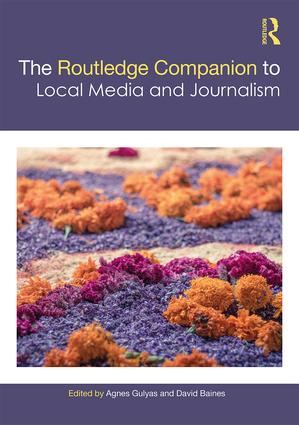 This comprehensive edited collection provides key contributions in the field, mapping out fundamental topics and analysing current trends through an international lens.

Offering a collection of invited contributions from scholars across the world, the volume is structured in seven parts, each exploring an aspect of local media and journalism that provides the framework to bring together and consolidate the latest research and theorisations from the field, and fresh understandings of local media from a comparative perspective and within a global context. The Companion reaches across national, cultural, technological and socio-economic boundaries to bring new understandings to the dominant foci of research in the field and highlights interconnection and thematic links. Addressing the significant changes local media and journalism has undergone in the last decade, the companion explores the history, politics, ethics and contents of local media, as well as delving deeper into the business and practices that affect not only the journalists and media-makers involved, but consumers as well.

For students and researchers in the fields of journalism studies, journalism education, cultural studies and media and communications programmes, this is the comprehensive guide to local media and journalism.

Governmental Crisis Communication and Media Relations under Terrorist Threat
Gryzunova E. In bk.: Media Research: Learning from the Past, Strategies for the Future. Athens: Athens Institute for Education and Research, 2013. P. 143-154.

This article represents a multidisciplinary analysis of terrorism in terms of social disruption and crisis followed by recommendations for governmental communication strategies.

This paper suggests that media piracy in Russia is a cultural phenomenon caused largely by long-standing state ideological pressures. It also questions the common approach that considers the issue of piracy in economic or legal terms. In Russia, piracy historically concerns not only copyright issues but also censoring practices, and the sharing of pirated content is a socially acceptable remnant of Soviet times. This paper uses an institutional approach to show how anti-copyright state policy was used in the Soviet time to curtail the freedom of speech. Analysis of the new anti-piracy law reveals that current state policy intended to protect copyright may also be used to control content; moreover, this analysis concludes that the new policy is not likely to curb piracy.

This chapter examines how the concept of free speech has evolved in the Soviet Union and post-Soviet Russia. It also assesses the impact of international standards on the development of Russia’s concept of freedom of speech. Along with the main legal documents, including constitutions and media laws as well as the judicial practice of the highest courts, Marxism-Leninism will be examined to help clarify Russia’s view of free speech. The chapter argues that, in Russia, the change in political regime has encouraged a reconsideration of the concept of freedom of speech  by political leaders. It shows the similarities between Lenin’s ideas and the modern Russian concept of free speech. Also indicated is the impact of international standards on free speech as superficial and dependent on political will.

This paper investigates the relationship between the Russian government and mass media businesses. With the state ownership monopoly in the past, transitioning countries do not have evolutionary experience of enforcing corporate law, transparency or protecting minority shareholder rights, and balanced response to stakeholder interests. These represent formal valuable instruments of formal economy. We examine Russia’s recent developments in ownership structure in mass media industries based on insider information – semi-structured interviews with owners and/or top managers of mass media companies from Russian regions, capital cities, and also freelancers who are not affiliated with traditional media companies. With consensus to principles of democratic developments, the share of the state ownership and non-related businesses in Russia’s mass media capital decreased dramatically. Does it mean that mass media companies are becoming independent from the state and oligarchs? We argue that it is still far from being true, and informal pressures and controls over mass media have been developed and are widely used in Russia. We state that loyalty to state/municipal/regional powers (lobbying of their interests) helps these companies to compete against “independent” media. This erosion of principles of independence of mass media in Russia is the result of a corrupted governance model.

On the Dichotomy of Corporate vs. Alternative Journalism: OWS as Constructed by Echo of Moscow
Baysha O. International Journal of Communication. 2014. Vol. 8. P. 1-20.

This article argues that we need to be more cautious with the dichotomy between “corporate” and “alternative” media widely accepted within critical media studies. This division can be misleading, especially if applied to non-Western societies. I explicate my argument using the case study of the Russian alternative radio station, Echo of Moscow, and analyzing its coverage of the Occupy Wall Street (OWS) protests. My research is based on a qualitative content analysis of 73 hard news pieces on OWS that Echo of Moscow released from September 17 to November 18, 2011. The results of my analysis show that Echo’s framing of the OWS was typical “protest paradigm” framing, which corporate media usually employ when covering social protests.