What Drives the Control Premium? Evidence from BRIC Countries

The literature on M&As provides ample evidence for the variability of premiums paid in M&As deals over time and in different types of deals. Most work has been done on the data from developed markets. Using a sample of M&A deals in the largest emerging markets (BRIC) for 2000–2015, we examine three types of factors (acquirer characteristics, target characteristics, deal characteristics). To measure the premium, the event studies method is used, therefore the data on cumulative average abnormal returns (CAAR) is adjusted to the market movements in each respective country. We focus on three levels of acquired stakes (>25%, >50% and 100%). The study contributes to a deeper understanding the differences in the size of premiums among the countries and the interaction of the main determinants which influence the magnitude of the premium. The regression results document positive drivers of the size of the premium including, the percentage of the stake and industry relatedness. Besides these stylized determinants, the premium increases if the deal is made in a crisis year and by a domestic bidder. The negative determinants include the target size, its financial leverage and the pre-bid stake of the acquirer (toehold). 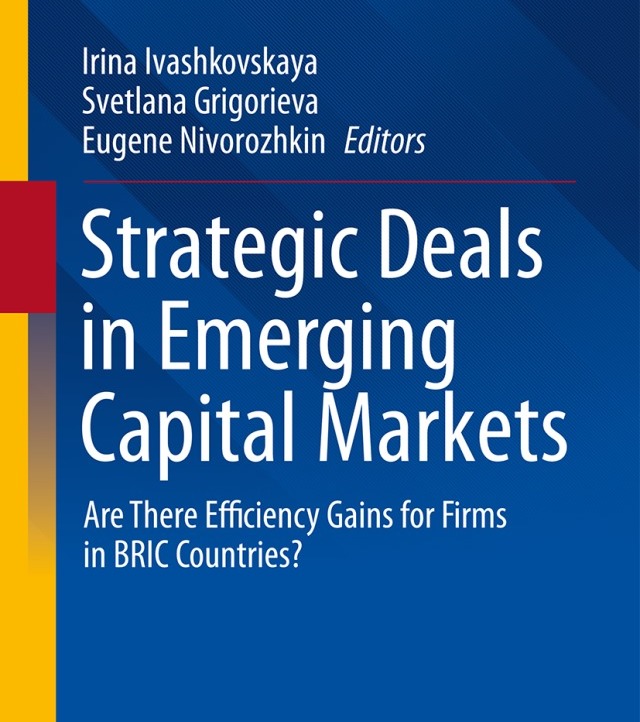 This paper studies structural transformation and its implications for productivity growth in the BRIC countries (Brazil, Russia, India, and China) from the 1980s onwards. Based on a critical assessment of the reliability and consistency of various primary data sources, we bring together a new database that provides trends in value added and employment at a detailed 35-sector level. Structural decomposition analysis suggests that for China, India and Russia reallocation of labour across sectors is contributing to aggregate productivity growth, whereas in Brazil it is not. This confirms and strengthens the findings of McMillan and Rodrik [NBER working paper 17143, 2011]. However, this result is overturned when a distinction is made between formal and informal activities within sectors. Increasing formalization of the Brazilian economy since 2000 appears to be growth-enhancing, while in India the increase in informality after the reforms is growth-reducing.

The paper undertakes an analysis of the attempts of GCC and BRIC countries to catch up in their national development to build an innovation-driven economy on which to base future growth and wealth. We conducted an analysis of GCC and BRIC countries to show the different strategies leaders have taken to try and achieve this aspiration. This paper analyses the various aspects of national innovation systems of BRIC and GCC countries, highlights similar and different approaches – and attempts to quantify their success. For example, GCC countries spend extensively on research and development, but have so far achieved less than meaningful results. Brazil, China and India are catching up to the acknowledged world leaders in innovation, but Russia is lagging.

Counter-intuitively, we will argue that the push towards an innovation-based economy is actually not dependent on total expenditure on R&D, but rather relies on the efficient allocation of investments and the rigorous implementation of innovation strategy. And we will demonstrate this by showing our ideas in relation to both BRIC and GCC countries.

This analysis raises fascinating points of discussion for those looking to build an innovation economy in other countries, and has practical implications for policy maker and policy implementers in all countries.

Handbook on Social Stratification in the BRIC Countries: Change and Perspective
World Scientific, 2013.

Constructing Tests that Can Measure and Compare the Maths and Physics Skills of Engineering Students in Russia and China
Kardanova E., Enchikova E. S., Shi H. et al. Education. EDU. Высшая школа экономики, 2015. No. WP BRP 28/EDU/2015 .
Although the number of engineering graduates has expanded rapidly in the last two decades, relatively little is known about the quality of engineering programs worldwide. In particular, few studies look at differences in the degree to which students are learning skills across different engineering programs within and between countries. There is particular interest in the investigation of the engineering education quality in the countries with the rapidly growing economy, such as BRICS countries. Until now, there was little research in this field and one of the main reasons for this is the difficulty in developing an assessment approach and the accompanying set of instruments, which would allow for measurement and international comparison. Our study describes a set of procedures for developing such an assessment framework of instruments, to measure and compare skill levels and gains across engineering programs. We first describe a systematic approach for constructing cross-nationally comparable instruments in maths and physics for students in the first two years of their undergraduate engineering programs. The approach includes both a priori procedures (including expert assessments to avoid construct, method, and item bias), and a posteriori procedures (including the psychometric analysis of test quality, differential item functioning, and identifying and reducing bias in the data). In addition to describing this set of procedures in theory, we also show how we systematically implemented these procedures. Drawing on data that we collected from over 24 engineering experts and 3,600 engineering students across Russia and China, we provide evidence that it is possible to create tests that are cross-culturally valid, equate-able, and free from bias.
Power and Plenty in the 21St Century: Neo-mercantilism in Russia and the Rising Powers
Krickovic A. In bk.: США и новые центры силы. St. Petersburg: Aletheya, 2016.

Тhe article describes the unifying role of scientific and technological progress in the global economy, in which it is one of the most significant factors at the present time ofglobal international integration.

Deconstructing the BRICs: Structural Transformation and Aggregate Productivity Growth
de Vries G. J., Erumban A. A., Timmer M. P. et al. GGDC Research Memorandum. GD. University of Groningen, 2011. No. GD-121.
This paper studies structural transformation and its implications for productivity growth in the BRIC countries based on a new database that provides trends in value added and employment at a detailed 35-sector level. We find that for China, India and Russia reallocation of labour across sectors is contributing to aggregate productivity growth, whereas in Brazil it is not. However, this result is overturned when a distinction is made between formal and informal activities. Increasing formalization of the Brazilian economy since 2000 appears to be growth-enhancing, while in India the increase in informality after the reforms is growth-reducing.