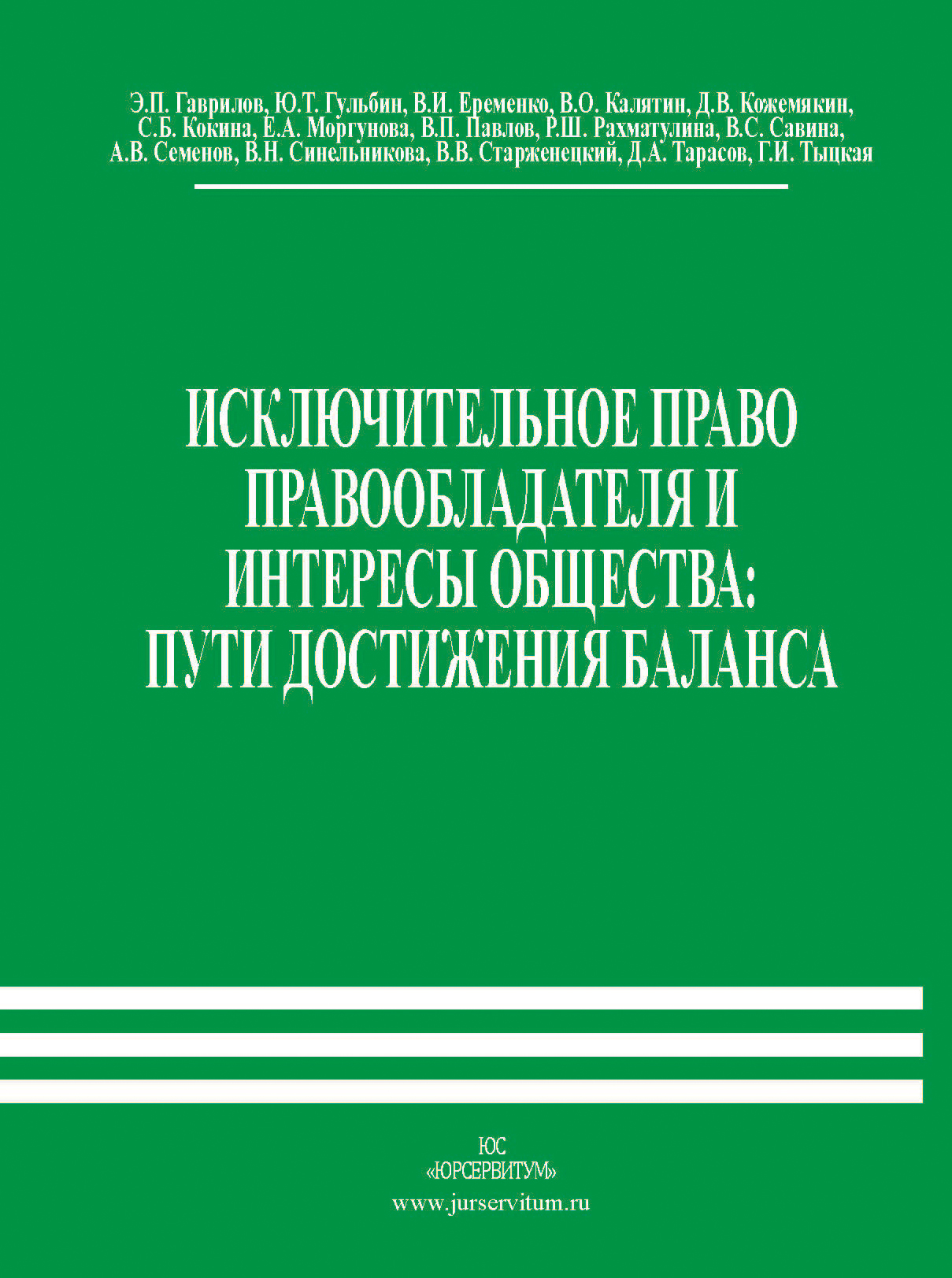 Исключительное право правообладателя и интересы общества: пути достижения баланса
Э.П.Гаврилов, В.О. Калятин, Гульбин Ю. Т. и др. М.: Юрсервитум, 2019.
Similar publications
The Evolution of Conflict Regulation in Private International Law of Russia and Poland
Yerpyleva N. Law. LAW. Высшая школа экономики, 2015
The present article examines the evolution of conflict regulation in the private international law of Russia and Poland. The author identifies the concept, structure and types of conflict rules, stressing that the conflict of laws is the most important category of private international law. A detailed classification of the types of connecting factor formulas under which connecting factors of bilateral conflict rules are formed is undertaken. The detailed analysis of conflict rules contained in Russian and Polish legislation set forth mainly in the Civil Code of the Russian Federation and the Law of Poland “On Private International Law” is conducted with the help of the comparative and formal-logical methods of research. The author also scrutinizes different conflict rules contained in the Treaty between Russia and Poland on legal assistance and legal relations in civil and criminal matters. The author concludes that modern conflict regulation in Russia and Poland is in accordance with those trends in private international law, which can be seen through the prism of the international dimension.
Правовое регулирование минимальной оплаты труда
Орловский Ю. П., Кузнецов Д. Л., Черняева Д. В. Проблемы рынка труда. WP3. Высшая школа экономики, 2013. № WP3/2013/09.
This research is aimed at analyzing the prospects of the Russian minimum wage legislation reform from an international legislative perspective. Authors study historical aspects of conceptual development in the field worldwide, examine the “minimum wage” concept definitions suggested in international treaties and legislative sources of various countries from a comparative viewpoint, suggest a methodology of the minimum wage setting procedures and systemize relevant mechanisms of enforcement. A policy of abstention from the minimum wage setting on the national level has also been studied and the compensatory instruments have been singled out and described. On the basis of the results of this research major trends in the minimum wage regulations in contemporary world have been outlined. A study of the pressing problems of the minimum wage legal regulation in the Russian Federation and of the suggestions for its further development are given in a separate section of this paper.
Tax Rules in Non-Tax Agreements
Amsterdam: IBFD, 2012.
Tax rules in non-tax agreements is a topic of great relevance in practice. Yet, up to now, this area of tax law has been generally neglected by researchers. The aim of this book is to close this gap in tax law research and to analyse the provisions of international agreements and similar legal instruments under international law which provide for a special domestic law tax treatment for specific individuals and international organizations.   Twenty-three national reports from countries across the globe have been compiled and are published in this volume. Seventy experts, including the authors of the national report, convened for a joint conference on “Tax Rules in Non-Tax Agreements” in Rust (Austria) from 7-9 July 2011. The national reports focus on the interaction of tax rules in non-tax agreements with the corresponding tax treaty rules. Moreover, possible matters of dispute regarding the justification of these tax rules within the legal and political frameworks of the different states are given much attention. The objective of this book is to show the relevance of tax rules in non-tax agreements, to highlight problematic issues and to encourage future research in this important field of tax law.
Современное развитие источников международного частного права
Ерпылева Н. Ю. В кн.: Simms ubi suinus. Международное право XXI века: мир и безопасность, сотрудничество, права человека: Liber в честь профессо Amicorum в честь профессора Людмилы Петровны Ануфриевой. М.: 2016. С. 167-179.

The present article examines the main peculiarities of modern development of the sources of Private International Law, including domestic legislation, international treaties, international customs, case law, legal acts of international organizations and lex mercatoria. The author proved that at present the main trend of the development of domestic legislation as a source of PIL consists of its intensive and extensive codification. Another trend of the development of PIL sources undermines the enlargement of instruments of non-state regulation of private international relations, namely, lex mercatoria as an example of soft law. As far as the development of PIL sources in the European Union is concerned, two trends may be observed simultaneously: firstly, formation of European conflict law and European Civil Procedure by instruments not only having legal force but also having direct application on the territory of the EU Member States (regulations); secondly, formation of the unified material rules regulating private relations amongst different subjects on the territory of the EU, which are contained either in regulations, or in non-binding documents.

Introduction: efficient legal protection of intellectual outputs is essential for the dynamic development of modern society. The list of intellectual property objects is not intended to be exhaustive, separate outputs lose their relevance and become excluded from the list of protected objects, while new ones, on the contrary, are added to it. Purpose: this work aims to identify the tendencies regarding the extension of the range of intellectual property objects at the beginning of the 21st century, and to define the scientific and technological progress results that were granted protection under the influence of the Fourth Industrial Revolution and other factors. Methods: the method of formal logic, historical, comparative legal, systemic structural and formal dogmatic methods were used in course of the analysis. Results: international legal regulation does not provide clearly-defined guidelines to restrict the sphere of intellectual property. This factor undoubtedly contributes to expanding the list of its objects. At the beginning of the 21st century, law-based lists of copyrighted works did not include any new items. The institute of neighboring rights is most dynamically developing in the Law of the European Union. The Directive on Copyright in the Digital Single Market proposes recognizing two new neighboring rights. One of them is the right of the press publishers for online use of their publications by the news aggregators. The other neighboring right included into the draft Directive was the right to coverage of sporting events. However, in February, 2019, the provisions on this right were excluded from the Directive. In our opinion, biomedical cell products constitute new objects of civil circulation that require their own legal regulation as intellectual property constituents. Conclusions: intellectual property law cannot and should not undergo changes with the emergence of every new kind of objects. The contemporary challenge facing civil jurisprudence and the legislature is to formulate universal regulations that would make it possible to protect the rights of authors and developers of technological solutions even at the stage of experiments.

Undoubtedly, BRICS have a considerable influence in the world. BRICS leaders decided to create a new financial and economic architecture and, hence, documents and resolutions adopted by BRICS countries and the G-20 documents are of great importance. A detailed analysis of these documents enables us to trace the turning points in the development of BRICS countries, to recognize key factors, influencing further effective cooperation and collaboration.

In this regard, it seems appropriate to study, within this research, the role of BRICS in the international scene, analyzing the importance of joint BRICS declarations on one of the numerous lines of collaboration and cooperation within BRICS, viz. problems of reforming of international monetary and financial institutions and a new financial and economic architecture establishment.

Certainly, the establishment of a new financial and economic architecture is extremely complicated and debating. In this article the author shows that the BRICS countries came to the conclusion that it is necessary to not only reform the existing institutions but also to establish new ones, such as for example the BRICS Development Bank.

This chapter is based on the national report, presented at a joint conference on “Tax Rules in Non-Tax Agreements” in Rust (Austria) from 7-9 July 2011. This chapter focuses on the interaction of tax rules in non-tax agreements, signed by Russia, with the corresponding tax treaty rules. Moreover, possible matters of dispute regarding the justification of these tax rules within the legal and political frameworks of Russia are given much attention.

This book  is a collection of articles written on the results of the international scientific seminar "Legal aspects of the BRICS", organized by the University of Rome "Tor Vergata" in May 2013. Lawyers - researchers from Italy, Brazil, Russia, India, China and South Africa Republic took part in the discussion on the harmonization of the legal systems of the BRICS and prepared their works, which have been published in 2015.